In January 2012, a dive club contacted the Sea Turtle Rescue and Rehabilitation Centre at Reunion Island, Kélonia, as they had seen an injured, immature green turtle (Chelonia mydas). The animal presented with a round shaped wound on the back of the carapace (see 2012 in Figure 1) and limited mobility in the posterior flippers. The wound was healing well and was diagnosed as a shark bite based on its shape. The turtle was weighed (25kg), measured (curved carapace length (CCL) 59cm), and identified using photo-identification (Photo-ID) software developed by Kélonia (Jean et al., 2010). After eight weeks at the rescue and rehabilitation centre, the turtle was eating normally and had good blood parameters so was judged healthy enough to be released into the wild. Members of the dive club who had rescued her named her Kiki Gloria and participated in her release at the original capture site.

After the turtle was released, Kélonia continued to promote citizen science through its photo-identification program, and distributed a poster explaining how to participate to all the dive clubs in La Reunion. The program encouraged divers to send photos of sea turtles to dedicated websites (https://www.museesreunion. re/sciences-savoirs/la-photo-identification and http:// torsooi.com/index.php?page=Public.PhotoIdentification) or to search the databases themselves to identify individual turtles.

Local divers and dive clubs submitted their underwater photographs of sea turtles for photo-ID (Chassagneux et al., 2013). Some divers sent older photographs that were stored on their hard drives, which included photographs of Kiki Gloria several years earlier than her rescue by divers in 2012. Photographs of Kiki Gloria now span 2007 to 2015, allowing evaluation of the injury over time. In the oldest photograph of 2007, the characteristic wound was already visible on the rear of the carapace. However, the damage at that time appeared to be due to propeller impact rather than a shark attack. Analysis of the series of photographs from 2008- 2011 suggested that the impact of the propeller had broken the carapace and some vertebrae, which would explain the paralysis and lack of sensitivity in the hind flippers, and reduced circulation to tissues behind the lesion. In 2008 and 2009, we noticed loss of parts of the carapace and skin necrosis. In 2010 and 2011, further loss of tissue, possibly due to action of fish or other necrophages and potentially aided by a lack of sensitivity in this area, was observed. In 2012, cicatrisation appeared complete and new tissues were appearing at the wound periphery. Without photo-ID and participation of the divers, it would have been very complicated to determine the origin of the wound and link the different stages of healing.

On January 29th, 2015, Kiki Gloria was recaptured and brought back to the rescue centre because she appeared very weak and had buoyancy problems. She weighed 27kg and had a CCL of 63cm;since her first capture she had gained 2kg (~0.66kg per year) and 1.3cm carapace length. Interpretation of this data is difficult since growth rate of sea turtles is dependent on age and habitat (Limpus & Chaloupka, 1997; Zug et al., 2002; Kubis et al., 2009) and she was injured. Kiki Gloria is still recovering at the centre. The buoyancy problems have been partially resolved, and radiography revealed a pelvic disruption responsible for paralysis of the rear flippers. Nevertheless, this lack of mobility in the flippers did not prevent her making round trips between two diving spots 3km apart since 2009, as revealed by her photographs location. As her health improves, we hope she can soon be released and will still stay in the field of dive photographers along Reunion Island coasts for a long time. 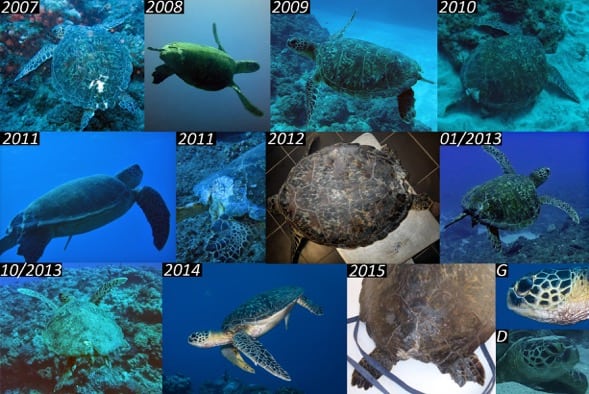