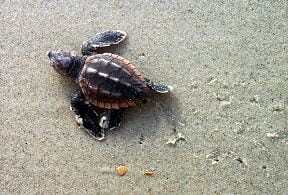 Sea turtle hatchlings usually emerge from their nests at night. They find their way to the ocean using visual cues; they move towards the brighter horizon and away from darker silhouettes. On natural beaches, the brightest horizon is the one over the ocean, due to reflection of starlight. The landward horizon usually has a dark silhouette formed by the dune and/or tree line. However, beaches that have a lot of human development usually have artificial light (from homes, businesses, hotels, highways, parking lots, etc.) that reaches the beach from landward side at night. Under these conditions, hatchlings often mistakenly move towards the artificial lights because they are brighter than the horizon over the ocean. This misdirected movement is called misorientation. Because misorientation of hatchlings can occur on any beach that has a human presence, there has been much research into how to reduce the impacts of artificial lights on emerging hatchling sea turtles. One technical solution has been to replace regular artificial lights with yellow low-pressure sodium bulbs. The light produced by these bulbs makes loggerhead hatchlings go in the opposite direction (the scientific term for this behaviour is “xanthophobia,” which means “afraid of yellow”). However, the yellow lights are not effective with other species of marine turtles. Therefore, other solutions are required. This study focuses on what happens to turtle hatchlings when they are presented with artificial light plus dark silhouette and a simulated ocean (that is, competitive cues). The work was performed in the laboratory (the hatchlings were released to the ocean a few hours after being tested in the lab). The researchers found that when bright, artificial light and dark silhouettes were presented together to the hatchlings, the hatchlings were attracted to the light, moving away from the ocean. However, when the intensity of the artificial light was reduced, darkening the silhouette, the hatchlings moved away from the light source and silhouette (i.e. in the direction of the ocean). The results suggest that on beaches where artificial light cannot be eliminated, it may be possible to reduce misorientation by increasing natural silhouettes, through dune restoration or beach vegetation restoration. Of course, the results are not final. It is important to test the hatchlings on a real nesting beach. Also, only loggerhead hatchlings were used. It would be important to test other species to ensure that increasing silhouettes on beaches is an effective conservation method. 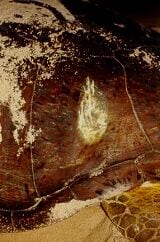 Since the inception of sea turtle conservation activities, there has been an on-going discussion on the benefits of captive rearing of sea turtles. There are many forms and variations of captive rearing, ranging from the relatively simple (such as moving eggs to a protected hatchery for incubation) to the complex (such as maintaining a closed-cycle sea turtle “farm”). The general idea behind captive rearing is that intervention, in the form of removing turtles from the wild and placing them in a sheltered environment for a period of time, helps the survivorship of turtles because they are protected from natural predators and other threats.

This study analyzes the outcome of a headstarting programme for green turtles at the Cayman Turtle Farm in the Cayman Islands, in the Caribbean. ‘Headstarting’ is a technique whereby sea turtle hatchlings are kept in captivity for several months to several years, and then released back into the wild, presumably to increase the chances that the young turtles will survive to maturity. More than 30,000 hatchling and yearling (aged one year) green turtles were subject to headstarting and then released to the wild from the Cayman Turtle Farm facilities in the 1980s and 1990s.

One potential difficulty with analyzing the impacts of a headstarting programme is the question of how to identify the headstarted turtles 15-30 years later, when they are adults. In the case of Cayman Turtle Farm, the majority of the headstarted turtles were tagged and many were given “living tags.” Living tags are simple grafts (transfers) of lighter shell from the plastron (underbelly) of turtles to the darker shell of the carapace. As the turtle grows, the light-coloured graft will also grow, effectively becoming a permanent mark indicating that it was a headstarted turtle. To date, 392 of the tagged headstarted turtles were seen again. Seven of the turtles with living tags were seen again as reproductively active adults, including 3 females that were nesting on beaches in the Cayman Islands. The time to maturity for these females was 15-17 years after release, which is several years shorter than most biologists had estimated. However, it may be the case that the headstarting procedures contributed to a faster rate of maturity. Nevertheless, these preliminary results show that at least some turtles subjected to various forms of captivity (including headstarting) survive and reproduce after release into the wild. Also, the results show that the living tags are useful for marking hatchlings for future observation as adults.
Shanker K., J. Ramadevi, B. C. Choudhury, L. Singh, & R. K. Aggarwal. 2004. Phylogeography of olive ridley turtles (Lepidochelys olivacea) on the east coast of India: implications for conservation theory. Molecular Ecology 13: 1899-1909.

All sea turtle species except for the flatback turtle are globally distributed. For instance, the olive ridley sea turtle occurs in the Atlantic, Pacific and Indian Oceans, with nesting populations found in West Africa, eastern South America, western Central America, Australia, India, Sri Lanka, to name a few. Given their wide distribution, the question arises “How related are different populations of sea turtles?” This can be answered by studying the genetics of sea turtles, to see whether or not different nesting populations of a single species have any genetic similarities.

In the case of olive ridleys, an initial study published in 1998 by Brian Bowen et al. found that nesting populations in different oceanic regions had different types and amounts of genetic markers, or unique codes in their DNA, suggesting that nesting populations are segregated. The results also confirmed that olive ridleys display natal homing, where adult females return to nest on the beaches close to where they were born. However, the samples from South Asia that were used in the study only came from Sri Lanka, so it was not possible to ascertain the relatedness of olive ridleys that nest along the east coast of India and Sri Lanka. This new study focuses exactly on that question.

The results show that although olive ridleys from Madras to Gahirmatha share similar genetic markers (called haplotypes) and likely are one large regional “stock” or population, they are also different from all other olive ridley nesting populations that have been studied to date. Olive ridleys from the east coast of India are different genetically even from olive ridleys nesting in Sri Lanka. The study also found that the olive ridleys on the east coast of India are the closest relatives of their sister species, the Kemp’s ridleys found in Mexico, suggesting that these might be the ancestors of olive ridleys in the Pacific and Atlantic Oceans. The study results support the idea that regional nesting aggregations should be managed on a case-by-case basis, because they have unique genetic, behavioural and morphological characteristics. One important point is that these results are based on mitochondrial DNA, which is passed on from mother turtles to the hatchlings and therefore cannot provide information on the genetic contribution of males.

In many countries marine turtle eggs are purchased from licensed collectors and then incubated in a protective environment. In most cases this is done to save eggs from consumption or predation and increase the production of hatchlings. There have been numerous and ongoing debates for decades about the use and abuse of hatcheries as a conservation tool to protect marine turtle eggs. However, most of the debate has centered on the conservation merits of hatcheries, and there have been comparatively few discussions about the economic and social benefits and/or costs. In their recent paper, authors Clem Tisdell and Clevo Wilson examine the economic and ecological impacts of marine turtle hatcheries in Sri Lanka. Their study is important for the management of marine turtles in other nations that use hatcheries as a management tool because hatcheries are often expensive to establish and maintain, are commonly located in or adjacent to villages with low socio-economic standing, can be used as ecotourism sites, and are virtually always dealing with the conservation of remnant populations of marine turtles. Their main finding was that open-cycle hatcheries – those that take eggs from the wild and incubate them in protective environments – can produce balanced economic and environmental benefits if they are properly managed. However, if (1) the reasons for the development of hatcheries are not conservation oriented, (2) the conservation ‘need’ for the hatchery does not exist, or (3) poor ecological and/or economical practices are employed, then hatcheries do not necessarily result in positive conservation benefits. The authors also warn that when hatcheries purchase eggs from collectors a market value is established. This often leads to the value of eggs increasing and the subsequent disruption or alteration of local community economies. Hence, increased economic reliance on hatcheries serving as local tourist attractions or the consequent need to purchase eggs from collectors can, if not well-managed, lead to near total reliance on hatcheries for conservation. In these cases it makes the eventual transition from hatcheries to in situ beach management difficult. 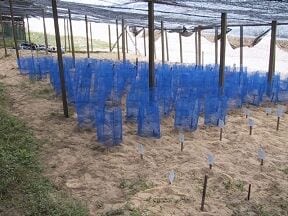 It is often stated that green turtles are long lived animals – but just how long they live for has not been estimated. This recent paper, one of a series on population modeling by these authors, investigates the survivorship of green turtles in an environment that has no major artificial threats. This study is important because it addresses a substantial knowledge gap. While a majority of the research on green turtle survivorship has been conducted either in areas where adult sized turtles are hunted for consumptive use, or on the egg/hatchling stage of the life cycle, this paper is one of few that describe survivorship in the intervening years.

These data are important for people involved with marine turtle management because they provide a quantitative estimate of natural survivorship, and therefore allow more accurate demographic models to be developed for green turtle populations. Such data could be used to compare annual survivorship in populations impacted by various threats such as egg harvest. Similar long term studies such as this one are essential if we are to develop better management strategies for marine turtle populations that are subject to human impacts.