PERCEPTIONS OF LOCAL STAKEHOLDERS ABOUT MARINE TURTLES ON THE SINDHUDURG COAST OF SOUTHERN MAHARASHTRA, INDIA

Five sea turtles are known to occur on the coast of Maharashtra (Giri, 2001). This project investigates the present status of marine turtles on the Sindhudurg coast of Maharashtra. Nesting on the Sindhudurg coast is sporadic, but there are adverse impacts on marine turtles due to killing for meat and poaching of eggs (Giri, 2001).

The study was carried out in Sindhudurg, the southern-most district of Maharashtra (15035’N to 16033’N and 730 18’E to 740 13’E), with a coastline of 121 km (Figure 1). The coastline is divided into three talukas namely Vengurla, Malvan and Deogad, from south to north. Malvan taluka is the most important fish landing area of Sindhudurg district, followed by Deogad and Vengurla. This district was specially chosen as it has a rich coastal environment and has an identified site for a marine park.

Thirteen sites were chosen for the execution of the project. There were five sites in the Malvan taluka, and four sites each in Deogad and Vengurla talukas. The sites are: Malvan taluka – 1) Achra, 2) Talashil, 3) Sarjekot, 4) Malvan and 5) Deobag; Deogad taluka – 1) Tambeldeg, 2) Padvane, 3) Vijaydurg and 4) Deogad; Vengurla taluka – 1) Redi, 2) Neevti, 3) Bhogve and 4) Vengurla. The sites were selected according to the intensity of fishing activities in the region and the population of the villages. Malvan and Deogad talukas have a large number of fishermen with mixed fishing for different types of fishes. The fishing community in Vengurla is very small with mainly shrimp fishing.

The method involved direct interviews with local stakeholders i.e. fishermen and local people. A technique of stratified random sampling was employed, where the stakeholders were divided according to their age group and occupation. Ten fishermen interviewed at each study site, including young fishermen below the age of 25 years (2), a middle age group of between 25-50 years (4) and the old age group of 50 years and above (4). The views of this last group were particularly important as they were able to compare present and past status of the coastal environment and marine turtles.

Eight local persons were interviewed at each site, including teachers in local schools and colleges (2), students (2), businessmen (2), and lay persons (2) constituting people from different occupations. The business people also included local fisherwomen in some places. The sample size was increased to 12 at study sites with higher population; here 4 teachers and 4 laymen were interviewed. Different questionnaires were used for the fishermen and the local population (see Appendix). The data were collected through individual interviews.

The leatherback turtle (Dermochelys coriacea) is locally known as ‘Kurma’, wheras the olive ridley (Lepidochelys olivacea)is known as ‘Tupalo’, The rest of the turtles are generally referred to as ‘Kasai’. The data collected through the interviews showed frequent encounters of olive ridley turtles, while fishing was common all through the study area. Green turtles (Chelonia mydas) were more common in the Vengurla and Malvan talukas compared to Deogad. The reported encounters of green turtles decreased northwards. The leatherback turtle was encountered near the Malvan taluka and less in the Vengurla and Deogad talukas. There were no confirmed records of loggerhead (Caretta caretta) and hawksbill turtles (Eretmochelys imbricata). Encounters with turtles were reported mostly in the post-monsoon season after September whereas some believed that there was no particular season for nesting. The fishermen mostly encountered marine turtles entangled in their gear in the morning or at night. The average curved carapace length (CCL) of the marine turtles encountered by the fishermen ranged from 45 – 65cm. The weight was reported to be from 15 – 100 kg. Almost all of the interviewees reported less than five encounters with marine turtles per day. All fishermen reported turtle nesting on the beaches near their villages.

There are not many reports of the sighting of marine turtles on the coast of Sindhudurg in recent years. The sightings reported in the study area were of a leatherback turtle at Chiwla beach in Malvan and of an olive ridley turtle at Deobag; in both cases the turtles were caught in dragnets. Two young green turtles (CCL – 25cm and 45cm) were found in two separate wells near the shore at Neevti where they had been kept for consumption at a later time. These were also caught in a dragnet. One dead turtle each was encountered at Vengurla and Malvan, the former a green turtle (CCL – about 90cm), and the latter an olive ridley turtle (CCL – 65cm). The head of the green turtle was missing, while the ridley had a broken carapace with intact costal scutes and damaged central scutes.

Fishermen were aware of the legal protection for marine turtles; they denied poaching of marine turtles and said they set turtles free whenever they got entangled in their fishing gear (almost 100%). Trade in turtle products is very common along the Sindhudurg coast and both fishermen and local people actively participate in it. Not a single village was found where there was no turtle trade. Mainly, turtle meat is consumed; there are also superstitions about its medicinal value in treating bone disorders. The eggs are sold at approximately Rs 2 each, although there are some reports of eggs being sold at the rate of Rs 5 per egg. The meat is usually not sold due to the fear of being legally punished but in some places the whole turtle is sold for Rs 250-500; this was reported mainly from the fishing town of Malvan. Reports suggest that if a turtle is encountered at sea, it is killed and its meat is packed in containers, and the leftovers are disposed at sea to avoid detection. The leatherback turtle is mostly not harmed. Turtle Excluder Devices (TEDs) are not used or known.

Interviews with the local population

There are some conservation efforts for marine turtles in Deogad taluka (Padvane and Tambeldeg villages) where the forest department and local people have come together to protect the nests of the marine turtles. There are some places where the fishing activities are minimal, where locals can earn their livelihood through tourism and thus benefit financially from extending protection to marine turtle nests. Such programmes are worth trying at Kolamb, Bhogve, Tambaldeg, and Padvane. Daily surveys must be carried out on the nesting beaches to find the nests before poachers or predators do. Some areas that have less fishing activities and potential as nesting habitats should be declared as community reserves. In-situ conservation practices, as seen in Tambeldeg and Padvane, should be encouraged.

Acknowledgements: I would like to thank Prof J. S. Samant, Head, Department of Environmental Science, Shivaji University, Kolhapur, for guiding me through this study. I would like to also thank Sujeet Kumar Dongre, Vijay Parbat, Suhas Waingainkar, N.S. Daptardar, R.P. Jadhav, the fisher folk, local people and all the other stakeholders who were interviewed during the study, for the kindness that they have shown, by giving me information about the target fauna and extending their support whenever it was required. 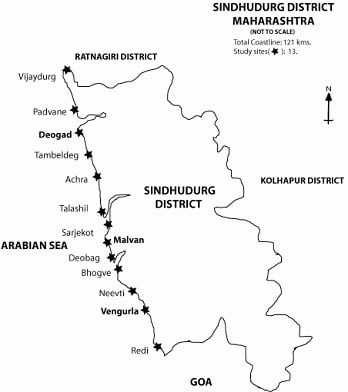 Figure 1: Map of the Sindhudurg coast of
Maharashtra on the west coast of India

2) During which time of the day do you go out for fishing?
a) Mornings, b) Evenings, c) Afternoons, d) Nights

5) Do you encounter any sea turtles while fishing? Yes/No.

17) For what purpose do you think the turtles visit the coast?
a) For laying eggs, b) For feeding, c) For mating, d) Don’t know, e) Any other.

21) What do the fishermen do when they encounter a turtle nest?
a) Leave it as it is, b) Collect and sell the eggs, c) Collect the eggs for household consumption, d) Use it as bait for fishing, e) Inform others.

33) Do you know that trading turtle products is a punishable offence? Yes/ No

2) What are the changes that you have noticed in the recent times near the coast that were not seen in the past? (Ten years or more)
a) New infrastructure, b) Increase in the fishing activities, c) More tourism related activities (Hotels),
d) Houses and other constructions, e) Plantations, f) Others

3) Do you know about sea turtles visiting Sindhudurg coast? Yes/ No

6) Do you know about the illegal turtle trade? Yes/ No

7) Who does this trade?
a) Fishermen, b) Local people, c) Business people, d) Any other

8) Have you ever bought or consumed a turtle egg or meat? Yes/ No