The state of Gujarat on the west coast of India is believed to harbour four species of sea turtles, including the olive ridley (Lepidochelys olivacea), green turtle (Chelonia mydas), leatherback turtle (Dermochelys coriacea) and hawksbill turtle (Eretmochelys imbricata). However, only olive ridley and green turtles breed along the Gujarat coast (Bhaskar, 1978; Kar & Bhaskar, 1982; Bhaskar 1984); the other two species have been occasionally sighted by local fishermen. Even though sea turtle research started in the late 1970s on the Gujarat coast, the work comprised short-term and rapid surveys. These studies discussed possible nesting sites (Bhaskar, 1978; Kar & Bhaskar, 1982 ; Bhaskar, 1984), threats (Frazier, 1980; Frazier, 1989) and some information on tag returns (Firdous, 1991). Though the Gujarat coast has nesting of green turtles and olive ridleys, no long-term data are available.

While the national Government of India – UNDP sea turtle project (2000-01) came up with baseline status for many coastal districts (Sunderraj et al., 2002), full breeding season surveys were not carried out in all the sites. The Centre for Herpetology, Madras Crocodile Bank Trust (MCBT), Tamil Nadu launched the UNEP – CMS sea turtle project in January 2004. The Gujarat Institute of Desert Ecology (GUIDE), Bhuj, Gujarat is one of the collaborative agencies involved in this nation-wide project for long-term monitoring, capacity building and networking of different stakeholders towards the conservation of sea turtles along the Indian coast. Though this project covered many aspects of sea turtle nesting biology, this report discusses the broad outcomes of a few project activities and their status.

One of the aims of the project was to enhance the knowledge of different stakeholders (government and non-government) and create a conservation network by providing training towards the conservation and management of marine turtles in the state. To achieve this, some of the coastal stretches in Gujarat were selected for making the coastal populace aware of the project and impart knowledge on the significance of the conservation of marine turtles. Stakeholder surveys were carried out in four districts namely Kachchh, Jamnagar, Porbandhar and Junagadh.

Co-coordinating the project with the Gujarat State Forest Department (GSFD) was another objective of the project. Therefore, implementation of the project was communicated to the state and concerned district level authorities like the Chief Conservator of Forest (state), Conservators and Deputy Conservators of Forest of Kachchh, Jamnagar, Porbandhar and Junagadh districts. Field level forest department staff like foresters, forest guards and watchers were involved in nest monitoring with the guidance of their higher authorities. Field level staff of Kachchh and Porbandhar districts were actively involved in nest monitoring, which has provided nesting data to the project.

Under this project, two training workshops were conducted in Kachchh and Porbandhar districts especially for the state forest staff. These workshops had three in-house lectures in Hindi and Gujarati and a field demonstration. In the first session, the participants were introduced to basic facts about sea turtles. The second session was on techniques to identify turtle species and monitoring of nesting beaches. The third session was on sea turtle egg collection, translocation and hatchery management. They were also taught about the advantages and disadvantages of sea turtle hatchery programmes and the need for proper management. In the afternoon, participants were taken to the nearest beach and taught how to collect data in the field. Model turtle nests were constructed on the beach with dummy eggs. They were trained to locate and identify the nests of different species. Further, they were shown how to differentiate nests that were predated and not predated along with differentiation of predators based on field tracks and signs present in and around the model nests. A field guide was prepared in the local language (Gujarati) and distributed to the participants.

Gujarat state has the longest coastline in India covering more than 1600 km and contributing around 22% of the total coastline (7100 km) of the country, of which only 500 km of coast distributed in six coastal districts is suitable for nesting (Sunderraj et al., 2002). Further, only Kachchh, Jamnagar and Junagadh had significant nesting, and these districts were selected for nesting population estimation.

Monitoring of nesting was carried out using two methods: (1) Intensive monitoring of index beaches by the project personnel, and (2) nesting survey for the hatchery programme of the forest department staff. The nesting season of the olive ridley starts in June and ends in about early November while green turtles nest between July and January (Bhaskar, 1984). However, recent turtle egg collection programmes for Gujarat State Forest Department hatcheries at Madhavpur village of Porbandher district showed sporadic nesting of both olive ridley and green turtles until March. Therefore the index beaches were monitored from February 2004 to March 2005.

A total of 31 stretches/villages were rapidly surveyed in four coastal districts and five types of stakeholders were identified. They were representatives of NGO groups, Gujarat State Forest Department staff, coastal villagers, fisherfolk and others (naturalists). These different groups of people were informed about the importance and nature of their role in the project and the work involved through informal dialogue. A total of 75 people of different stakeholder groups were contacted and meetings and discussions were held with these individuals. The groups included 18 forest department staff (FDS), 20 fisherfolk (FF), 20 coastal villagers (CV), 12 representatives of six NGOs , and a few naturalists (O) (Table 1).

In total, 58 participants took part in the workshop, which included two Deputy Conservators of Forest (DCF) of Kachchh and Porbandhar districts who inaugurated the workshop in their respective areas. The other officer level participants were two Assistance Conservators of Forest (ACF), and six Range Forester Officers (RFO). The field level staff trained under this workshop included nine foresters, 30 forest guards and 8 forest watchers (Table 2). In addition six representatives from NGOs also attended the workshop. As a result of the workshop and concern of the high nest predation pressure, the forest department initiated two sea turtle hatchery programmes on the Kachchh and Porbandhar coasts.

The Gujarat State Forest Department staff surveyed Kachchh and part of Porbandhar coast under their sea turtle hatchery programme for a period of four months covering a distance of around 50 and 70 km respectively. In Porbandhar, two new turtle hatcheries were established while one new hatchery was established on the Kachchh coast, in addition to the one on the Mandvi coast. 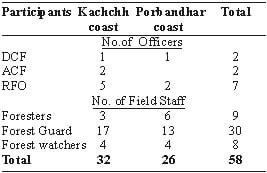 A total of 14 index beaches were surveyed from February 2004 till March 2005, which includes seven, three and four beaches on the Jamnagar (Feb 2004 – Mar 05), Porbandhar and Junagadh (Mar 2004 – Mar 05) coasts. In addition, three beaches, two in Jamnagar and one in Porbandhar were monitored for a period of seven and nine months respectively (Table 3). Under this project, a total of 17 beaches with varying length of 3-5 km covering a total distance of 73.5 km were monitored. All these index beaches were surveyed once a week while additional beaches were surveyed once a month during early morning and late evening.

Table 3: Details of index beaches and their monitoring schedule

Olive ridleys have been reported to nest between June and early November, while green turtle nesting was reported to start in July and end in January (Bhaskar, 1984). However, monitoring of nesting activity along the index beaches (April 2004 – March 2005) showed nesting of olive ridleys until March with few nests in all the months except in the month of April 2004. Green turtles nested in all the months except in May and June 2004. Both the species reported more number of nests in March 2004, which is out of their main nesting season. Thus the Gujarat coast had nesting activity throughout the year (Figure 1). 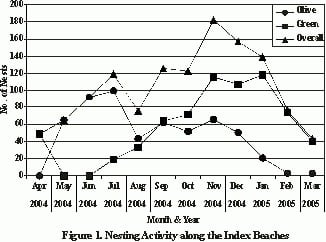 Intensive monitoring of index beaches resulted in the record of 859, 363 and 508 nests in the Jamnagar, Porbandhar and Junagadh coasts respectively. Even though all the coasts reported more green turtle nests, its contribution was more in the Junagadh (68%) and Porbandhar coasts (67%) than Jamnagar coast (61%). During the survey period a total of 1902 nests were reported with 1234 green and 668 olive ridley nests (Table 4). Green turtles constituted 65% of overall nesting while olive ridleys (35%) contributed the rest.

Under this project, 47 field level Gujarat State Forest Department staff and six NGOs were actively involved in project related activities. Two workshops were conducted to enhance their knowledge of sea turtle biology, hatchery management and overall conservation. This project facilitated monitoring of 14 index beaches, which provided full nesting season data for the first time for the Gujarat coast. Nesting of green turtles was more than olive ridleys and both species nest sporadically throughout the year. Similar species composition of 68% green and 32% olive ridley turtle nests was reported in the earlier study (Sunderraj et al., 2002). Long term monitoring of index beaches and identification of more potential beaches is essential to understand the overall nesting trend for the Gujarat coast.

We acknowledge UNEP – CMS for funding the project, Chief Conservator of Forest, Gujarat for permission, and Conservators, Deputy and Assistant Conservators of the concerned coastal districts for their logistic support. Thanks are due to all the field level forest department staff and NGOs for their active participation in the project. We are grateful to Lomesh Brahmbhatt, Dr. Pankaj N. Joshi, Muthuraman, Sanjay K. Das, and S. Rajendra Kumar for assisting us during the index beach surveys.

Bhaskar, S. 1984. The distribution and status of sea turtles in India. Proceeding of the workshop on Sea Turtle Conservation: CMFRI publication No. 18.