JUVENILE GREEN AND HAWKSBILL TURTLES IN THE WATERS OF NAINARKUPPAM, CHENNAI

After the routine morning turtle walk for the protection of the olive ridley turtles on 4 January, 2007 in Nainarkuppam, the Kadal Aamai Padhukavalargall (KAP) (Sea Turtle Protection Force) of TREE Foundation and the Nainarkuppam Turtle Guard of the Forest Department saw a rare turtle caught in the large shore net (peru valai) about 600 m from the shore. The juvenile green turtle (picture below) had a carapace length of 62 cm. There were barnacles on the head, neck, plastron and carapace of the turtle. The turtle was released safely into the sea by KAP members (C. Mahesh, S. Dhayanithi, S. Arivazhagan, M. Amarakavi and C. Gnana Sekar) and Tree Foundation (T. Raja and Supraja Dharini).

A juvenile hawksbill turtle was washed ashore at Nainarkuppam, Chennai, during the early hours of 1 December 2006. KAP members saw the little turtle slowly crawling near a boat on the shore. It was found to be a hawksbill with a total length of 38 cm.

Green and hawksbill turtles are usually found in the Gulf of Mannar and Andaman and Nicobar Islands, and do not frequent the waters of the Chennai coast. However, members of KAP say that they have seen different turtles foraging at the rock formations in the waters near Nainarkuppam village. Two dead juvenile hawksbill turtles were washed ashore near Reddykuppam and Nainarkuppam on 1 February, 2006 and 10 May, 2006, respectively. Both were judged to have been killed in gill nets from the wound marks.

The Wildlife Wing of the Forest Department has appointed one turtle guard from each of the villages, which has strengthened the community conservation of the olive ridley turtle. 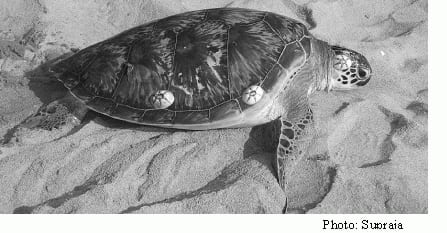