Historically, sea turtle populations have been assessed in terms of whether the number of nests laid have been increasing or decreasing (or not changing at all). While these kinds of data provide a rough index of the general status of a nesting population, they only reflect the changes occurring to a relatively small segment (nesting females) of the larger population. To more adequately assess the status of the larger population, other kinds of demographic data are needed in addition to annual numbers of nests laid. These include: numbers of different age classes (e.g. small juveniles, subadults, and adults), sex ratios, growth rates, and health status. The latter can be particularly important when trying to understand observed changes in a population. For instance, an increased number of observed stranded turtles might be linked to disease or pollution; conversely, data on physiological health of turtles might also help rule out these possible causes. The study by Hamann and his colleagues on green turtles in the waters of Northern Australia was stimulated in part by increased reports of observed turtles that appeared to be sick. To collect data, the researchers captured free swimming turtles at various locations and at various times of the year. They carefully collected small amounts of blood from these turtles and had them analysed by a veterinary laboratory for information on more than a dozen physiological values such as levels of protein, glucose and uric acid. Overall, they found that the values for the blood analyses from green turtles from Northern Australia were similar to values of green turtles studied in the Middle East, Hawaii and the northern Caribbean. Interestingly, the values for glucose of the Australian turtles were lower than green turtles studied elsewhere, although this might reflect geographic differences in the kinds of food available for green turtles. More information on foraging behaviour and prey availability across different populations is needed to fully understand the variation in glucose levels. One of the long-term benefits of this study is the establishment of a baseline of physiological data for this green turtle population. Future studies will be able to look back and compare data to those of Hamann et al., thus providing greater context in which to interpret the information.

Sometimes, female sea turtles deposit their eggs below the high tide line on a nesting beach. Excessive seawater over-wash experienced by the eggs during the tidal cycle generally leads to greater embryonic death or even loss of the entire clutch through inundation or normal sand erosion. These kinds of nests are often called doomed or suicide nests and it remains a challenge to understand why turtles would swim hundreds or thousands of kilometres from foraging grounds to nesting beaches, only to make a poor choice about where to lay their eggs. Fortunately, it is a relatively simple process for conservation workers to relocate the eggs of a doomed nest to a safer place, usually further up the beach or into a protected hatchery. If done properly, relocated eggs will successfully produce hatchlings at rates similar to natural non-doomed nests. As such, nest relocation is a powerful tool and has been reported to be partly responsible for the dramatic increase in a leatherback nesting population in the Caribbean (Dutton et al. 2005. Biological Conservation 126:186-194). However, with power comes responsibility, and indeed several reports over the years have highlighted some of the potential negative impacts of nest relocation. One possible negative impact is an alteration of the sex ratio
of hatchlings of relocated eggs, as sand temperatures tend to increase with distance from the high tide line: higher incubation temperatures usually produce more or all female hatchlings (see Morreale et al. Science 1982. 216:1245-1247). Also, some researchers have suggested that relocation of eggs to centralised hatcheries may result in predator attraction and thus increased predation of hatchlings during the first few hours after they leave the nest and enter the surf (Stewart and Wyneken. 2004. Bulletin of Marine Science 74:325-335). Both of these kinds of impacts are potentially manageable by being careful about where to place relocated doomed eggs, for example by avoiding areas that are too hot (or cool) or using several decentralised hatcheries. What about other kinds of unforeseen impacts? In his recent paper, Nicholas Mrosovsky suggests that relocation of doomed nests may have long-term genetic impacts on sea turtle populations.

This idea is based on recent research on nest site selection of individual leatherback and hawksbill turtles – it appears that females tend to “repeat” their decisions about whether to nest far up the beach or closer to water, so that there are some turtles that “prefer” to nest closer or even below the high tide line. This in turn suggests that there is some genetic component to nest site selection. If true, then relocation of doomed nests may serve as a means of “selecting” for the gene(s) that are responsible for causing turtles to lay doomed eggs in the first place. Although the argument remains speculative, Mrosovsky suggests that all of us who engage in nest relocation should reflect on both the pros and cons of this technique. He goes further and suggests that some doomed eggs might be better used for human consumption; this is likely to raise concern of sea turtle workers who wish to preserve all sea turtles and their eggs. Nevertheless, Mrosovsky’s general point – that we should carefully consider all possible impacts of a commonly used conservation tool – is important. It also adds to the ongoing debate about when nest relocation should be used.

Studies of marine turtle population genetics are rapidly gaining momentum throughout the Indian Ocean and South East Asian region, and these two recently published studies provide excellent advances to the field. However, for a non-genetics person what can these population studies tell us and how can the information be used by other researchers, managers and policy developers? While genetic studies can provide detailed information on gene flow and genetic structure, one of the most valuable management orientated outcomes is that they identify population structure i.e. which rookeries are genetically similar enough to form discrete genetic populations. These genetic populations are often also referred to as stocks or management units. The studies by Dethmers et al. and Bourjea et al. have concentrated on two different regions of the Indian Ocean and South Pacific area. Dethmers and colleagues identify 17 distinct populations from 27 rookeries sampled in the South East Asia and South Pacific Ocean. Bourjea and colleagues sampled 10 rookeries in the South West Indian Ocean and found 3 distinct populations; two in the southern Mozambique Channel (Europa and Juan de Nova) and one in the northern Mozambique Channel (comprising rookeries of Aldabra, Cosmoledo, Glorieuses, Nosy Iranja, Moheli, Mayotte, Farquhar and Tromelin).

Genetics theory suggests that gene flow between each of the discrete populations is very low or is not detectable. Hence if one of these populations was to undergo large-scale decline it is unlikely that the population would be replenished from another adjacent one. Hence the results of Dethmers et al. (2006) and Bourjea et al. (2007) can help managers define and focus management priorities such as the establishment and/or maintenance of index beaches to monitor population trends. Furthermore, a main factor when assessing population status is the level of threat the population is exposed to. Thus another important application of having genetic populations identified is that it allows managers to assess the genetic composition of turtles at foraging areas, or from which population turtles that are caught in fisheries originate. These two sets of data are important for managing healthy populations of marine turtles.

Clearly there are still gaps in our understanding of population boundaries for green turtles and other species such as leatherback and hawksbill turtles nesting in the Indian Ocean and South East Asian region. However, the capacity to undertake a coordinated approach towards understanding marine turtle population genetics is rapidly developing in the region. The challenge now will be to use the results from studies such as Dethmers et al. (2006) and Bourjea et al. (2007) as a basis for developing strategies to manage healthy populations of turtles in the region. 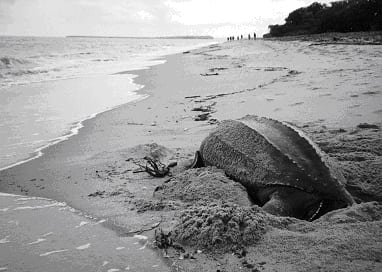 A leatherback lays a clutch of ‘doomed eggs’ close to the shoreline in French Guiana. © Matthew Godfrey