The Derawan Islands complex is located within the District of Berau in the Province of East Kalimantan. The island complex encompasses a total of 1,222,988 ha of coastal area, which stretches from the island of Panjang in the north to Mangkaliat peninsula in the south (Figure 1). The area encloses 31 small islands, and nine of them are critical nesting beaches for green turtles (Chelonia mydas). 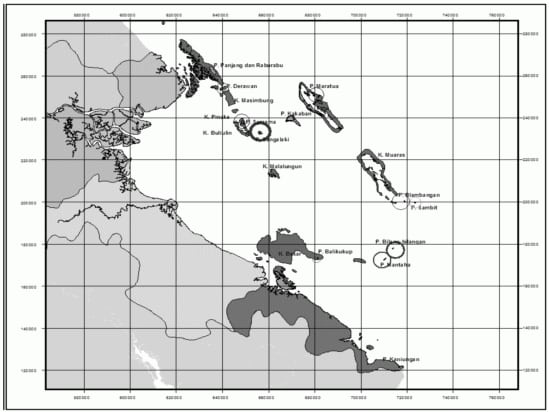 Significant exploitation of green turtle eggs has taken place since the era of Berau’s kingdoms (prior to the 1900s) in the Derawan Islands complex. Originally, turtle eggs were used as a form of tribute among members of the royal family. This custom later developed into large-scale, unregulated collection of the eggs for commercial purposes. During the Dutch colonial period, the islands’ nesting beaches were not continuously open for egg collection, but managed through open and closed harvesting periods. That practice might have allowed the survival of nesting population until today. After independence, the management of egg collection was handled by the district government, but due to political and economic instability this was not carried out particularly well.

After the 1950s, management of egg collection was transferred to individuals or private business parties by auctioning the rights to collect turtle eggs. This was formalised through a Special Regulation of the District of Berau (No. 30/1953), which was issued after the enactment of the Emergency Regulation (No. 3/1953) concerning the establishment of the division of the province into several Districts in Kalimantan. Based on this Perda (No. 30/1953), individual or business parties who were given rights to the turtles and their eggs were obliged to pay specific retributions, as well as to fullfill other obligations, such as leaving a small percentage – less than 10% – of eggs to incubate naturally, setting up controls, and not trading in turtle parts other than eggs such as meat and carapace (Adnyana, 2003). This regulation lasted for about 30 years and was replaced by Local Regulation (No. 15/1983).

Before 2002, income derived from egg collection constituted the second largest revenue for the District of Berau. Most, if not all, turtle eggs were collected and sold. Based on records from the local office of Marine Affairs and Fisheries, the total green turtle eggs collected, in all nesting islands except Maratua island per year during 1985 – 2000, was between 2,000,000 – 2,500,000. The largest proportion of turtle eggs was contributed by four islands, i.e. Sangalaki (32,9%), Bilang-Bilangan (25,6%), Mataha (17%), and Blambangan (13,7%). The other five islands, i.e. Derawan, Samama, Maratua, Sambit, and Balikukup, all together contributed 10.8% (Adnyana, 2003).

Improved management started in early 2000, when WWF initiated a turtle monitoring and outreach program on the Derawan Islands complex. This program was designed to build local support for turtle conservation through building of partnerships. Studies and dialogue were conducted and a socio-economic analysis of the value of coral reefs, sea turtles and other biodiversity in the Berau islands complex was performed to look at the possibility of a non-extractive use of marine turtles, specifically for sustainable low-impact tourism. This was used in discussions with local and central government authorities. The most critical outcome of all that work was achieved in early 2002 when Sangalaki and Derawan and their adjacent waters were declared as fully protected areas banning turtle harvesting and turtle egg collection. Full implementation of this was achieved for all nesting islands after the declaration of Berau waters as a marine conservation area in late 2005.

The official government protection of Sangalaki, Derawan and Samama in early 2002 enabled a joint team of NGOs, local government officers and community groups to conduct monitoring and surveillance activities on two islands, i.e. Sangalaki and Derawan, and at the feeding ground near Panjang Island. The main task of the team is helping the local government to protect the nesting beaches from egg and turtle poachers. This paper describes current nesting abundance indicated by total emergences and total nests protected on these two islands, as well as some findings from tagging studies. This information can help design a large regional protected area network for turtles.

An uninterrupted nest monitoring programme has been implemented since January 2002 on Sangalaki Island. To achieve this, representatives of NGOs, the local and central government, and the local community were assigned and trained in monitoring techniques. There were between 4 to 6 people employed daily for this activity on Sangalaki, and 1 to 2 people for Derawan. Every turtle emerging was counted and the resulting nests were documented. For Derawan, these activities started in June 2003.

An intensive tagging program was implemented for nesters on Derawan from March 14-June 12, 2005, as part of a long-term tagging program. All turtles nesting during that period were tagged with Inconel tags from the National Band and Tag Company (NBTC) Newport, Kentucky – USA, after they finished their nesting. Subsequent re-nesting in one breeding season was observed and recorded to determine nesting frequency and interval. Calculation of re-nesting intervals included values of 9 to 18 days only, based on the assumption that intervals of less than nine days do not follow a successful emergence and intervals of 19 to 35 days are females for which it is likely the researchers have missed a clutch (Miller, 1997; Limpus et al., 2001; Hamann et al., 2002). Nests were opened to enumerate eggs in each clutch.

Satellite tagging of green turtles was conducted during the week of June 12 – 18, 2006, to track post-nesting migratory routes. Three Telonics ST-20 A-2010 transmitters were attached to three female green turtles that were caught after nesting on June 10-11, 2006. Transmitters were attached on June 13th night and the turtles were released the following morning by Indonesian officials of government agencies involved in natural resource management. The tracking data was processed by STAT (Coyne & Godley, 2005). Coordinate pairs with Location Classes LC 3,2,1,0 & A were used to generate maps.

Table 1: Detailed history of the green turtles tagged with Telonics ST-20 A-2010 transmitters. Putri Berau carried metal tag number DO065, a serial that was used during the tagging programme in 1998 – 2000 in Derawan Island. The other two turtles received new tags. 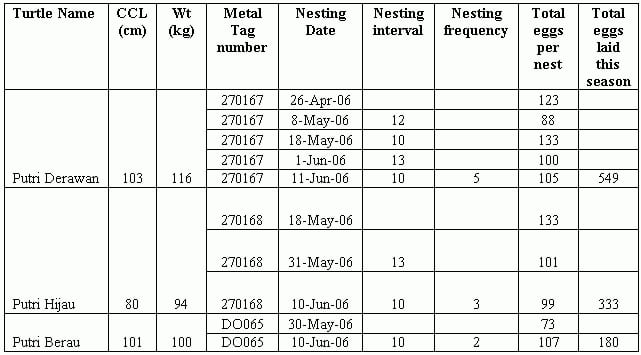 Tag recovery in the foraging ground of Panjang Island

Six field visits were conducted in 2005. Observation was done from a speedboat in waters of 5-10 m depth. Whenever a turtle was encountered, one or two workers jumped in the sea to capture the turtle and bring them into the boat. Existing tags were recorded, and turtles without tag received ‘new’ Inconel tags with serial numbers of 27XXXX. The number 27 is the code number for East Kalimantan, while XXXX represents the number of the tag (0001, 0002, etc).

Curved carapace length and width were measured and recorded. Incidental observations by the turtle monitoring and surveillance team in waters around Panjang Island were included in the data set as well as information from interviews with local communities who traditionally used the waters for fishing.

Number of nests and peak season

At both islands, peak seasons were not immediately obvious, but higher nesting activity could be observed during May – October and lower activity during November – April (Figure 2 and 3).

Comparing these data with earlier reports suggests that the nesting population in this island complex has declined. Lindsay and Watson (1995) estimated that total emergences at Sangalaki in the 1950s and 1970s were 200 and 150 turtles per night. In 1993, a census done by a Sangalaki based dive operator found fewer emergences per night (39 ± 9.4) (GF Taylor, in Tomascik et al., 1997). 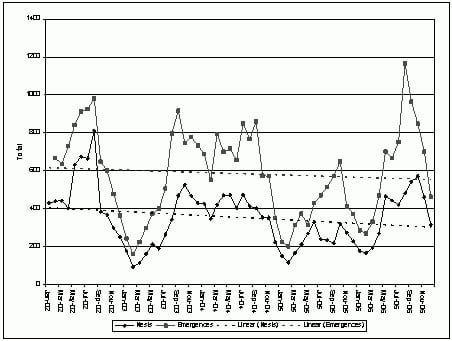 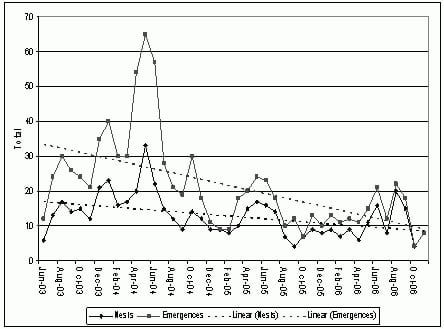 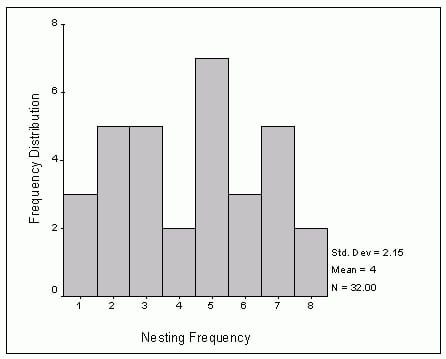 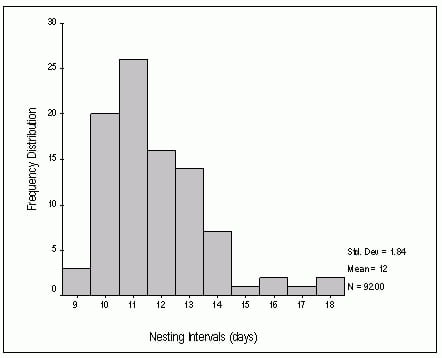 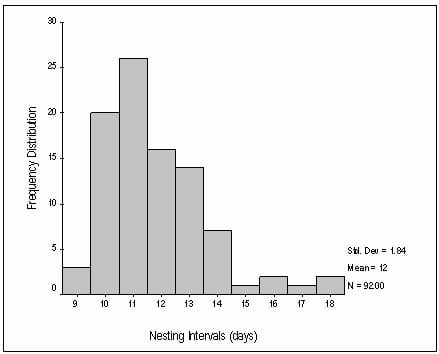 The first location fixes submitted by the satellite transmitters were received on June 14, 2006 and all turtles transmitted for about 3 months. Putri Derawan appeared to ‘wander around’ in the Derawan archipelago until June 22 after which she crossed the Sulu Sea and reached waters near the islands of Bubuan – Linawan – Timbungan – Sumisip on July 7th , an archipelago located at the southern side of Basilan island (Philippines). She kept transmitting in that area until October 4th when the signal ceased after 110 days. Putri Berau, first moved towards the mainland of East Kalimantan, and from July 13 she moved steadily along the shallow waters of East Kalimantan reaching Pulau Bumbum near Semporna, Malaysia on August 4th. The signal ceased on October 21 after 127 days.

Putri Hijau seemed to move in the same direction as Putri Derawan, but on June 23 she moved back to the west, and swam along the coast of East Kalimantan reaching waters near Banggi island of Malaysia on July 16. Her movements in that area stopped being recorded after November 19 with a total transmitting duration of 155 days. Migration maps of the three turtles are presented in Figure 7. Putri Derawan seems to have a close feeding ground with some of green turtle nesters from Sarawak – Malaysia, as does Putri Berau (Bali, 2007). Putri Hijau, on the other hand, shares foraging ground with some green turtle nesters of Sarawak-Malaysia and Khram Island, Thailand (Bali, 2007; Kittiwattanawong et al., 2007). These findings suggest the presence of food abundance for green turtles in the Sulu-Sulawesi marine eco-region. 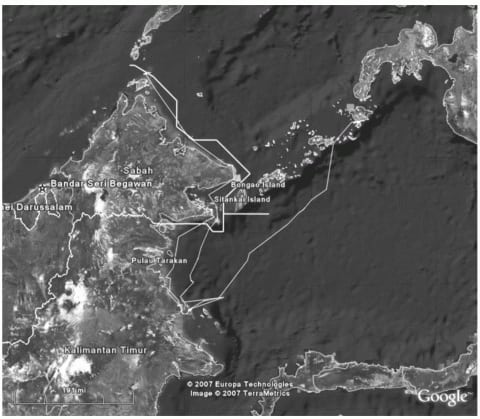 Tag recapture in the feeding ground of Panjang Island

A total of 85 green turtles were captured and observed during a tag recapture study in 2005. Their curved carapace length varied between 56 & 104 cm (88.4 cm ± 10.2 cm). Eight turtles had “old tags”. Four green turtles had tags from the Turtle Islands of Sabah Park, Malaysia and the other four turtles had 4 different tags, i.e. one each from Philippines, Terengganu, Malaysia, Sangalaki, and Derawan Island. Three other tags were obtained after interviewing local fishermen. We did not observe the turtles, but when one of us (WA) presented turtle pictures, the fishermen recognised hawksbill turtles and admitted that three hawksbills were captured within the waters of Panjang Island. The serial numbers of those three tags were 31599, 11317, and 21390, and all came from Sandakan, Sabah Park- Malaysia. Five more green turtles with tags were found by the surveillance team of Berau Marine Conservation Area during their routine patrol in January & February, 2007. The turtles carried tags from Philippines (3) and one each from Sandakan and Terengganu, Malaysia. A green turtle with a Philippines tag (RP 210 F) was also found incidentally among 141 green turtles entangled by gill nets encircled by a Hainan fishing fleet (on June 28, 2005). A summary of tag recapture data is presented in Table 3. The results obtained from this preliminary study confirm the results of satellite telemetry tracking studies conducted by Bali et al (2002), Bali (2007), and Parker (2002) as well as tag recovery reports published by Virgilio (2004). 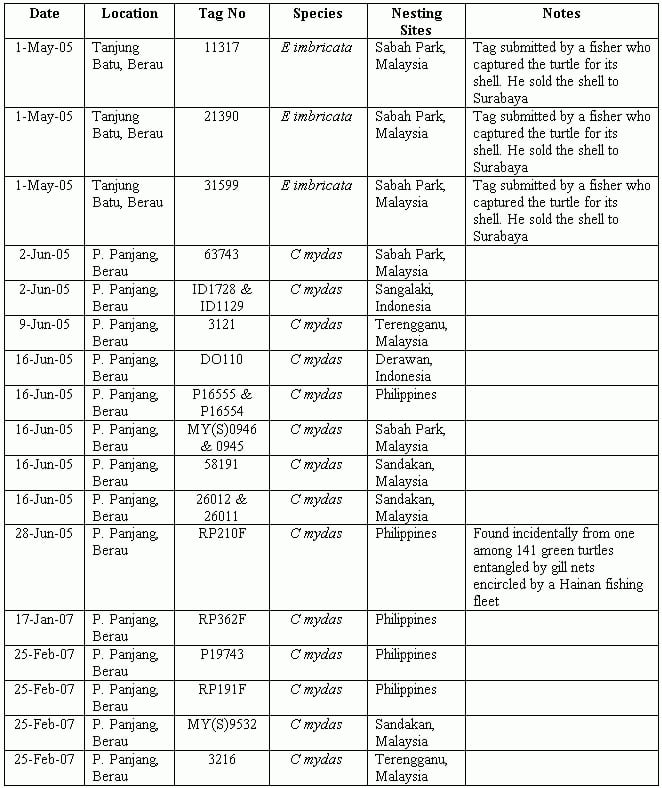