Although widely reported, twinning in reptiles, and indeed in sea turtles is a rare event (Dodd, 1988; Hartdegen & Bayless, 1999; Tucker & Janzen, 1997). Twinning in Caretta caretta has previously been reported in the United States, Japan and Australia (reviewed by Dodd, 1988), and Cyprus and Turkey (Kaska et al., 2000).

In this note, we describe what it is believed to be the first reported case in the Western Indian Ocean (WIO) region and possibly in Africa, of twinning in the loggerhead sea turtle (Caretta caretta). As part of a collaborative and concerted effort of various partners in southern Mozambique, more specifically between Ponta do Ouro and Cabo de Santa Maria (Figure 1), a nesting monitoring programme was implemented during the 2007/08 nesting season (Videira et al., 2008).

On 8 February 2008, an unhatched egg with twin fully developed embryos was discovered at Ponta do Ouro (26o50.9S & 32o53.6E). A total of 9 unhatched eggs were also found, along with 1 dead hatchling, 1 pipped egg (dead) and 2 live hatchlings were also observed. A total of 72 eggs hatched successfully. The twin embryos were initially frozen and after measurements preserved in 96% ethanol. 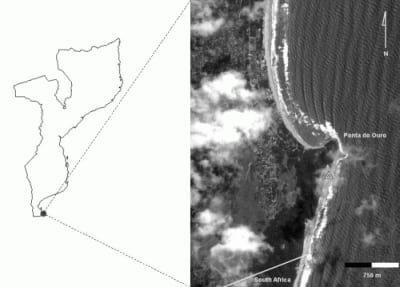 The causes of twinning in marine turtles are not yet well understood. Low temperatures have been suggested, but other environmental or genetic factors could also be involved (reviewed by Dodd, 1988). While twinning in loggerhead turtles seems to be more frequent than it is reported, we urge other researchers, especially in the WIO region, to pay more attention and report it in the literature. This could lead to possible comparisons between regions and research on the causes of this intriguing phenomenon.

Acknowledgements: Thanks are due to Angie Gullan and Kym Collins for donating the specimens. WWF Mozambique and Matthew Prophet (Maputo Special Reserve Marine Component) provided overall support to the monitoring programme during the 2007/08 season.