Maharashtra state, on the west coast of India, has a coastline of 720 km. Five coastal districts namely Sindhudurg, Ratnagiri, Raigad, Thane and the urban area of Mumbai share the coastline of Maharashtra. Of the five species of marine turtles occurring on the Indian coast, all except the loggerhead sea turtle have been reported from the coast of Maharashtra. Of these, the olive ridley alone nests sporadically along the entire coast (Giri, 2001).

In the past 15 years, various groups of researchers, state Forest Department officials and non-government organisations have been involved in the conservation and monitoring of turtle populations in Maharashtra. All the sites have recent nesting records. According to local communities, the population of turtles has declined in the last 10 years. At most of the sites, local people estimate that there were 15 to 20 nests each year, but now the number has reduced to less than five (Giri, 2001; Kakodkar, 2006).

Sindhudurg, the southern-most district of Maharashtra (15 35’N to 16 33’N and 73 18’E to 74 13’E), has a coastline of 121 km. The coastline is divided into three blocks namely Deogad, Malvan and Vengurla, from north to south. Malvan block is the most important fish landing area of Sindhudurg district, followed by Deogad and Vengurla. This district has a rich coastal environment and has a site that has been identified for the creation of a marine park and sanctuary.

The leatherback turtle (Dermochelys coriacea) is locally known as ‘Kurma’ and people from Sindhudurg coastal villages believe that it is the incarnation of Lord Vishnu. The olive ridley (Lepidochelys olivacea) is known as ‘Tupalo’ and the rest of the turtles are generally referred to as ‘Kasai’. There have been no confirmed records of loggerhead (Caretta caretta) and hawksbill turtles (Eretmochelys imbricata) on this coast. Green turtles (Chelonia mydas) have been seen in offshore waters in the Vengurla and Malvan block. The encounters of green turtles seem to be higher towards the south. Olive ridley turtles are frequently encountered. There has been a report of a leatherback turtle encountered near the Malvan block. Encounters with turtles have been reported mostly in the post-monsoon season after September, although some locals believe that there is no particular season for nesting.

Trade in turtle products does occur along the Sindhudurg coast and some fishermen and local people participate in it. Most of the people who consume turtle eggs do so for the taste of the eggs. The eggs are sold at approximately Rs. 2 to Rs. 5 per egg. Turtle meat is also consumed but meat is usually not sold due to fear of the law. However, in some places a whole turtle is sold for Rs. 250-500; this has been reported mainly from the fishing town of Malvan. There are also superstitions about its medicinal value in treating bone disorders. The leatherback turtle is mostly not harmed due to religious beliefs.

The main cause of turtle mortality in Sindhudurg district is illegal gill net and trawl fishing in the offshore waters where turtles die as incidental catch. Despite bans on mechanised fishing in near-shore waters (10 fathoms) off the Maharashtra coast, trawlers continue to operate, and mortality has risen alarmingly over the past years. The fishermen (mainly trawlers and gill net operators) mostly encounter marine turtles entangled in their gear in the morning or at night. Mortality also occurs due to ‘ghost fishing’ in rocky regions of the sea where fishermen use old nets for lobster fishing, and leave their nets when trapped in rocks.

Fishermen are aware of the legal protection for marine turtles; they deny poaching of marine turtles and say they set turtles free whenever they get entangled in their fishing gear. Kunkeshwar and Tarkarli beaches in Sindhudurg used to have relatively good nesting of olive ridleys before the development of tourism, but nesting has since reduced considerably.

The potential sites for turtle nesting and conservation in Sindhudurg district are given in Table 1 (also see Figure 1). These sites have relatively high fishing activity. Malvan and Deogad blocks have a large number of fishermen practicing mixed fishing for different types of fishes. The fishing community in Vengurla is very small with mainly shrimp fishing. 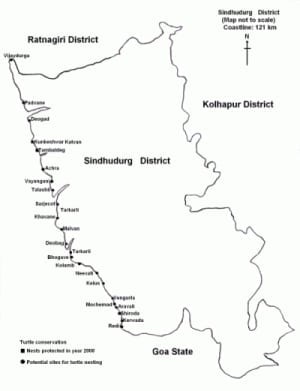 Sea turtle conservation along the Deogad coast was initiated by Dr. Daftardar, Professor at Shri. S.H. Kelkar College, Deogad, along with the Bombay Natural History Society (BNHS). The Maharashtra Forest Department, also along with the BNHS and local conservationists in Sindhudurg undertook sea turtle conservation in Deogad block. In 2002-03, actual protection work was started at Tambaldeg village and till date 1600-1700 hatchlings have been released safely. Locals from the village take responsibility for nest protection on the beach. Located nests are shifted to the hatchery and are protected with the help of the local community.

The Maharashtra Forest Department gives Rs. 500 to each person who locates a turtle nest. In places where fishing activity is minimal, locals can earn their livelihood through tourism and thus benefit financially from extending protection to marine turtle nests. Such programmes are worth trying at Kolamb, Bhogve, Tambaldeg and Padvane. Daily surveys must be carried out on the nesting beaches to find nests before poachers or predators do.

In 2005-06, Sahyadri Nisarga Mitra (SNM), an NGO based in Chiplun, Ratnagiri district, undertook sea turtle conservation in Sindhudurg district. SNM also arranged awareness programmes in potential turtle nesting beaches and villages on the coastline of this district. They conducted meetings with local people in different coastal villages and distributed information sheets to them. Posters about sea turtles and their importance were also displayed on some important beaches. The Bombay Natural History Society (BNHS), Mumbai has also been involved in turtle conservation along the Sindhudurg coast.

Table 2. Nests protected along the Sindhudurg coast in 2008.

Solutions are also available to many other problems of olive ridleys. Some areas that have less fishing activity and have potential as nesting habitats should be declared as community reserves. It is necessary to sensitise fishermen to check turtle mortality in fishing nets, and use of turtle excluder device (TED) by fishing trawlers may be considered. There is a need to develop guidelines to safeguard the species and minimise mortality caused by human activities. There is also a need to prepare guidelines for ecotourism in turtle nesting sites. In Maharashtra, activities like establishing turtle hatcheries, remuneration to the locals involved in this activity and preparation and distribution of material related to sea turtles is solely done by the contributions from the members of various turtle conservation groups. As the movement grows, financial assistance to support these activities is required.