AN UPDATE ON SAHYADRI NISARGA MITRA ACTIVITIES DURING 2007-2008

At Sahyadri Nisarga Mitra, we started the ‘Marine Turtle Conservation Project’ six years ago in Maharashtra. In 2007-2008, we have undertaken conservation and protection work at 30 villages in coastal Maharashtra and arranged awareness campaigns along the entire coastline of the state. A total of 159 turtle nests were protected and more than 3000 hatchlings were released during 2007-08. In the last six years, a total of 371 nests were protected and more than 13000 hatchlings were released safely into the sea. For the last three years, we have granted the ‘Kasav Mitra Puraskar’ (Turtle Friend Award) to individuals and organisations in recognition of outstanding work carried out for sea turtle conservation. In 2008, the award was given to Dr. Ramdas Mahajan from Kolthare (Dapoli taluk, Ratnagiri district of Maharashtra). A Gujarati translation of the book ‘Sagari Kasav’ (Sea Turtles) by Parthiv Sanghavi was also produced in 2008.

Over the last two years, we have organised an annual turtle festival at Velas village in Ratnagiri district, Maharashtra, in collaboration with the forest department and Gram panchayat of Velas. The main aim of this festival is to encourage the involvement of local communities in turtle conservation activities. Our attempt is also to increase the income of local people by encouraging their participation in the festival. Nature lovers, tourists and visitors from various parts of Maharashtra and neighboring states attend the festival. Nearly 250 visitors comprising of housewives, school and college students, doctors, engineers, journalists, photographers, social workers, nature researchers and teachers attended the festival in 2008. A cricket tournament ‘Kasav Chashak’ was also arranged at Velas and Kolthare. This encouraged the participation and involvement of the youth of the area.

Under a proposal that was accepted by the Maharashtra Forest Department for carrying out activities for the conservation of marine turtles and vultures in the area, two district level training programmes were conducted by our organization for the staff of the Ratnagiri and Raigad District Forest Departments. The training programme included lectures, slide shows and film screenings.

In 2008, we carried out activities under the ‘Mangrove Project’. Activities included arranging of slide shows, lectures, film screenings and photography and poster exhibitions in the coastal villages of Dabhol creek, to increase awareness about mangroves. Students from 25 Zilla Parishad (District Council) primary schools and 5 high schools participated in the events. We also organised a painting contest for school students at Dabhol and Kolthare in Ratnagiri district. A village meeting to create awareness about mangrove ecology was also organised at Anjarla.

In the year 2007-2008, our organisation was honored with the following awards:

Our current plans are:

Acknowledgements: We whole-heartedly thank all donors and well-wishers of SNM. We are also thankful to all NGO’s and individuals for their kind support.

In continuation of the earlier note (see Meena et al., 2007) on sea turtle hatcheries in Kachchh, Gujarat (Figure 1), the efforts made thereafter have been geared primarily towards increasing public awareness for the conservation of sea turtles (Figure 2). A flag hoisting ceremony conducted on Republic Day, 26th January 2007 at Mandvi-Kutch attracted considerable attention. The theme of the ceremony was that sea turtles are our guests and they should be welcome on Mandvi coast. Such awareness programmes have encouraged support to forest officials by the local community in conservation activities, for example, conserving turtle eggs along the coast. The Hon’ble Chief Minister Shri Narendra Modi inaugurated the newly constructed sea turtle hatchery at Mandvi on 20th September 2007 and applauded the conservation efforts that were being carried out. Such encouragement has boosted the enthusiasm of the local community and field foresters to conserve this endangered species. 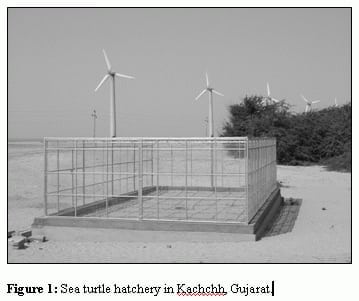 The details of the collection of turtle eggs and hatching during the year 2007-08 is given below in Table 1. 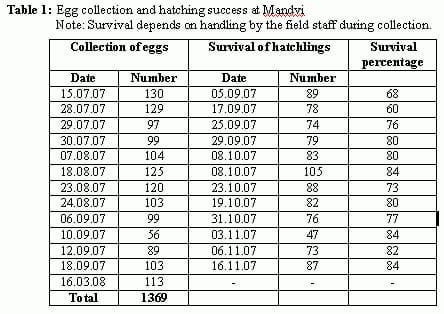 The results above clearly show that the hatching success is good. In order to minimise mortality during collection, an in situ removable hatchery will be set up this year on site.

Our experience has shown that the coordinated efforts of the local community and field staff can ensure the conservation and survival of sea turtles.

PROCEEDINGS OF THE WORKSHOP ON THE CONSERVATION OF SEA TURTLES AND MANGROVES AT KUMTA, KARNATAKA

The workshop was inaugurated by Sri G. Satish, IFS, Conservator of Forests, Kanara Circle, Sirsi who gave a formal inaugural speech. Three persons from different local communities were honored in recognition of the assistance they have provided to the Academy. The morning session began with a presentation made by N.D. Bhat, President of Canara Green Academy. He described the work that was carried out by the Academy on sea turtle conservation in Uttar Kannada. The presentation also included information about awareness programmes conducted, collection of turtle eggs from poachers and the establishment of turtle breeding centers at different locations.

Dr. V. N. Nayak from Department of Marine Biology at Karwar made a presentation on the distribution of and threats to sea turtles in Uttar Kannada and eco-friendly sea erosion control methods. Dr. Vijayakumaran of CMFRI, Mangalore made a presentation on climate change and sea turtle conservation. Sudarshan Rodriguez from ATREE, Bangalore spoke about the effectiveness of coastal legislation, in particular consequences that the proposed notification on coastal management (Coastal Management Zone Notification) would have on sea turtle conservation. An effort by Theeram (a non-government organization in Kerala) for the conservation of sea turtles was presented by Abdul Latif from the Institute of Wood Science and Technology, Bangalore. Dr. Gourish Padukone, a veterinary doctor from Bhatkal, Karnataka made a presentation on diseases that afflict marine turtles.

In addition to these presentations, Dr. Kakti from the Regional Centre, CMFRI at Karwar also elaborated on the necessity for mangrove conservation. Sri Ananth Kumar Hegde, Hon’ble Member of Parliament from Uttar Kannada presented his views on conservation of biodiversity. Manojkumar, IFS, Deputy Conservator of Forests (WL), Dandeli concluded the proceedings of the workshop by briefly summarizing the main points elaborated by the presentations made. The workshop ended with the vote of thanks by R.G. Bhat, ACF, Honavar.

The oceanic islands of Mauritius and its outer islands are ideal nesting sites for green sea turtles. In the 1800s, the Dutch reported great numbers of turtle nesting in Mauritius, but due to exploitation by man and the loss of favourable habitats for nesting, very few turtles exist in the waters around Mauritius today. There may have been occasional nesting of turtles in the past few years, but these events have not been documented. Nesting of the green sea turtle Chelonia mydas was first reported in 1977 (Thompson, 1981) at La Cambuse, in southeast Mauritius. Legal protection offered to marine turtles dates back to the enforcement of the Fisheries Act of 1980 and more recently to the Fisheries & Marine Resource Act of 1998.

After 31 years, successful egg-laying and hatching of a green sea turtle was observed in Mauritius at Gris Gris, a sublime and beautiful beach in the south of the country (Figure 1). A nesting turtle was observed laying eggs on the beach late at night on 31 October 2007 by a villager who informed the National Coast guard, the Fisheries Protection Service (FPS) and the Albion Fisheries Research Centre (AFRC) which is the technical arm of the Ministry of Agro-Industry and Fisheries. Subsequently, the nesting site was protected and on 10 January 2008, 4 hatchlings were collected from the site. The movement of most of the hatchlings (79) went unnoticed due to heavy rains, and out of the four hatchlings, 3 were released at sea and one is being reared at the Albion Fisheries Research Centre. On 25th January 2008, the nest was excavated; the clutch had 113 eggs of which 83 hatched egg shells, 21 unhatched eggs and 10 decayed eggs were noted.

This event is exceptional for Mauritius whose coastline is bearing the brunt of rapid development and brings hope that green sea turtles will visit the calm, pristine beaches in future for nesting. 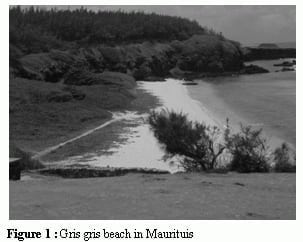