The Rushikulya River merges into the Bay of Bengal near Ganjam town in Southern Orissa. On the northern side of the river, a wide stretch of beach is the favored nesting site of olive ridley turtles. Every year from November to the end of January, mating takes place in the coastal waters. Hundreds of thousands of female turtles then visit the beach en masse to lay their eggs from February to early April. After a 45 – 50 day incubation, hatchlings creep out of the sandy nests and crawl back into the sea. When wildlife biologist Dr. Bivash Pandav visited the village of Purunabandha in 1994, he was appalled to see turtle eggs being destroyed by crows, dogs and jackals. The lack of awareness about the olive ridley turtles among the villagers prompted him to set up the Rushikulya Sea Turtle Protection Committee (RSTPC) with the assistance of the local youth in 1998. The RSTPC was officially registered in 2003. Right from its inception, volunteers including Rabindra Nath Sahu, Damburu Behera, M. Shankar Rao, Mohan Behera, Gouranga Behera, Ganapati Sahu and others became wholeheartedly involved in spreading awareness among the village folk about the ridleys, thus ensuring the involvement of the community in conservation efforts.

Today, the Rushikulya Sea Turtle Protection Committee is a 37 member strong organization with youth belonging to the 3 villages of Purunabandha, Gokharkuda and Kantiagada. The RSTPC initially started with activities like beach cleaning, beach profiling, monitoring arrival of turtles for nesting and keeping fishermen and predators away from the beach during the nesting and hatching seasons. Over time however, the activities of the RSTPC grew in leaps and bounds to include awareness programmes for the local communities and school children.

That the olive ridley turtle, an endangered species, is fast dwindling in number, is a matter of grave concern for wildlife enthusiasts. Of the 3 mass nesting sites along the Orissa coast – Gahirmatha, Rushikulya and Devi River mouth, only Gahirmatha is legally protected. The Rushikulya rookery, its unprotected status notwithstanding, has come to acquire a special significance due to the consistent arrival of thousands of olive ridleys for their ‘arribada’ over the years. In this context, the members of the RSTPC have begun to monitor the nesting population and also assist in the release of hatchlings during mass hatching. They have also encouraged visitors, research scholars from various universities, locals and especially children to participate in the collection and release of disoriented hatchlings as a part of their awareness programmes. At Rushikulya beach, hatchlings often get disoriented due to artificial lighting. The RSTPC members have therefore involved themselves in collecting the hatchlings in buckets and then releasing them in the ocean. Recently, a net has been placed along the beach to enable easy collection of hatchlings.

By putting up stalls and creating sculptures of turtles, the RSTPC has made its presence felt at Gopalpur Beach festival in recent years. The V.J. Sheth Memorial Sea Turtle Interpretation Centre has been set up by the RSTPC (courtesy the Eastern Shipping Corporation, Mumbai), which aims to increase public awareness about sea turtles and conservation programmes. Due to the efforts of the organization, the sale and consumption of sea turtle eggs in the 3 coastal villages of Purunabandha, Gokharkuda and Kantiagada have been put to an end. For the locals, the turtle is sacrosanct as an incarnation of Lord Vishnu.

Current activities of the RSTPC are undertaken in collaboration with other organisations and agencies which include the Forest Department, Orissa, Dakshin Foundation, Bangalore, Wildlife Institute of India, Greenpeace, World Turtle Trust, Wildlife Society of Orissa, People for Animals and the Wildlife Trust of India. Members of RSTPC who have been trained by wildlife experts serve as research assistants, working in collaboration with scientists such as Dr. Bivash Pandav, Dr. Basudev Tripathi, Dr. Kartik Shanker Dr. Chandrasekhar Kar and researchers such as Suresh Kumar and Divya Karnad.

The current projects of the RSTPC include data collection from the tagging of turtles, recapture studies, distribution of the mating congregation, satellite transmitter ranging studies and monitoring hatchling mortality rates. Education and awareness materials are also provided by the RSTPC to local school children and organisations in the form of CDs, journals, documentaries and pictures. The Rushikulya Sea Turtle Protection Committee boasts of a well equipped library with colourful books on wildlife in general and marine creatures in particular. 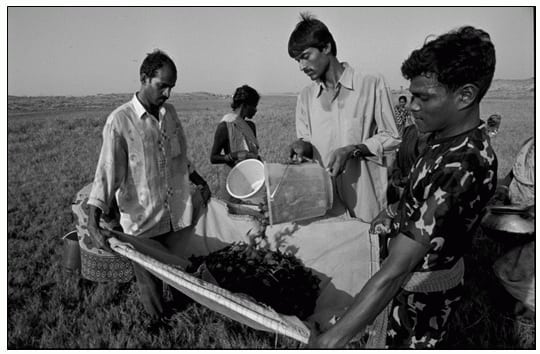 Figure 1: RSTPC volunteers collecting hatchlings from a mass hatching event. These hatchlings get misoriented by artificial lighting and move towards meadows on the landward side.

“The Ghost Net Project is for people from (Indigenous) communities all around the Gulf of Carpentaria to find ways to work together to get rid of marine debris in their sea country.”
Djawa Yunupingu, Dhimurru Land Management Aboriginal Corporation

In the decade preceding 2004, north Australian Indigenous Sea Rangers noted that an increasing number of turtles were becoming entangled in ghost nets (derelict fishing nets) where they forage for food and/or nest. This was of particular concern to them as this region is home to 6 species of marine turtle all of which are culturally & economically significant as well as of ecological importance. The project got underway in 2005 with funding from the Australian government. Its primary goals are:

In the past three years the programme has involved 18 ranger groups working along the coastline from the Torres Straits to northern Arnhem Land, a distance of thousands of kilometres. The rangers have measured, identified, catalogued & removed over 4,000 net samples ranging in size from a mere scrap to a monster net weighing over 6 tonnes. Most importantly, they have rescued hundreds of turtles. In February this year, on a 42 kilometre nesting beach near Weipa, there were 63 turtles entangled in the nets. Fortunately there were two Napranum Shire rangers, Peter and Angie, living on the beach who managed to rescue 50% of them. Half of these turtles were olive ridleys. 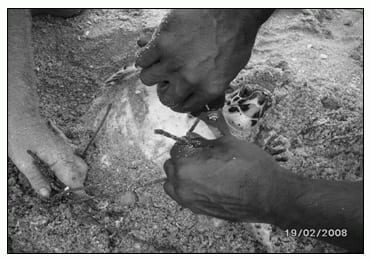