The waters of Myanmar coastal areas harbour five species of sea turtles including green turtles (Chelonia mydas). Green turtles breed regularly on Myanmar’s beaches. Since 1963, the Department of Fisheries (DoF) has taken up a project to breed and protect sea turtles on Thameehla Island (also known as Diamond Island) in Ngaputaw Township, Ayeyarwady Division, Myanmar. Thameehla Island at the mouth of Pathein River hosts green turtles. This article describes some of the results of a study from data collected between 1986 and 2007 on Thameehla Island. In the study, factors that could lead to sea turtle extinction locally were studied and current sea turtle conservation activities were examined. From September 1986 to December 2007, clutch sizes, number of eggs and the number of hatchlings released were recorded.

Sea turtles nest all year round at Thameehla Island, which is a major nesting site of green turtles in the Ayeyarwady delta. The hatching area is one mile in length and half a mile in breadth. It is situated at 15° 51.30′ North and 94° 17.30′ East (Figure 1). 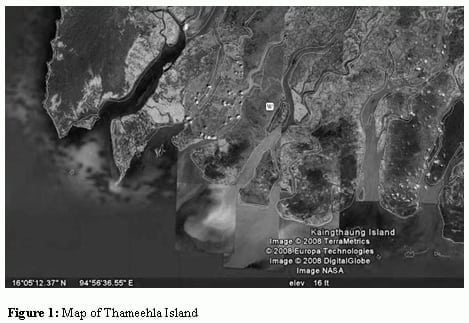 The island is protected by the Department of Fisheries all year round. The Department of Fisheries has also established hatcheries on these beaches (DoF, 2003). The green turtle (Chelonia mydas) is one of the five species of sea turtles recorded nesting in Myanmar coastal areas, including – Ayeyarwady delta area, Rakhine coastal area, Mon coastal area and Tanintharyi coastal area. The sea turtle species recorded in Myanmar are loggerhead (Caretta caretta), green (Chelonia mydas), hawksbill (Eretmochelys imbricata), olive ridley (Lepidochelys olivacea) and leatherback (Dermochelys coriacea) turtles. In the Rakhine coastal area of Myanmar, the hawksbill turtle (Eretmochelys imbricata) is the predominant nesting species (Sann Aung & Hahn, 2001), while the predominant nesting turtle species in some parts of the Tanintharyi coastal area and Ayeyarwady delta area is olive ridley turtle (Lepidochelys olivacea). Here, the first batch of nesting turtles comes up in October at night and large numbers of turtles have been recorded in December, January and February (Win Maung, 1999).

Nesting sea turtles were observed and identified according to the description of Smith (1973), Carr (1967) and Win Maung and Win Ko Ko (2002) at Thameehla Island during 1986 to 2007. Some nests were excavated and transferred for incubation to hatcheries at selected sites. Data collection on hatching success of turtles at original nest sites was also carried out. Total egg numbers, unhatched and damaged egg numbers and number of hatchlings that emerged were recorded during the study period. The data recorded were then analyzed.

The number of sea turtle nests and total eggs laid on the beaches of Thameehla Island were recorded during the period from 1986 to 2007 (Table 1). Almost all turtles recorded in Thameehla Island were green turtles (Chelonia mydas). Eggs of some turtle nests located in unfavourable environments were collected and incubated in hatcheries for later release as a conservation measure.

A total of 7,461 nests and 693,929 eggs were recorded during the study period. The highest number of turtle nests was recorded in 1989 and was followed by those of the years 1993, 1990 and 1987. The highest number of total eggs laid was noted in 1989 and the least in 1986 (Figure 2; Table 1). The number of nests recorded during the study period was different across the years indicating the fact that the population of the nesting turtles was fluctuating. 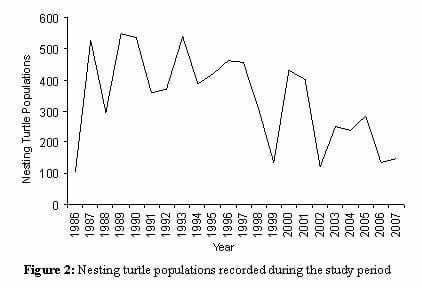 Table 1. Number of nests, eggs laid, dead hatchlings, unhatched and/or damaged eggs and number of emerged hatchlings during September 1986 and 2007. 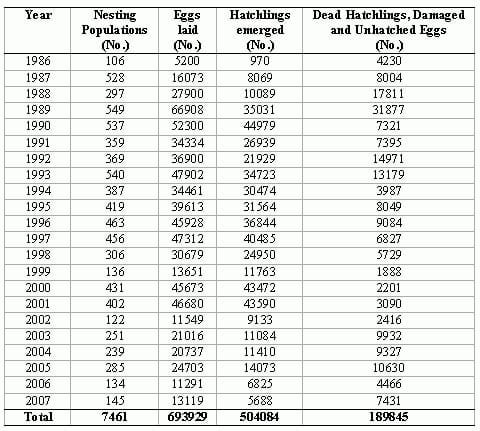 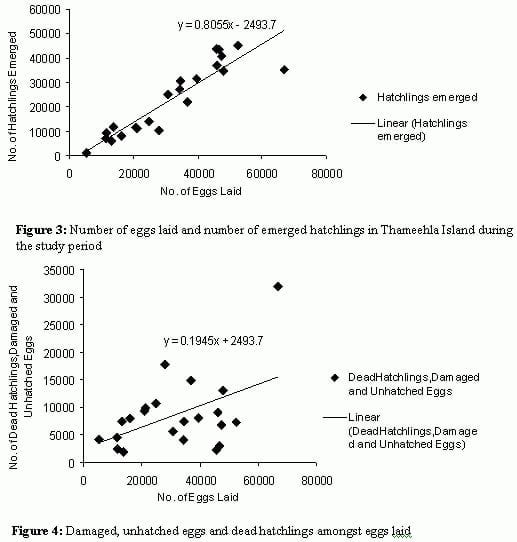 The green turtle (Chelonia mydas) is one of the five sea turtle species which occurs in the coastal waters of Myanmar. It is a predominant species in Thameehla Island. Conservation activities such as protection from human disturbance, illegal harvesting and hunting are conducted by the Ministry of Livestock and Fisheries. In addition to these activities, artificial incubation for later release of the hatchlings is done to increase the survival rate of hatchlings. After release, the hatchlings are believed to spend their life in the oceanic area, drifting passively in ocean currents before appearing in coastal feeding areas (Kitagawa et al. 2002; Hays & Marsh, 1997) and it is difficult to observe them during this period (Witham, 1980).

As successful conservation of sea turtles in Myanmar waters depends on the interest and participation of local people, particularly from the coastal areas, education and awareness is key to ensuring their participation. Education programmes have been initiated in fishing communities and among local people along Myanmar coastal areas, including on Thameehla Island. To increase turtle conservation awareness, the Ministry of Livestock and Fisheries has distributed pamphlets with the objective of raising public awareness. Education programmes have also been implemented through newspapers, magazines, radio and television. Sea turtles are protected under the Myanmar Marine Fisheries Law (1990). To strengthen effective conservation measures, the Ministry of Livestock and Fisheries prohibits capture, killing and any other form of harmful behaviour towards sea turtles. Large scale mortality is a result of incidental capture of turtles in fishing nets. Myanmar Marine Fisheries Law (1990) therefore prohibits any kind of mechanized fishing within five miles of the shore along the coast (DoF, 2003).

The author wishes to convey his special thanks to the Director General and Deputy Director General of the Department of Fisheries for due permission and constant encouragement to carry out this study. The author also wishes to express his gratitude to Dr. Win Maung, Associate Professor, Department of Zoology, Yangon University for suggesting the topic and for his untiring guidance throughout the writing of this report. Finally, the author is indebted to the staff at the Sea Turtle Conservation and Management Center under the Department of Fisheries in Ayeyarwady Division.

Carr, A. 1967. Handbook of turtles. The turtles of the United States, Canada and Baja California. Comstock Publishing, New York.

Win Maung. 1999. Preliminary Study on the Species Composition and Population Dynamic of Marine Turtles in Some Parts of Tanintharyi and Ayeyarwady Division with Respect to Wildlife Conservation.