RESCUE OF A LEATHERBACK TURTLE (DERMOCHELYS CORIACEA) AT MANAKUDI BEACH, KANNIYAKUMARI DISTRICT, TAMIL NADU, AND THE NEED FOR AN AWARENESS CAMPAIGN

The leatherback turtle (Dermochelys coriacea) is the largest marine turtle and one of the largest living reptiles in the world. Leatherbacks are also one of the most migratory of all marine turtles. They are easily distinguished by their carapace, which is leathery, not hard like in other turtles, and by their long front flippers. It has been included in the IUCN red data list as Critically Endangered and under Schedule I of the Indian Wildlife (Protection) Act, 1972.

The Bombay Natural History Society has been monitoring the migration of terns and other coastal bird species in various coastal habitats, including the saltpans of Kanniyakumari District, through its Point Calimere Bird Migration Study Centre for the last three years. On 23rd June 2009, one of us (P. Dhakshinamoorthy), during a field trip to the Puthalam saltpans, saw and photographed a large sea turtle that was tied to one of the pillars of Manakudi bridge and was further harnessed with the weight of a sandbag and a large stone.

From the photographs we identified the turtle as a leatherback based on its distinguishing features including the seven distinct ridges on the leathery carapace. We immediately informed the local District Forest Officer and the Chief Conservator of Forests (Wildlife) of the stranded turtle. The Department staff, media, press personnel and the general public thronged the site to get a glimpse of the giant reptile and the rescue operation. The sandbag and stone were removed and the turtle was dragged into the sea by eight people with the help of ropes. When it reached a floating depth of 2 feet in the surfing (tidal) zone of the sea, the turtle started to inadvertently pull the people holding the ropes into the sea. More people then joined in to hold the ropes until the turtle had crossed the surfing zone (Figure 1). Then the ropes were removed and the animal was set free. We watched in awe till it disappeared into the depths of the sea. The next day, news about the successful rescue operation of the leatherback turtle and information about its rareness and endangered status was published in many of the local daily newspapers and was also broadcast on local television channels.

During the rescue operation, enquiries with the local fishermen revealed to us that sea turtles (including leatherbacks) are regularly caught in fishing nets as bycatch and are often slaughtered. According to local fishermen, and also as reported by Krishnapillai and Kingston (2007), most of the turtles that are caught are olive ridley turtles (Lepidochelys olivacea). The leatherback turtles, locally known as ‘Panni Aamai’ (Pig Turtle) are relatively rare. The prevalence of a local name for the leatherback turtle among the fishermen however indicates its occasional occurrence/catch along this beach.

Leatherbacks are of profound conservation concern around the world after their populations crashed by more than 90 percent in the 1980s and 1990s. In India, although leatherbacks come to the beaches of Kerala and the Andaman and Nicobar Islands for nesting (Pai, 2009), their populations in the Indian seas remain generally un-assessed and unevaluated. There is also considerable concern about the impact that the December 2004 tsunami had on the two key nesting areas in Kerala and the Andaman and Nicobar Islands for the leatherback turtles that visit these shores (Hamann et al., 2006). Further, observations by local fishermen indicate that Casuarina plantations raised along the coast between Kovalam and Manakudi up to the high-tide mark after the 2004 tsunami has also resulted in sea turtles abandoning the beaches where they previously nested (Balachandran et. al., unpublished observations) 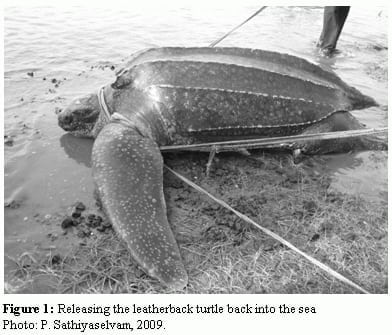 As the rescue operation of the leatherback was held in the presence of a large gathering and as it also received media coverage, we thought it a good opportunity to initiate awareness among the local community. Although all five species of sea turtles that occur in the Indian seas are included in the IUCN Red Data List and in Schedule I of the Wildlife (Protection) Act (1972), there is a lack of awareness about them among the fishing community. Hence, it is necessary to undertake awareness campaigns along the entire stretch of the coastal areas of Kanniyakumari district, especially among the local fisherfolk. The awareness campaigns should be planned in such a manner so as to get more information on the Indian Ocean sub-population through local fisherfolk as little research has been done on the status of this critically endangered marine fauna from the subcontinent.

We would like to express our sincere thanks to Dr. V. N. Singh, Chief Conservator of Forests (WL), Southern Circle, and Mr. Sundararaju, District Forest Officer, Kanniyakumari District, Tamil Nadu for providing us the services of the forest staff team led by Range Officer Mr. Chellan for the rescue of this turtle. We are also grateful to Dr. Ranjit Manakadan, Assistant Director, BNHS for going through this manuscript and providing useful inputs.