Nagapattinam district in Tamil Nadu has a coastline of 161 km. Coastal characteristics vary along this stretch. For example, the 40 km coastal stretch from Point Calimere to Voimedu is primarily swampy and there are no sandy beaches. Northwards from Point Calimere up to Kollidam, a distance of 120 km, the stretch is predominantly sandy with a few swampy patches in Thirumullaivasal and Palaiyar. Results of surveys carried out reveal that sporadic nesting of olive ridley turtles occurs in the sandy stretches along this coastline from Point Calimere in the south up to Chennai in the north during the nesting season between December and March. The Government of India through its Ministry of Environment and Forests and the Wetland and Wildlife Management Division funds various olive ridley conservation projects every year along this coast. A description of various activities carried out along the Nagapattinam coast is given below.

Every year Olive Ridley Protection Camps are established in important nesting sites during the nesting season from December to March. Two ‘protection watchers’ are stationed at each of these camps and the camps are equipped with tents, cots, torches and other accessories (Figure 1). The camps are set up for the following purposes: 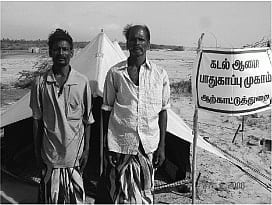 Watchers in these camps are on duty round the clock and ensure protection to turtles that visit these sites. During the 2009 nesting season, nine such protection camps were established. The locations of the camps were selected based on established records and local knowledge of fishermen. The camps were set up in the following locations (Figure 2): 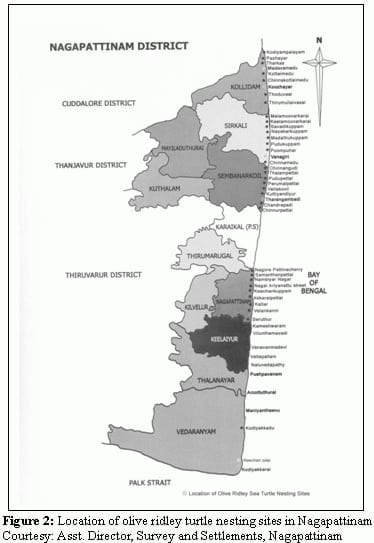 The turtle watchers perambulate the coast for a distance of 5-8 km on both sides of the protection camp and are trained to collect turtle eggs. The collected eggs are immediately translocated to a hatchery for incubation. During the 2009 nesting season, hatcheries were established in five important sites:
1. Point Calimere
2. Tharangambadi
3. Vanagiri
4. Koolaiyar
5. Madavamedu
The collected eggs are incubated for 45-52 days and after the hatchlings emerge, they are released safely back into the sea. This activity has been carried out for the last four years. The details of eggs collected and hatching success is given in the table below (Table 1). 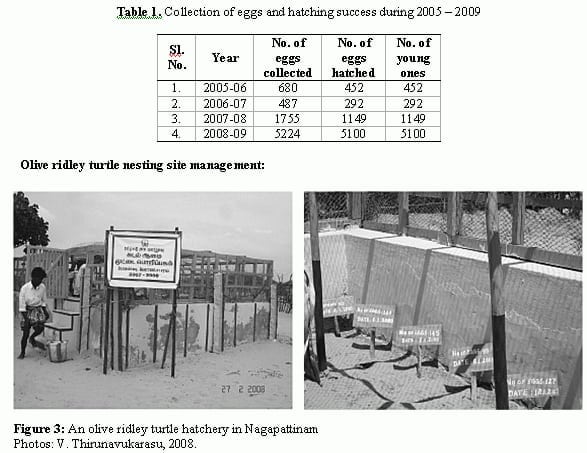 The tsunami that struck the coast in December 2004 left more than 6500 people dead along the Nagapattinam coast alone and caused enormous damage to property. Many post-tsunami assessment studies claimed that the existing coastal shelterbelt plantations and bio-shields had protected life and property in certain areas. Hence, large scale coastal afforestation activities were carried out from 2005 onwards by raising coastal shelterbelt plantations with Casuarina equisetifolia. Later however, it was found that some of the trees, having been planted near the high tide line, were hindering the movement of the olive ridley turtles that had come ashore to nest. In October 2008, three important nesting locations were identified and the grown up Casuarina equisetifolia trees were removed to facilitate turtle nesting. A minimum distance of 25 m from the high tide line was ensured for turtle nesting. The details of this activity are given below (Table 2):

Table 2. Details of removal of Casuarina equisetifolia from the three important nesting sites

The Tamil Nadu Forest Department has produced a VCD on olive ridley turtles which has been put up for sale at the Point Calimere Wildlife Sanctuary. This VCD has also been screened on many occasions to school and college students, fisherfolk and tourists, as part of the State Forest Department’s conservation awareness and education activities.