ON THE RESCUE OPERATIONS AND REHABILITATION CARRIED OUT ON THREE OLIVE RIDLEY TURTLES FROM MUMBAI, MAHARASHTRA, INDIA

Olive ridley turtles are categorized as Vulnerable on the IUCN Red List (IUCN, 2002) and are included in Schedule I of the Indian Wild Life (Protection) Act, 1972.

During the months of June – July 2008, three olive ridley turtles (Lepidochelys olivacea) were found stranded on the Mumbai coast in Maharashtra. These turtles are locally called ‘Kasav’ (Karbari et al., 1986). Details of these turtles such as morphometric measurements, type of capture, etc. are given in Table 1. There are reports of accidental stranding and inadvertent landings of marine turtles along the Maharashtra coast (e.g. Katdare & Mone, 2005), but a majority of such instances have not been properly documented. Some of the documented instances of turtles landed in Maharashtra are provided in Table 2.

The first turtle, measuring 50.5 cm in carapace length and weighing 20 kg, was found stranded at Juhu Chowpati beach on 29th June 2008 at around 9 pm (Figure 1). A passerby informed the Bombay Society for the Prevention of Cruelty to Animals (BSPCA) of the stranded turtle. The BSPCA immediately arrived at the spot and administered first aid to the turtle. They then took it to the Sakarbai Dinshaw Petit Hospital for Animals (SDPHA) situated at Parel, which is a 127 year old veterinary hospital in the heart of Mumbai city dedicated to the cause of selfless service towards the welfare of abandoned and injured animals. The right fore flipper was cut off completely and it was observed that the turtle was very weak and could barely move its body. The turtle was treated with antibiotics and food supplements at the hospital. 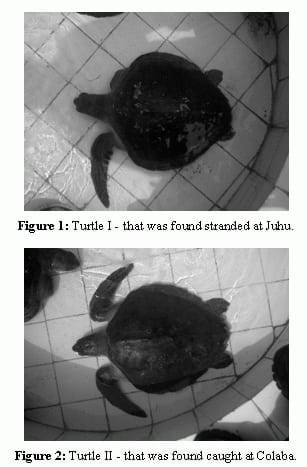 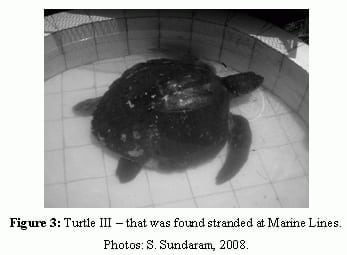 Another turtle, measuring 54 cm in carapace length and weighing 27 kg was found entangled in a fishing net by local fishermen on 2nd July 2008 at Cuffe Parade, Colaba (Figure 2). The animal was caught with a hook and line and the hook was still intact in its neck when it was found. The fishermen had carried the turtle and handed it over to the BSPCA. It was then taken to SDPHA where it was operated upon successfully and the hook was removed. After the wound healed the turtle started eating small pieces of fish. This turtle was also heavily starved for many days, as it could not eat food due to the hook in its mouth.

The third turtle was found stranded at Marine Lines on 11th July 2008 at 5 pm (Figure 3). The turtle was comparatively large, measuring 75 cm in carapace length and weighing about 49 kg. It was found by Mumbai police personnel patrolling the area. The Police Department took the animal to the BSPCA and eventually to the SDPHA. The turtle was injured very badly with both its fore flippers heavily damaged. The left fore flipper was fractured with its arteries ruptured and the flipper was dangling from the turtle’s body. The turtle was immobile. It was assumed that propellers from trawlers had caused the injury. At the hospital, both flippers were bandaged with gauze. After taking X rays, surgery was attempted on the left flipper to suture it, but was not successful. Subsequently, the flipper had to be amputated to prevent further infection.

All three turtles were administered similar treatment after they were found; they were placed in a tank filled with seawater with Poviodine solution. They were treated with Tetanmtoxide (TT), antibiotics and multivitamins. Initially, pieces of fish (of Scienid sp. and Nemiptres sp.) were given to them on a plate, but they did not eat. Later however, when they were fed manually with a pair of tongs, they began to eat. According to veterinary doctors, it would take at least one and a half months for the turtles to recover completely. They were of the opinion that the treated turtles would find it extremely difficult to fend for themselves in the wild, and suggested handing them over to the State Wildlife Department or the Taraporewala Marine Aquarium in Mumbai for rehabilitation, before being released into the sea. They were eventually given to the care of the NGO ‘Green Cross’ and were air lifted to Goa, where they will be monitored until they recover. 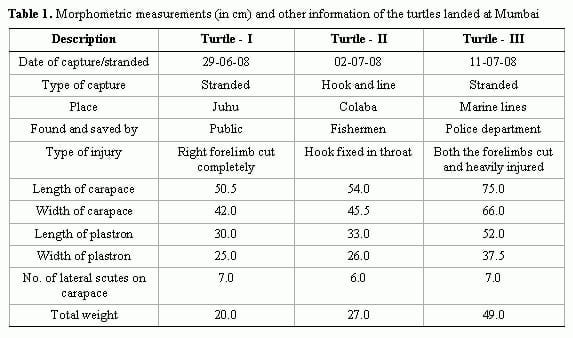 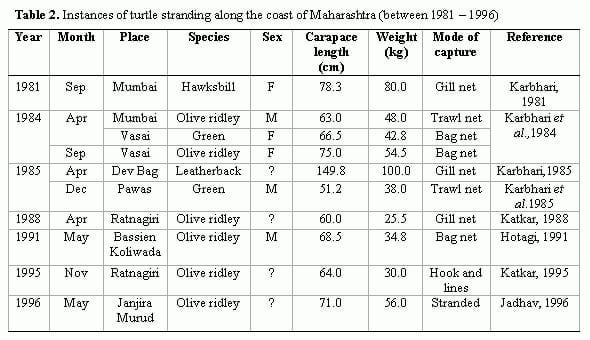 Gole, P. 1997. Conservation of biodiversity on the west coast between Mumbai and Goa. Ecological Society, Pune.