Watamu Turtle Watch (WTW) is based in Watamu, a small coastal village located about 100 km north of Mombasa. It was established in 1997 by concerned local community members, in an effort to consolidate and strengthen sea turtle conservation efforts, practiced in the area since the 1970’s. In its early years, WTW focused its conservation efforts on sea turtles in the Watamu Marine National Park and northern shores of the adjacent Mida Creek Reserve, combined with an education programme directed at fishermen and schools. The management of WTW soon realised that the survival of sea turtles in Watamu was intrinsically linked to the wellbeing of the surrounding marine environment, including the protection of sea turtles across their migratory range.

Concerned by the increasing widespread degradation of the Kenyan inshore marine environment, in 2003 the WTW broadened its efforts to encompass marine conservation issues by forming the Local Ocean Trust (LOT). WTW sits as the sea turtle flagship programme within LOT. LOT works in close co-operation with the Kenya Sea Turtle Conservation Committee (KESCOM), of which it is a lead member, the Kenya Wildlife Service (KWS) and Fisheries Department, as well as numerous other stakeholders within the community. Overall, WTW covers three main sea turtle conservation programmes that in combination, conduct nest protection and monitoring, bycatch release and a rescue centre, with community outreach and education incorporating income generating activities, education directed at schools and capacity building coming under general LOT programmes.

Since 1997, with the co-operation of the local community, WTW has managed and operated a nest protection and monitoring programme in Watamu Marine National Park and Reserve. In the Malindi Marine National Park, WTW has established a similar programme, managed by KWS, and guided and overseen by WTW. Staff patrol the nesting beaches every night of the year, to locate and tag nesting sea turtles and protect the nests. Green turtles are the predominant nesters along with occasional olive ridleys.

The Watamu programme provides valuable information on the population status of turtles in the area. For the past four years in a row, previously tagged nesting sea turtles have returned to Watamu after an absence of 3-5 years. These were the first recorded return-nesting sea turtles in Kenya, highlighting the value of this programme. For the period 1997 to 2007, 325 green sea turtle nests have been protected, making Watamu a very secure nesting area. Up to the end of July 2008, 29 green sea turtle nests have been protected. With sea turtle populations under threat in Kenya, the natural ‘release’ of over 43,000 hatchlings since 1997 highlights the conservation value of nest protection and monitoring.

This programme works in co-operation with local fishing communities, in an effort to encourage fishermen to release, rather than slaughter sea turtles accidentally caught in their fishing gears. The localities where sea turtles are caught in this manner include Mida Creek Reserve and the Watamu Marine Reserve. The sea turtles are released by WTW into the Watamu Marine National Park, which is a no-take sanctuary for all sea life. WTW pays a compensation fee of approximately $US 5 per sea turtle to the participating fishermen, to cover their public transport, telephone costs, fishing gear damage, and time and inconvenience in notifying WTW about the captured sea turtle. Biometric data are recorded and each sea turtle is tagged before release.

In the Watamu area, from August 1998 to June 2009, over 4000 sea turtles had been saved from slaughter and released by WTW under this scheme. 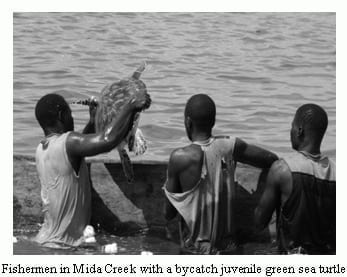 The direct conservation value of LOT activities and programmes is clear and they receive support from donor organisations like African Fund for Endangered Wildlife and the local tourism sector. Funds are also raised through sea turtle adoption schemes, and many activities are carried out by volunteers, making this a long term sustainable programme. The bycatch programme is believed to be the longest running programme of its kind worldwide. The programme has also revealed that the Mida Creek Reserve and surrounding Watamu waters are a nationally important feeding ground for juvenile green and hawksbill turtles. Each year the number of fishermen participating in the scheme around Watamu increases, as do the number of releases. By June 2009 over 200 hundred fisherman had participated. This reflects the success of LOT’s education and awareness work among the fisher communities. It can also be seen as an indication of positive change in fishers’ attitudes towards conserving sea turtles and the marine environment.

LOT has assisted with the formation of Beach Management Units (BMUs) in the Watamu area. BMUs are formed by co-operative groups of fishermen and marine stakeholders, licensed with the Kenya Fisheries Department and encouraged to use approved fishing gears and methods to manage their fishery and activities in a sustainable manner. LOT provides educational input and advice to BMUs to emphasise the value to conserve the marine environment and sea turtles.

LOT employs a field officer and a member of the local fishing community to conduct daily patrols within the marine protected areas around Watamu, collecting information on illegal and deleterious marine resource exploitation. This information is recorded in monthly reports and sent to the authorities and marine stakeholders, in an effort to promote awareness and effective law enforcement.

This is now the fifth year of rescuing/rehabilitating sick and injured sea turtles with considerable success during this period, releasing approximately 40 of 60 sea turtles that have come into our care through the WTW net release programme.

Sea turtle and marine conservation education and awareness activities have been undertaken in 21 local schools in the region and also among fisher communities. Besides providing otherwise unavailable education of this kind, LOT’s Community Education Programme also encourages and supports community based eco-tourism and alternative income generating initiatives in an effort to alleviate local poverty and pressure on the marine resources.