The islands located in the Mozambique Channel, including the French Eparses (Scattered) islands, are major nesting and feeding sites for green (Chelonia mydas) and hawksbill (Eretmochelys imbricata) turtles (Bourjea, 2005; Taquet, 2007; Bourjea et al., 2008; Bourjea & Benhamou, 2008). Green turtles are present in tropical and subtropical waters worldwide, generally in coastal areas and near islands. In the South-West Indian Ocean (SWIO) around 50% of the turtles present are estimated to be green turtles – compared to 20% on a worldwide scale (Servan, 1977). Unlike many other regions where green turtle populations are increasing thanks to efficient protection measures, the populations in the SWIO are in decline (Taquet, 2007).

Genetic studies on green turtles have revealed the existence of two meta-populations in the world, one Atlantic, the other Indo-Pacific (Bourjea, 2005; Taquet, 2007). Samples taken from adult females in the French Eparses islands of Tromelin, Glorieuses, Juan de Nova andEuropahaveshowedthatturtlesfromtheAtlantic population reproduce and nest in the South of the Mozambique Channel (Europa and Juan de Nova), whereas the Indo-Pacific turtles do so in the North (Juan de Nova, Glorieuses, Tromelin) (Bourjea, 2005; Bourjea et al., 2007a; Taquet, 2007) (Table 1). Juan de Nova is the only island where both meta-populations breed.

The French territory of the Terres australes et antarctiques françaises (Taaf) is composed of five districts: Terre Adélie, in the Antarctic continent, the sub-antarctic archipelagos of Crozet and Kerguelen as well as the Saint-Paul and Amsterdam islands, and the tropical Eparses islands (îles Eparses) composed of Tromelin, Glorieuses, Juan de Nova, Bassas da India and Europa (Figure 1). The Eparses islands have been under the authority of the minister of France’s overseas territories and departments since 1960. Their administration was first handled by the prefect of Reunion Island, until it was handed down to the prefect of the Taaf in 2005. In February 2007, these islands officially became the Taaf’s fifth district. Although French, they do not belong to the European Union.

The sovereignty over Europa, Juan de Nova and Glorieuses is entrusted to military detachments of the Forces armées de la zone sud de l’océan Indien (FAZSOI). On Tromelin, it is carried out by the chief meteorologist and for Bassas da India by the presence of the French Navy in its waters. This permanent presence plays a key role in the conservation of sea turtles, as it dissuades poachers from taking turtle eggs or killing turtles for their meat. 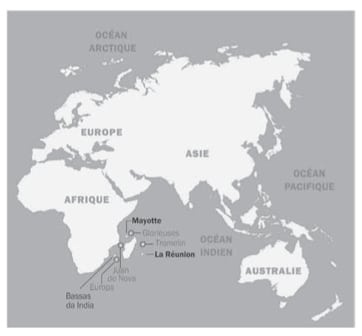 The Eparses islands are scarce remainders of practically virgin biodiversity sanctuaries. Their amazing marine diversity has earned them the name of “oceanic sanctuaries of primitive Nature”. These islands have been protected over the centuries by their isolated locations and a very limited human occupation, thus giving them an elevated scientific value. They are privileged sites for studying marine flora and fauna, including turtles, and can be used as world wide scientific references.

Geographically isolated from the rest of the Eparses islands, Tromelin is the only island not to be located in the Mozambique Channel. It is located to the east of Madagascar and the north-west of Reunion Island. This small remote island is an important site for reproduction and nesting of green turtles (Bourjea, 2005) (Figure 2). Due to its small size and preserved ecosystems, it is also a valuable area for scientific research.

The archipelago of Glorieuses, whose two main madreporic islands are Grande Glorieuse and l’île du Lys, stands sentry over the north-east of the Mozambique Channel (Figure 3). Both green and hawksbill turtles can be found in Glorieuses (Ciccione et al., 2005; Bourjea et al., 2008). Whereas the lagoon is a feeding site for both species, only green turtles nest on the island’s white beaches (Roos, 2000; Ciccione et al., 2005; Bourjea & Benhamou, 2008).

Europa, located near Bassas da India, is the most southern of the Scattered islands (Figure 6). It is home to both hawksbill and green immature turtles (Bourjea, 2005; Bourjea et al., 2006; Bourjea et al., 2007b; Bourjea et al., 2008). It is also a regional and world-wide major nesting site for green turtles belonging to the Atlantic meta-population (Hughes, 1970; Quod et Garnier, 2004). These facts make Europa a great asset to sea turtle protection.

The presence of both hawksbill turtles (critically endangered on the IUCN Red List) and Atlantic and Indo-Pacific green turtles (listed as endangered by the IUCN) give the Eparses islands a high natural value. This, and the existence of both feeding and nesting sites, confers particular conservation values to this region. Nevertheless, the Eparses islands are also subjected to certain pressures. Marine turtles are exposed to several threats, mostly anthropogenic. Pollution by oil and gas, which occurred on Juan de Nova in 2006, threatens not only immature turtles living in the lagoons but all turtles swimming in the area as well as nesting beaches.

Purse seine tuna fisheries use Fish Aggregating Devices (FADs). These cause the by-catch of immature green and hawksbill turtles, which eventually drown if they aren’t taken out of the nets fast enough. Furthermore, it takes centuries for abandoned FADs and nets to deteriorate, creating a widespread problem of ghost nets, or ghost ‘fishing’, which is thus far impossible to quantify. In addition to the impacts of legal and ghost fishing, illegal fishing also takes its toll on marine turtles. Although remote, the Eparses islands are visited by small-scale fishermen who are attracted by the abundance of reef fish. These fishermen sometimes eat turtles or their eggs.

Last but not least, climate change doubly pressures marine turtles. On the one hand, the current sea level rise is reducing the surface of available nesting beaches (Taquet, 2007; Hawkes et al., 2009). On the other hand, rising temperatures favor female production, which could lead to a strong sex bias and ultimately the extinction of these animals (Taquet, 2007; Hawkes et al., 2009).

It is very important that we preserve the opportunity and the privilege of working in natural labs such as the Eparses islands. This is the very reason why the Taaf has been supporting scientific programs in these isolated territories, especially those led by organizations such as Kélonia1 and IFREMER2 for quite some time now. These studies deal with global warming, nesting characteristics, population genetics, tagging and photo-identification of immature and nesting turtles, etc3.

Besides supporting research, the Taaf also lead concrete actions to mitigate turtle by-catch under FADs. For instance, the fishery observers placed by the Taaf on tuna purse seiners receive specific training by Kélonia and IFREMER to identify and revive entangled turtles.

Figure 6: The entrance to Europa’s mangroves, where hawksbill turtles may be found (Source: Taaf, 2009)

Scientific research contributes greatly to better knowledge of species and habitats. Furthermore it is essential to orienting management measures and ecosystem preservation. To this end, the Terres australes et antarctiques françaises and the Agence des aires marines protégées4 (AAMP) have signed an agreement to carry out an eco-regional analysis of the Eparses islands. The aim of this document is to create a strategy to establish Marine Protected Areas (MPAs) in the Eparses islands by 2011. Two complementary steps are planned: (1) a summary of all scientific data available, and (2) the realization of new research campaigns. The flexibility of the Taaf’s administration as well as its know-how in ecological management will likely amount to quick concrete results, thanks to a close co-operation with the AAMP.

Furthermore, the Taaf have made two commitments within France’s Grenelle de la Mer5. The first one is to classify the island of Europa and its territorial waters as a National Natural Reserve (NNR) by the end of 2010. This action should be complemented by the establishment of MPAs in the Eparses islands, which will be done with all relevant administrations. The Taaf’s second commitment is to become a reference for scientific research and sustainable marine activities.

Based on their experience in the southern islands and thanks to the management of the NNR of the Terres australes françaises6, the Taaf wish to reach the same type of sustainable management and preservation of the Scattered islands’ natural resources.

The author is very grateful to Stéphane Ciccione, director of Kelonia, Jérôme Bourjea, from IFREMER, and the IOTN specialists for proofreading this article.

1 Kélonia : Marine turtle observatory of la Réunion island. Not only does Kélonia lead scientific studies on turtles, but it also plays an important role in education and awareness.

4 Agence des aires marines protégées: state-owned company whose main functions are to support public policies for the creation of MPAs and to coordinate France’s MPA network.

5 Revealed on 27th February 2009, the Grenelle de la Mer is a marine policy that concerns all actions of the Government and formalizes France’s ambition concerning the oceans and all related activities. The “blue book” makes an inventory of all 138 commitments made by France on short, medium and long terms. These commitments apply to very various domains, of which marine energies, transportation, biodiversity, fisheries, pollution, governance, aquaculture, education, etc.