Sea turtles are under pressure from a number of natural and anthropogenic factors, both in the terrestrial phase of their life as well as in marine environment. Conservation efforts will only succeed if the major threats can be managed, and fisheries interactions constitute one of these. The small offshore longline fishery of the French islands of the Indian Ocean (30 offshore longliners) seems to have a limited impact on sea turtles (Bourjea et al., 2008). In 1999, a three-year study showed that less than 0.004 turtles per 1000 hooks were by-caught by this fishery (Miossec & Bourjea, 2003). Trawling and gillnets are not used in Réunion. However, in order to be able to further reduce current and future interactions between sea turtles and fisheries, it is necessary to gain as much understanding of the biology of turtle species during the pelagic stages of their lifecycle as possible.

Figure 1: Size and weight of marine turtles in by-catch from 2004 to 2008 by longliners in the waters of Réunion.

Figure 2 (a, b &c): Surgical operation, under anaesthesia, to withdraw a fishing hook from a sea turtle found in Réunion longlining bycatch. Photos: S.Ciccione, 2009

Cooperation with Fishers for Research and Best Practice

By working together, scientists and open sea fishers can work towards reducing sea turtle by-catch and mitigating its impacts. For example, fishers can remove hooks from turtle esophaguses before they release them, or keep the turtle alive on board until assumption of responsibility for them by a health center. Additionally, data collected when turtle by-catch occurs (e.g. boat position, time and date, turtle weight and length, and genetic sample) or after the release (e.g. movement and diving behavior of turtles fitted with satellite tags) can help increase understanding of the biology of sea turtles and their interaction with open sea fisheries.

To this end, in 2004 a cooperative program was established by Kelonia, IFREMER and Reunionese volunteer fishers to monitor by-catch of sea turtles in the Réunion longline fishery and to reduce by- catch mortality. By-catch turtles (Figure 1) are kept onboard by fishers, and given to the Kelonia health centre to recover after hook removal. Modern surgical techniques and anaesthesia sees more than 60% of turtles recovering (Figure 2). In September 2008, this program was included as part of the French sea turtle component of the South West Indian Ocean Fisheries Project (SWIOFP) supported by the Global Environment Facility (GEF). The issue is to study the open sea behaviour of marine turtles and the interactions with fisheries within an ecosystem approach. The program is led from Réunion and works together with volunteer Réunionese drifting longliners. Turtles are released with a location/depth recorder satellite tag, in order to study their open sea behavior.

The partnership with the fishermen is a long-term job, but the partnership is going well and has continued to involve the same four boats since 2004. 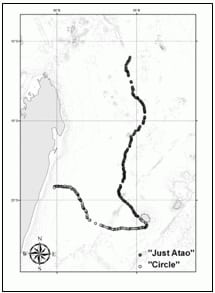 In the framework of the SWIOFP, 80 satellite tags will be deployed in the French Exclusive Economic Zone of the West Indian Ocean to have a regional vision of the oceanic displacements of the sea turtle. Results will be taken into account in fisheries management.

Acknowledgements: Thanks to the Local Initiative Fund of Credit Agricole Bank and the Regional Council of Réunion for their financial support, and to Dc Francis Schneider for his surgical expertise.