On 25 November 2009 the officers of Iran’s Kharg Department of Environment of Bushehr Province (Persian Gulf) rescued two green sea turtles (Chelonia mydas) from the Kharg Petrochemical reservoir located in the south part of Kharg Island. They released the turtles to the sea from the north part of the island (Fig.1).

Multi-lateral conservation efforts are needed within Kharg and Kharko islands to protect sea turtles, coral reefs and their habitats. We hope to speed up the development of this by enlisting support from the private sector such as oil and gas companies on Kharg Island. 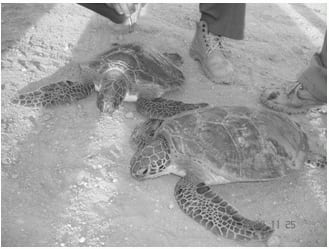 RECORDS OF LOGGERHEAD TURTLES ON THE MAKRAN COAST, PAKISTAN

The Makran Coast is not only recognized as a beautiful landscape but a rich biodiversity hotspot within Pakistan. There are fascinating marine and terrestrial wildlife on this coast including marine turtles. The coast’s local community members have a strong association with the sea for their livelihood, which is fishing dependent. They catch sh, drive boats, trade in fish and fishing associated gears, or work in sh processing industries.

Recently Mr. Dad Karim, a fisherman from Gwadar, caught a loggerhead turtle (Caretta caretta) in his net. Mr. Dad Karim, who is an experienced fisherman from Gwadar is a strong supporter of the Pakistan Wetlands Programme. He, convinced with the need for conserving marine life, safely released the turtle back to the sea after taking pictures of it. This record indicates the occurrence of a fourth marine turtle species in the waters around Gwadar. There is a need for extensive surveys of the marine turtles in this area, not only on the nesting beaches but also in the sea, to further explore their abundance and distribution. 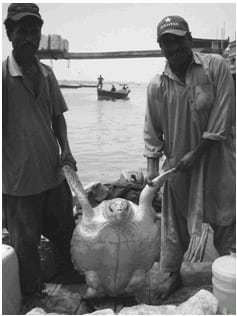 Figure 1: A rescued loggerhead turtle being released off the coast of Gwadar
Photo: Pakistan Wetlands Programme, 2008 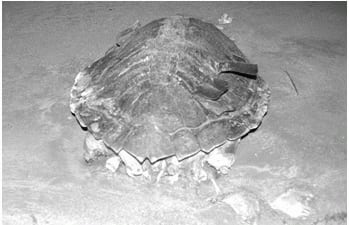 In February 2010, a couple of washed up carcasses of loggerhead turtles were recorded at West Bay in Gwadar. This provided more evidence of the occurrence of the species in the coastal belt of Makran. These rare records do not support the claim of a large nesting population of loggerhead turtles on the Makran Coast made by a non- governmental organisation in Pakistan. The organisation mentioned Dharan but the 60 nests protected there are green turtle nests protected by the Pakistan Wetlands Programme. Despite the recent incidental records of loggerheads occurring in coastal waters, there is still no rm evidence of nesting loggerhead turtles on the Makran Coast.