Many of the prime turtle nesting sites in the Andaman and Nicobar Islands were badly affected by the December 2004 earthquake and the subsequent tsunami (Andrews et al., 2006a). The coastline and the shore topography were severely altered in many of these islands, with the Nicobar group of islands undergoing submergence (Ramachandran et al., 2005), while coastal plates in some of the Andaman Islands were uplifted (Alfred et al., 2005; CORDIO/ IUCN, 2005). The impact of these drastic changes on the shape and structure of the coast and on the nesting patterns of sea turtles are poorly understood (Alfred et al., 2005; Ramachandran et al., 2005). 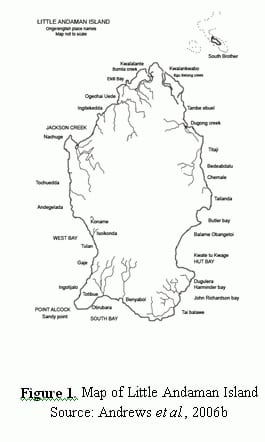 Preliminary studies have indicated that the southern and western coasts of Little Andaman (Figure 1) are key nesting sites for leatherback turtles in the Andaman group of islands (Andrews et al., 2006b). The island underwent an upheaval of 1 meter and the coastline underwent considerable changes. The beaches at South Bay and West Bay of the Little Andaman Island are major nesting sites for leatherback turtles and nesting was observed to be very poor in the subsequent years (2005-2007) (Andrews et al., 2006a). Andrews et al. (2006a) recorded only two leatherback nests on West Bay and no evidence of nesting was found on South Bay.

In 2008, the Centre for Ecological Sciences, Indian Institute of Science (IISc), Bangalore initiated a long-term tagging and monitoring programme on Little Andaman Island in collaboration with ANET and the Andaman and Nicobar Forest Department to monitor post- tsunami leatherback nesting recovery. Initially, due to logistic constraints, the South Bay beach was chosen and has been monitored for the last four years from 2008 to 2011.

Every year, a camp was established on the South Bay beach and daily monitoring of leatherback nesting was carried out roughly between the months of December and March. During the 2010-11 nesting season, a camp at West Bay on Little Andaman Island was also established to monitor nesting and initiate satellite telemetry of leatherback turtles.

Since the initiation of the long-term tagging and monitoring programme in 2007, detailed nesting records are available for each year to show that there are about 50 to 100 nests laid in South Bay and West Bay beaches on Little Andaman Island.

A total of 38 nests and 3 false crawls were observed at South Bay during the monitoring period (Table 2) and observations revealed severe nest depredation, mostly by monitor lizards and occasionally by feral dogs.

The nesting intensity of leatherbacks on the South Bay beach showed a clear peak in the rst week of January in comparison to the rest of the season, and nesting abruptly declined towards the third week of January and remained within the narrow range of 2-10 nests till end of February (Figure 2).

A total of 59 nests were observed at South Bay beach (Table 2). Monitor lizard predation was again observed to be substantial, though it was not quanti ed. A total of 8 individuals were tagged and three were recaptured within the season (Table 1).

A rapid survey of the beach of West Bay revealed a total of 70 nests/tracks, 65 of which were old (2-3 months old) and 5 were fresh (less than a week old). Except for a few, all the nests were predated by monitor lizards.

The number of leatherback nests observed at South Bay during this season was very low in comparison to the two previous years (Table 2). A total of 7 nests and 1 false crawl were observed during the four-month period. Out of the 7 nests that were laid, monitor lizards predated one nest. Two new leatherbacks were tagged (Table 1).

A rapid survey was carried out at West Bay and 38 nests were encountered (again substantially less than in previous years).

A total of 58 nests were observed (Table 2). 6 new leatherback turtles were tagged out of which 2 tags were recaptured within the season (Table 1). Nest depredation rates by monitor lizards and feral dogs were again high.

Monitor lizards predated 55 of the 91 nests (more than 50%) observed. The nesting intensity of leatherbacks was evenly spread out from the last week of November to the rst week of January (Figure 2). 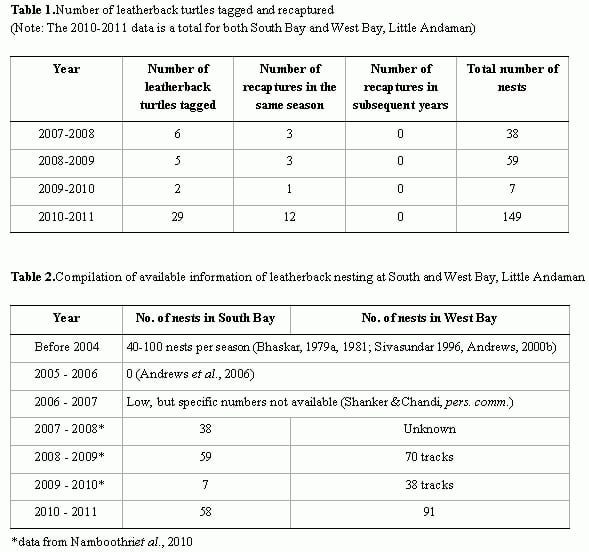 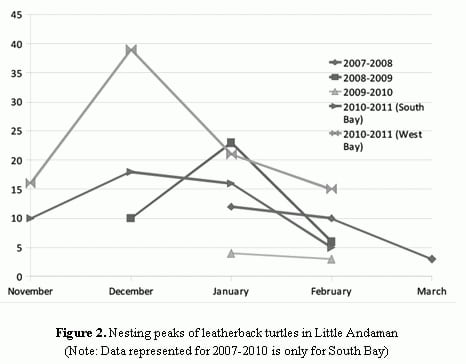 Leatherback nesting trends reveal lower nesting levels during the rst two years following the 2004 tsunami (Table 2). However, nesting seems to have recovered at both West Bay and South Bay as indicated by the gures (Table 2). However, in the absence of baselines for comparison, it is dif cult to determine if the nesting intensities have returned to pre-tsunami levels.

A drastic fall in nesting intensities at both West Bay and South Bay was noticed during the 2009-2010 season. However, such uctuations are considered normal for leatherbacks (Pritchard, 1996). Only long-term data on nesting can con rm trends. Nesting seems to commence approximately around the second or third week of November. Data from the four years of monitoring suggest an increase in nesting intensities from the end of December to early January and a substantial reduction by the second or third week of February (Figure 2). Our ndings are restricted to the post-tsunami recovery of leatherback populations at the important nesting sites of the Andaman group of islands. However, the larger and more signi cant nesting sites lie in the Nicobar group of islands and there is still a substantial gap in our understanding of recovery at these sites.

Andrews, H.V. 2000a. Current marine turtle situation in the Andaman and Nicobar Islands – An urgent need for conservation action. Kachhapa 3:19–23.