OBSERVATIONS ON THE EXPLOITATION OF SEA TURTLES ALONG THE TUTICORIN COAST, TAMIL NADU, INDIA

Sea turtles have been used for local consumption since time immemorial providing food (oil and protein) as well as other commodities (bone, leather and shell) to coastal people around the world. Their shells are widely used for the production of various curios. There are four species of sea turtles found in the Gulf of Mannar (Kar & Bhaskar, 1982): green (Chelonia mydas, local name: Paer aamai), olive ridley (Lepidochelys olivacea, local name: Yeth aamai), leatherback (Dermochelys coriacea, local name: Ezhuvari aamai) and hawksbill (Eretmochelys imbricata, local name: Kilimooku aamai). Turtle fishing was practised in this region for ages and chelonians were exported to Sri Lanka and other countries until a couple of decades ago (Agastheesapillai & Thiagarajan, 1979; Frazier, 1980). The Indian Wildlife Protection Act (1972) lists all species of marine turtles in Schedule I, thereby giving them the highest degree of protection.

Data on exploitation of turtles were collected by regular observations of turtle carapaces found near ditches, unused buildings and inside thickets that bordered the coastline. Monthly observations in the above areas were made carefully to determine the extent of mortality of turtles. Turtles usually get caught in ray nets, locally known as thirukka valai (Bhupathy & Karunakaran, 2003), which are similar to the pachuvalai gillnets described by Kuriyan (1950). In the study area, gillnets were mostly used for fishing. Gillnets are set in shallow waters and left for about 8 – 10 hours. Turtles that are entangled in the nets commonly die, either due to asphyxiation, or the fishermen chop off the flippers and/or club the head of live entangled turtles, to remove them from the net (Bhupathy et al., 2006).

During monthly patrols, each encountered carapace was assigned to a species using key characters such as the number and pattern of scutes and their colouration; they were measured to the nearest cm for curved carapace length (CCL) and curved carapace width (CCW) using a flexible tape. The location of the carapace was noted. Then it was photographed and tagged with paint. Those carcasses found in ditches were also visually counted and identified and data noted on the location where it was found. Additional information about the incidental capture of turtles was obtained through informal discussions with fishermen and other members of the local community. 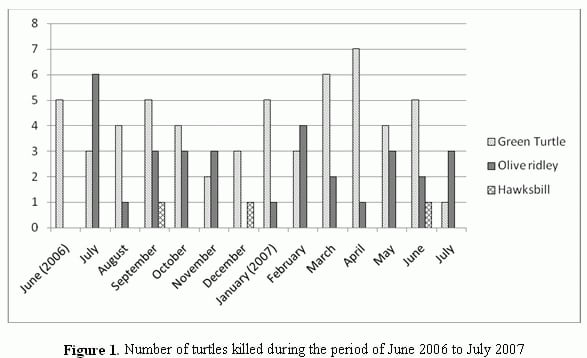 Green turtles were captured every month, with a peak in March and April (Figure 1). Olive ridley turtles were also captured nearly every month, with a peak in August. As reported by local fishermen, olive ridleys substituted for the unavailability of greens. The abattoir of turtles was opened mostly on Sundays. Turtle meat price ranged from Rs. 120 – 150 for green turtles and Rs. 100 – 120 for olive ridleys. Hawksbills were not consumed because the local people were fearful of being poisoned by the meat (Das, 1995). During this study, out of three hawksbill turtles, two were hit by propellers and one was caught in a net. But in the case of greens and olive ridleys, all of them were caught in fishing nets. Some people in the area reported that turtle meat and blood cured diseases such as piles and tuberculosis.

This study reveals the pattern of current exploitation of sea turtles along the Tuticorin coast. Most of the fishermen confirmed that those turtles that were entangled in nets and were still alive were taken for consumption. Sea turtle populations in this area have been reported to have declined due to their over-exploitation for trade and from accidental drowning in fishing gear such as gillnets and trawlers (Bhupathy & Saravanan, 2002). This study therefore recommends that government officials should periodically check whether fishermen use TEDs (Turtle Excluder Devices) in their fishing nets.

Moreover, the state fisheries department and forest department must ensure strict enforcement of the law in this regard. Unless this is done, it will not be possible to stop the exploitation of turtles in the Gulf of Mannar.

The author is very grateful to Dr. S. Bhupathy, Scientist, SACON, Anakatti for his encouragement and help throughout the study. Thanks are also due to Mr. Rameshwaran for his assistance in the study area.

Bhupathy, S. & S. Saravanan. 2002. A report on the status of sea turtles on the Tamil Nadu coast. In: Proceedings of the National Workshop for the Development of a National Sea Turtle Conservation Action Plan. Pp. 70–73.