Orissa on the east coast of India is fast becoming ground zero in India’s battle for a sustainable and just way of life. Faced with issues of displacement, malnutrition and environmental degradation, the state has experienced a spurt in the number of organisations working on environmental as social issues. Green Life Rural Association (GLRA) is different from most of these organisations in that it relies on funds generated at the grass root level, and still relies mostly on the voluntary efforts of its members.

GLRA was formed in 1993 by a group of thirteen committed village youth who were then working on the Wildlife Institute of India’s sea turtle project. Members of GLRA also worked with Operation Kachhapa when it was launched, at the time as a joint operation with the Orissa Forest Department and Wildlife Protection Society of India.

GLRA’s activities are focused in the Devi river mouth region. The mass nesting of the olive ridleys was first discovered in the Devi region in 1981. However, little attention has been paid to this area, with the mass nesting beaches of Gahirmatha to the north and Rushikulya to the south hogging most of the limelight. Devi suffered from the lack of attention paid to it. By 1993, much of the nesting space at this rookery had been lost to Casuarina plantations, ironically planted by the forest department, which is supposed to protect the interest of wildlife species such as the sea turtle.

Although significant turtle congregations have been observed in the area, mass nesting at this beach is infrequent, possibly a result of the heavy illegal trawling that takes place in the area. However, the area remains significant on account of the sporadic nesting that takes place every year, though a majority of such nests are subject to predation. With the right amount of protection, it is hoped that the turtles will once again to return to Devi en masse.

Every November, members of GLRA commence a seven month long rigorous schedule of monitoring of the nesting beaches from Devi to Chilika mouth of Puri District and Devi to Paradip of Jagatsinghpur District. Walks are conducted on a daily basis from Devi to Kadua and on a weekly basis from Kadua to Chandabhaga. Twice a month, walks are also conducted from Devi to Paradip and once in month from Chandrabhaga to Chilika mouth. An accurate count of dead turtles washed ashore is maintained, with care taken to avoid duplicate counting.

The sex of dead turtles is also recorded based on physical characteristics and sexual organs, where distinguishable. GLRA members have received threats of physical violence from some members of the trawling community, who do not wish to adhere to the no- fishing regulations in place from November onwards. This however has not deterred these individuals.

In 2002, GLRA started a project called “The Turtle Friends”, identifying strategic sites for sea turtle nesting along the coastline to focus monitoring and protection in these areas. During the nesting season, records of nesting are also maintained. The main strategy adopted by the organisation was to create awareness among, and mobilise the support of, Devi’s considerable traditional fishing community to protect the olive ridley turtles. GLRA also helps in educating children in the traditional fishing villages. It has also set up self- help groups to generate funds for needy villagers and members of groups interested in taking up part time work. Among its associated activities, GLRA has also helped educate the villagers on the hygienic preparation of dry sh for sale.

GLRA has prepared a comprehensive action plan to protect turtles along the coastline and has also constituted monitoring groups that will help ensure effective implementation of the work. Education and awareness programmes have been instituted in coastal villages by GLRA aimed at involving and mobilising the local fisher folk. As a result of GLRA’s efforts, residents of several nearby villages (Gundalaba, Sudhikeswar, Sahana, Ainsinian, Dealuakani and Chandrabhaga) have joined the organisation as full time supporting members.

A key aspect of GLRA’s turtle conservation work is the awareness programme it has launched in the coastal villages of Puri District, using a group of seven musicians and singers. Through creatively designed songs and dances held before village audiences, the group throws light on the basics of turtle biology, the importance of the species in the ecosystem and the recommendations of the Central Empowered Committee of the Supreme Court, which has recognised the important role to be played by the traditional fishing communities of Orissa in turtle protection. This is perhaps one of the few examples in the country where small village level groups are explaining the orders of the highest court in the land to those most affected, at the grass roots level. In the near future, the group plans to include the villages of Jagatsinghpur District in this programme as well.

In the year 2007-08, GLRA started a programme to control the stray dog population in the Devi mass nesting area with the help of Blue Cross of Hyderabad and Department of Animal Husbandry, Government of Orissa. Also, as part of our green campaign in the same year, GLRA distributed 500 fruit tree saplings (mango, coconut and lemon) among 1,000 fisherman families on the Devi coast as an alternative source of livelihood of the fishing community.

In the year 2009-10 GLRA built an artificial reef with the help of the local fisher community and funding support from the Orissa Marine Resources Conservation Consortium (OMRCC) to create sh reserves in some parts of the mass congregation area in Devi. This artificial reef (made of concrete blocks) will stop net fishing in the area and may provide shelter for sh and marine life. Fisherman can catch sh in this area by hook and line and this also opens up a potential avenue for ecotourism through angling.

GLRA has also started a new programme with the help of FSL-India to bring volunteers to work in Devi on the Turtle Friends project.

GLRA is an example of how a small, grass roots level organisation with limited funding and manpower can still make a difference to the planet we live on. 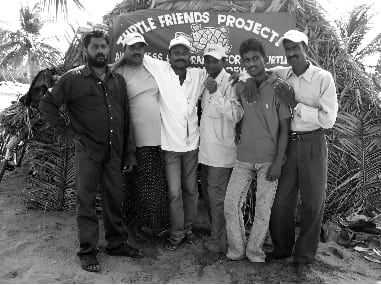 Any individuals or organisations who are interested in working with GLRA to help protect the endangered sea turtles are welcome. To find out more about GLRA and how you can help them in their mission, contact: