AN UPDATE ON OLIVE RIDLEY NESTING ALONG THE WEST COAST OF MAHARASHTRA, INDIA IN 2011–2012

Sahyadri Nisarga Mitra is an environmental NGO that was established in 1992. Its mission statement is best described as nature conservation through field protection, awareness, education and scientific-based action. The NGO functions in the Western Ghats, a global biodiversity hotspot, and thus, a critical habitat supporting a rich variety of endemic and endangered species. Its work also spans the Konkan, a thin coastal strip that is bordered by the Western Ghats on the east and the Arabian Sea towards the west.

Through the marine turtle conservation programme, until 2011, the organisation has successfully protected 688 nests and ensured the safe release of more than 29,200 hatchlings into the sea. The ex-situ conservation technique of hatchery management provides employment to local villagers. Hatchery managers patrol the beach daily to look for marine turtle nests, relocate these nests into the hatchery and release the hatchlings into the sea on their emergence. The project began in 2002 in the village of Velas and since then has been implemented across the entire 720 km coastline of the state of Maharashtra.

The statistics of nests protected and total hatchlings released per year are shown in Table 1.

From 2007 to 2009, Sahyadri Nisarga Mitra implemented the Small Grants Program under the Global Environment Facility of the UNDP and the Centre for Environmental Education (CEE India). Through this project, community members from the project villages were encouraged to participate in turtle conservation activities. Improved awareness levels and benefits from initiatives like the Turtle Festival led to many locals choosing to associate themselves with marine turtles and their conservation. 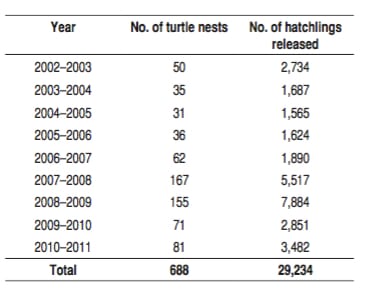 In 2011, Sahyadri Nisarga Mitra, in joint collaboration with the state forest department, began implementation of the marine turtle conservation programme for the period 2011ñ2012 in 20 villages along the coast. From March 1, 2012, this ëSave Turtleí project is supported by the Maharashtra state environment departmentís Green Ideas Program. The programme includes five villages from Raigad district, namely, Velas-Agar, Diveagar, Srivardhan, Maral, and Harihareshwar. During the 2010ñ2011 nesting season, turtle conservation was carried out in seven villages in Ratnagiri district. This year, volunteers have been identified and trained for hatchery management at seven additional villages. Hatcheries have also been built at Velas, Kelshi, Padle, Anjarla, Murud, Karde, Kolthare, Dabhol, Hedvi, Velneshwar, Guhagar, Tavsal, Narwan, Ambolgad, and Vetyein villages.

As of March 7, 2012, 50 nests have been safely relocated by Sahyadri Nisarga Mitraís volunteers to hatcheries on respective beaches (see Tables 2 and 3). 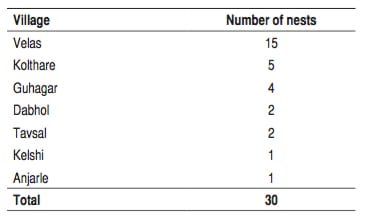 Since November 2011, three groups of international volunteers from the Raleigh Expedition-India have visited Sahyadri Nisarga Mitraís marine turtle conservation project in the village of Velas. The volunteers constructed a hatchery on the beach. They were trained by SNM in nest relocation, following which they patrolled the beach every night to look for nesting turtles. They also contributed to the development of the village by levelling the road leading up to the hatchery, constructing steps from the bridge leading down to the path to the hatchery, and constructing gates to prevent cattle from straying onto the path.

Eco-tourism through the Turtle Festival

Velas has the highest number of marine turtles nesting along Maharashtra’s coast. Hence, to involve the local community in turtle conservation, a Turtle Festival was initiated in the village in 2007, and has been held every year since during the nesting season. During this festival, tourists flock to the beach to watch hatchlings emerge from the hatchery nests and crawl towards the sea. The villagers at Velas provide home-stay arrangements for the visitors. Sahyadri Nisarga Mitra, in addition to a few villagers who wanted to work for conservation, established the Kasav Mitra Mandal. The members of the Kasav Mitra Mandal set aside 10% of their total income during the festival towards the cause of marine turtle conservation in Velas. Such a conservation initiative benefits both the local community and the marine turtles, thus ensuring the sustainability of the project in the village.

The Turtle Festival this year began on February 19, 2012. It is expected to continue as long as hatchlings emerge from the hatchery nests. Since then, approximately 450 tourists have visited this remote village located on the northernmost tip of Ratnagiri district to watch turtle hatchlings make their way towards the sea. During the festival, SNM ensures that no hatchling is harassed by restricting the handling of hatchlings to only its volunteers. The local Gram Panchayat has taken an initiative and become a participant in the Kasav Mitra Mandal. Providing economic incentives to the local community has ensured the success of this project. We now aim to replicate this model in other villages that have had a considerable amount of nesting this season.

Sahyadri Nisarga Mitra is grateful to the Maharashtra State Governmentís Forest Department and Environment Department, which have consistently supported the project since its inception in 2002. The organisation would also like to acknowledge the Gram Panchayats of all project villages, the Kasav Mitra Mandal, local volunteers and its donors and supporters, without whom establishing a successful conservation model in the state would not have been possible.