Introduction and Objectives of the Study

It is believed that only one out of 1,000 hatchlings that emerge from a nest and reach the sea survives to reach adulthood. With such a high mortality rate, it becomes critical to save every nesting adult turtle. Adult sea turtles falling prey to trawl/mechanised boats has been an issue to address for a long time, and is a sensitive issue which needs to consider fishermen’s livelihood and the conservation of sea turtles.

Measures for the safe release of endangered olive ridley sea turtles entangled in fishing nets along the Chennai coast was proposed by TREE Foundation, jointly with the Wildlife Wing of the Forest Department, Department of Fisheries, Indian Coast Guard and The Chennai Mechanized Boat Fishermen Welfare Association in March 2011.

Through a series of meetings between the stakeholders, the ìSea Turtle Fact Stickersî outlining proper rescue and release methodology were designed in November 2011.

During a meeting on December 27, 2011, Mr. Rakesh Vasisht, IFS, Chief Wildlife Warden of Tamil Nadu, addressed fishermen and stressed the need for jointly working towards better conservation measures. After the meeting, the Trawlboat Fishermen Association leaders, in consultation with some of the Association members, fixed the date for the sticker release programme. They felt that January 14 would be the best date as January 15-18 are holidays during which time the entire state celebrates the harvest festival, and all trawl boat owners and workers usually return their boats to the harbour, clean the boats and visit their homes for the four days. They felt that we would be able to affix the stickers on the maximum number of boats during this period.

In a first of its kind initiative in Indian wildlife and fisheries history, a joint effort by the TREE Foundation, Wildlife Wing of the Forest Department, Fisheries Department, Chennai Trawl Mechanized Boat Fishermen Welfare Association, and the Indian Coast Guard to affix stickers showing methods to safely release entangled sea turtles from trawl fishing nets was held at Kasimedu fishing harbour on January 14, 2012 at 5 pm in the evening. During the olive ridley nesting period in the months of January to April, more than 100 dead turtles were recorded washed ashore, and some turtles stranded with their flippers amputated. This initiative should reduce similar mortality in the future.

Easy to read “Sea Turtle Fact Stickers” outlining proper rescue methodology, designed by TREE Foundation, were distributed and strategically stuck on each boat. The trawl fishers association gave full support for this initiative, as they agreed that a healthy sea turtle population is vital for a healthy marine ecosystem. Dr. David Raj, Head Quarters – Forest Range Officer, who represented the Tamil Nadu Forest Department, requested that the fishing community bring to action the rule of law in protecting marine life. Speaking on the occasion, the Assistant Director of Fisheries Mr. Sekhar stressed on responsible fishing practices with equal care for the marine ecosystem. The trawl fishersí association president, Mr. M.E. Raghupathy, recalled ancestral fishing practices when all marine life was protected as a mark of respect to the ocean.

At the launch of Sea Turtle Release Stickers, the unanimous support of the fishers’  association was sought to protect more turtles and reduce fisheries related mortality in the current nesting season. The result of the joint coordination between all stakeholders was that Chennai has been a success story in sea turtle conservation. 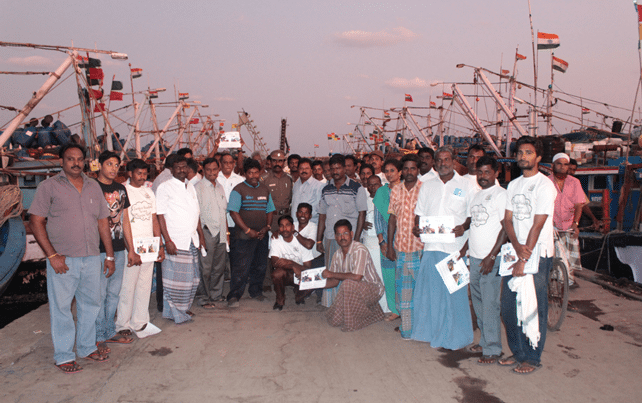 On the bridge with TREE Foundation members and fishers
Photo credit: Arun Krishnamurthy 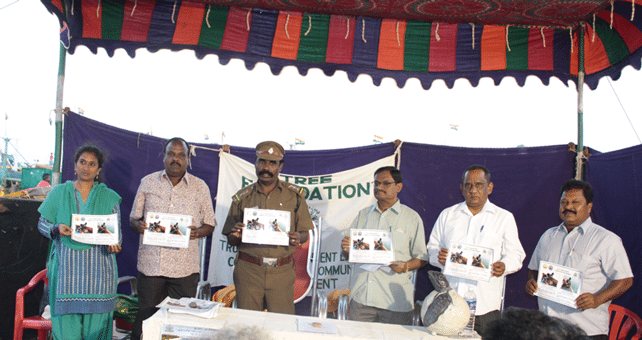 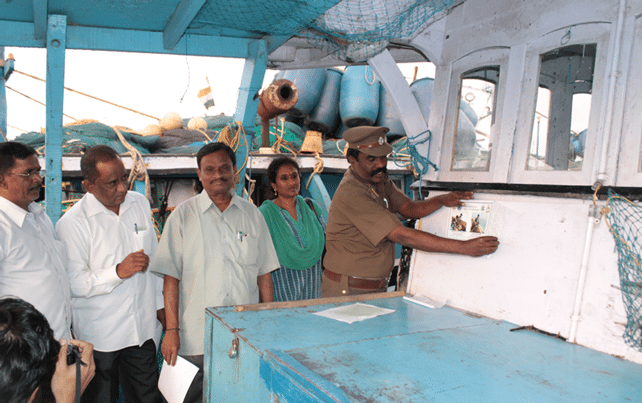 Highlights of the Event

Close to 100 fishermen attended the meeting, and more than 2,000 trawl fishermen received the turtle facts leaflets between 14 and 18 January at the harbour.

It is important to educate every trawl boat owner and worker on the ecological role of sea turtles and the methods involved in safely releasing them. The support for the stickers from Duke University and Disney Worldwide Conservation Fund came at a very crucial time, and has made the project a success. Extending the outreach programme to protect sea turtles at sea will reduce bycatch of sea turtles. It was gratifying to see the change in attitude among the trawl fishers as they requested stickers.

TREE Foundation has elicited the services of CIFNET (Central Institute of Fisheries Nautical and Engineering Training) to design a TED for local use, taking into account weather and marine conditions, mesh and grid size, and other specifications. During meetings with trawl fishers, TREE Foundation proposed to the Trawl Fishers Association to fix a suitable date to introduce the TED, explain the need for its use, and demonstrate the technique of using TEDs.

I thank the Duke University, Oak Foundation and Disney Worldwide Conservation Fund for their support, without which this endeavour would not have been possible.