TREE Foundation was founded in 2002 with the aim of protecting marine turtle populations, and understanding the inter-relationships between coastal communities and the marine resources upon which the former rely. To focus on initiatives that combine conserving species and habitat with empowering local people is the only solution, incorporating the human element from a variety of perspectives including education programmes, capacity building, economic development/poverty alleviation, human and animal health programmes, and networking with various government departments/agencies.

As part of TREE Foundation’s community based sea turtle conservation programme – jointly run with the Tamil Nadu Forest Departmentís Wildlife Wing and the Department of Fisheries, the Kadal Aamai Paadukavalargal (KAP) members patrol the beaches from Periya Neelangarai to Marakanam. TREE Foundation has been able to extend and strengthen its community based sea turtle conservation programme up to Villupuram, 8 km beyond Marakanam, covering 35 fishing villages along 110 km.

Sea turtles that nest along the Indian coast face several hardships and challenges during their lifetime. Lack of awareness and relaxed regulations have led to several problems, including custom designed fishing gear, which are threats to turtles and other marine species. In 2010, as a result of all these fishing practices and actions, turtles named Karuna, Hope, Sagari, Abdhi, Olivia, Adhira and Sagarika (olive ridley turtles), Greenie (green turtle) and Sukruti (hawksbill turtle), were recovered and brought to the rescue and rehabilitation centre. All these turtles have missing flippers, intentionally or accidentally amputated when the turtles were entangled in fishing gear. Unable to swim and feed, they became stranded on the coast. When possible, injured turtles are rescued and rehabilitated at rescue centres such as TREE Foundation’s Rescue and Rehabilitation Centre, jointly run with the Wildlife Wing of the Forest Department (Chennai, Tamil Nadu).

With limited resources, TREE Foundation functions as the caretaker for turtles in its turtle rescue and rehabilitation centre. Lack of adequate facilities and resources has pushed TREE Foundation into a challenging role of conserving and creating awareness about sea turtles and their plight along the coastal districts of Chennai – Kancheepuram in Tamil Nadu, and Nellore – Sulurpetta districts in Andhra Pradesh.

However, TREE Foundation proposes to upgrade its Turtle Rescue and Rehabilitation Centre. TREE Foundation’s expenditures are focused towards food and medical expenses. College students from the zoology department intern regularly and help in cleaning tanks and feeding the turtles on a daily basis. The Sewa Turtle Protection Force (STPF) members physically fetch seawater in cans to fill the tanks on a daily basis. STPF members also bring in the food provided to turtles whenever there is fresh catch of fish, squid and crabs. We would like to upgrade the centre with a freezer to preserve fish, and aerators with a water treatment system for the seawater in which the turtles live.

Why Didn’t We Euthanise the Turtles?

The quality of life of the turtle is also questioned repeatedly. We acknowledge that the turtle habitat is reduced to a five-foot tank. However, thousands of people, including trawl fishers, artisanal fishers, Forest and Fisheries Department officials, and students, have been inspired after seeing Karuna, Abdhi, Sagarika, Sukruti, Hope and Greenie. These turtles send a strong message-when they are alive and in the rehabilitation centre-about uncontrolled fisheries and the irresponsible utilisation of harmful fishing gear. They are also inspiring representatives for turtles in the ocean.

TREE Foundation has so far released four rehabilitated turtles, named Hope, Greenie, Olivia and Sukruti, in the presence of more than 2,000 students, fisher folk and members of the general public. Sagarika will be released in April 2012 after she has fully recovered. However, Abdhi and Karuna will need to stay in the rehabilitation centre for a longer period. 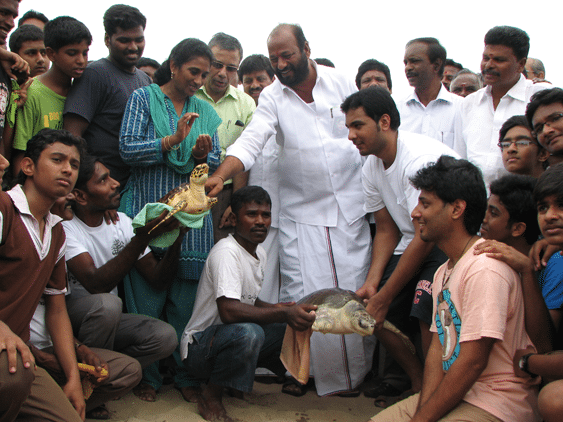