Established in 2009, the Turtle Action Group (TAG) is a network of turtle experts, enthusiasts and organisations dedicated to the conservation of sea turtles and their habitats in India, including the mainland and islands of Andaman & Nicobar and Lakshadweep (visit https://www.seaturtlesofindia.org/tag). Organisational members of TAG include community based organisations, environmental groups and non-governmental organisations (NGOs). TAG now consists of over twenty five NGOs from around India. Promoting effective conservation of sea turtles and their habitats through collective and collaborative action is the main objective of TAG.

The members of TAG meet once every year at the Annual TAG Meeting where they present outcomes of their efforts over the year and share their experiences. After the initiation workshop in January 2009 in Chennai, the second workshop was held in Bhubaneswar, Orissa in February 2010, and the third at Kumta, Karnataka in November 2010.

TAG held its 4th Annual Meeting in Mamallapuram, Tamil Nadu from 12-14 November, 2011. The meeting was hosted by the Madras Crocodile Bank Trust, a member of TAG. The main aim of this workshop was to encourage the active participation of forest department personnel and provide capacity building through various sessions held by experts over a span of three days. The workshop focused on training for outreach programmes and the collection and management of standardised data. The workshop was held back to back with a marine mammal stranding workshop organised by National Oceanic and Atmospheric Administration (NOAA), USA and Madras Veterinary College, so that TAG members could attend both training programmes.

The workshop was conducted at Hotel Tamil Nadu, situated in Mamallapuram, midway between Chennai and Pondicherry. Over 70 participants, including Forest Department officials, herpetologists, non-profit groups, community-based conservation groups and TAG members from all over India took part in this workshop. The presentations and discussions were conducted in English and translated into Hindi and where required, into other languages.

The programme started with an inauguration and introduction to TAG and its activities over the past year by Naveen Namboothri. During the first half of the day, forest department officials from various states presented their field experiences with conservation related issues. Sudhakar Kar from Odisha, C.R. Mallick, Divisional Forest Officer (Northern Andaman Islands) and R.D. Khamboj, Chief Conservator, Marine National Park, Jamnagar elaborated upon conservation efforts in their regions. Syed Ali, Lakshadweep Forest Department and Devraj, Pondicherry Forest Department also provided information about sea turtle nesting in their respective regions.
The post-lunch session was included an interactive workshop on conservation awareness through puppetry by R. Bhanumati from Pavai Centre for Puppetry, Chennai. She started by pointing out that puppetry has long been used for education and awareness. The session began with an introduction to the world of puppets, various puppetry forms in practice till date and a demonstration of how puppets can be a strong medium for the creation of awareness. She mentioned that nine Indian states use this art form to narrate folklore. Bhanumati encouraged the participants to develop a puppet character and build a story around it. She elaborated upon the skills required to convey relevant messages to the audience through the puppet show. She also pointed out that puppetry inculcates team spirit, as was evident amongst the participating teams at the workshop. The participants were divided into five small groups of five members each and were told to devise a story based on turtles and to narrate it to rest of the audience. They were given art paper and other stationery to make their own puppets. The participants were enthusiastic about the exercise and actively interacted with each other. About 30 puppets were made by 5 groups and were used to present stories relating to turtle lifecycles, impacts of climate change on nesting turtles, threats of trawlers to sea turtle populations, and threats of predators (dogs and raptors) to hatchlings. 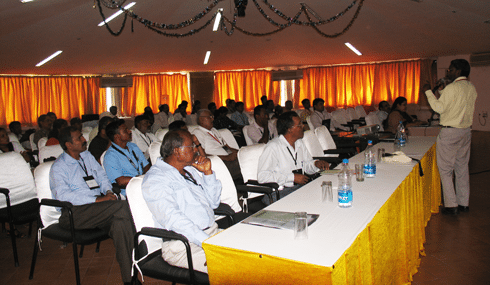 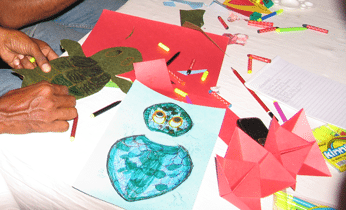 Under Bhanumati’s guidance, the audience participated with enthusiasm, Forest Department officials, TAG members and children alike. The stories that were narrated through the puppetry exercise brought out the message of conservation. During the post-presentation discussion, one of the participants pointed out that puppetry has an additional impact because of its inherent humour. Many participants agreed that puppetry was an innovative thought provoking folk-art, and could influence the audience into initiating action. Some TAG members were motivated and have decided to use puppetry in creating awareness about sea turtle conservation in their areas, especially in schools and colleges.

Hari Sridhar and Kartik Shanker conducted the first session of the day on applying for grants for new projects and to sustain ongoing projects. Hari made the important point that good writing is essential for a good proposal, and that conveying clear, concise and complete ideas is critical when applying for a grant. He emphasised applying to the appropriate funding agency, following instructions while preparing the proposal, and submission deadlines. Hari also elaborated upon the ëten pointsí one should always keep in mind to get a grant (https://www.conservationgrants.com/write.htm). 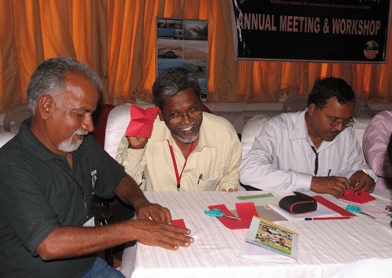 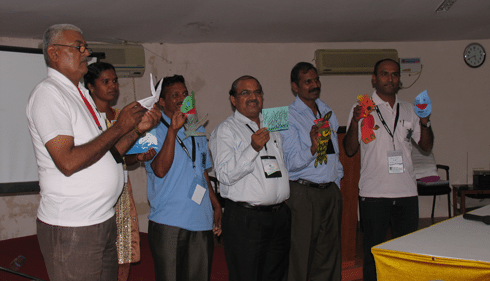 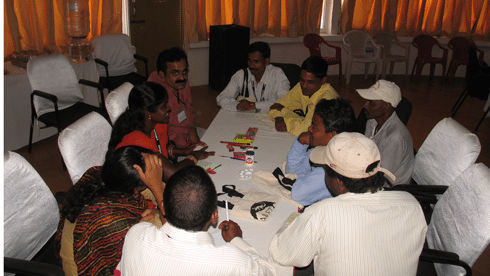 A group at work during the ‘story building session’
Photo credit: M. Muralidharan

The post lunch session on capacity building was also interactive and was conducted by filmmakers Rita Banerji and Maya Khosla of Dusty Foot Productions. Rita began the session with a question: Can a film make a difference? As Rita addressed the participants, Maya documented the activity. Rita screened some of her earlier documentaries that address conservation and livelihood issues. Video clips from her documentaries – Right to survive, Shores of silence, Voices from the forest and The wild meat trail – were shown and participants were encouraged to discuss them. Rita talked about the efforts and challenges involved in making a small documentary, even of just a few minutes. The 25 minute long Shores of silence took Rita and her crew four years to complete. While discussing her documentary on sea turtle conservation and fisheries livelihood issues, Right to survive, she said that short films and documentaries are a strong tool for awareness, and can play an integral role in achieving success in conservation programmes. During the group activity, participants were divided into five groups. Each group was given a set of fifteen photographs and was asked to build a story with a conservation angle, using the photos. Rita and Maya also gave a quick demonstration of how to use the camera for documentation in field. The participants narrated stories that included threats faced by turtles due to waste disposal into the sea (especially plastic), threats faced by hatchlings due to traffic lights on highways, etc. Both forest department personnel and TAG members participated actively in the exercise.

In addition, the online data entry application was introduced to TAG members and workshop participants. Led by Naveen, Muralidharan and Kartik, the session focused on making TAG members aware of the online application “TAGABLE”. The main objective of this online application is to enable online data entry, storage and management, including data on turtle encounters, nesting patterns, hatchery data and mortality. Data will be classified into various categories such as beach, nest, hatchery and arribada datasets. The data is retrievable by users in multiple formats and the application can be used to create representations of the data (for example, by creating maps, graphs and tables). Since data privacy is a major concern, it was clarified that data would only be accessible to data providers, and would become public only if they choose to make it so.

On the last two days of the workshop, core committee members met and discussed administration and logistics relating to TAG. Naveen reiterated the objectives, goals and vision of TAG, and presented the future agenda for the core committee of TAG. He also conveyed the minutes of the core committee meeting to TAG members. It was decided that the 5th Annual TAG Meeting would be held in Gujarat in collaboration with Prakriti Nature Club, Forest Department, Marine National Park, Jamnagar and Gujarat Ecological Commission. After the last session, participants visited the Madras Crocodile Bank.

Apart from the annual meeting, TAG also supports a small grants programme where individual TAG members are given grants to support their ongoing/new activities on sea turtle conservation. As a network, TAG draws its strength from the diverse range of expertise and experience that its members bring to it. As the network expands, it seeks to promote collaboration not just between member organisations, but also with other stakeholders including local fishing communities, coastal community leaders and researchers of various disciplines. The activities of TAG are supported through a grant from the Marine Turtle Conservation Act Fund of the US Fish & Wildlife Service and administrative support is provided by the Dakshin Foundation, Bangalore and the Madras Crocodile Bank Trust, Mamallapuram.