SEA TURTLES IN THE SOUTHERN NICOBAR ISLANDS: RESULTS OF SURVEYS FROM FEBRUARY-MAY 1991

The 22 islands forming the Nicobar Archipelago lie between 6-10°N latitude and 92-94°E longitude, spanning over 219 km. These islands are nesting grounds for leatherback (Dermochelys coriacea), green (Chelonia mydas), olive ridley (Lepidochelys olivacea), and hawksbill (Eretmochelys imbricata) sea turtles. A survey of Great Nicobar Island between the 1970’s and 1980’s (Bhaskar, 1979, 1980) showed that nesting leatherbacks and olive ridleys were most common, whereas greens and hawksbills nested in smaller numbers. However, these islands were not further investigated for a decade, and the status of the nesting population remained uncertain due to increasing disturbances and settlements in the islands. The population of the Nicobarese, for whom turtle meat and eggs formed an important component of their diet, had been rapidly increasing and the Shompens of Great Nicobar were also known to consume turtle meat and eggs; the indigenous tribes of the Andaman and Nicobars are exempt from the Indian Wildlife (Protection) Act of 1972, which protects sea turtles. Additionally, the “Ranchi” tribals, brought as government labourers to these islands, were also known to relish turtle eggs. Therefore to assess the situation, this survey of the southern Nicobars was undertaken in 1991 and encompassed six islands, many of which had never been surveyed before (Tiwari, 1991). A summary of the survey results is presented here. 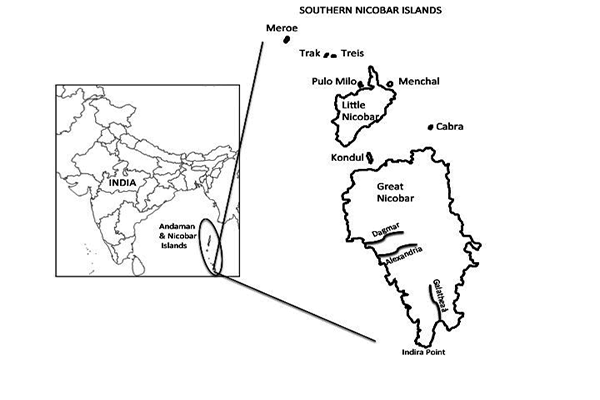 The 3-month survey (February-May 1991) included the following six islands in the southern Nicobars, of which only Great Nicobar and Kondul had been previously surveyed: Great Nicobar, Kondul, Little Nicobar, Menchal, Pulo Milo and Treis (Figure 1). Three of the remaining islands in the southern group, Cabra, Meroe and Trak, could not be surveyed due to their remote locations and the onset of monsoonal rough seas. Information on nesting turtles on these islands was collected through conversations with the indigenous groups.

Sandy beaches were surveyed on foot for evidence of nesting turtles, nests, tracks, hatchlings, bones, eggshells, and nest markers used by the local people. Areas that could not be surveyed by foot were approached by boat to locate substantial stretches of beach. Tribals, living along the coastline, and Forest Department workers were asked for information on nesting turtles, beaches, and nesting seasons. Carapaces found on the beaches or hung outside Nicobari huts were measured for CCL (curved carapace length) and CCW (curved carapace width). Turtles being reared by the Nicobarese were also measured.

Great Nicobar, the largest island in the Southern Nicobar Islands, had the largest number of sea turtles nesting on its shores (Table 1). At Galathea, many of the olive ridley nests were laid close to the tide line and the developing eggs were exposed by the spring tide. Other nests were destroyed, probably by pigs and dogs, and a large number of eggshell were scattered around the Nicobari settlement on the beach to the south of the Galathea River. West of Indira Point, the southern tip of the island, the narrow beaches were scattered with rocks and piled high with mounds of broken coral; several turtle tracks were found meandering over a 2m high barrier of coarsely broken coral. The tracks covered a long distance over the coral before returning to sea; occasionally there seemed to be an attempt to dig for a softer substratum. A hawksbill carapace (CCL= 37.7cm, CCW=34.8 cm) was also found. Two freshly killed green turtle carapaces were discovered next to an upright coconut frond, on which the bones had been le to dry (CCL/CCW=98/87cm; CCL/CCW=105/90cm). The broad beaches that straddled the Alexandria and Dagmar Rivers on the west coast had no tribal settlements, however, the beaches were regularly visited by the Nicobarese from nearby settlements and by the Shompens living deep in the jungles. Many of the nests had either been excavated by the tribals, who had left behind the yolkless eggs, or raided by dogs from neighbouring villages and possibly by monitor lizards. Tribals had driven upright stakes into the ground to indicate excavated nests. A hawksbill carapace was found north of the Dagmar River (CCL=38cm; CCW=33cm). The hole in the carapace suggested that it had been speared at sea.

Further up the northwest coast of Great Nicobar were three substantial beaches at Pulo Kunji, Dagroot and Renhong. The half-kilometre beach at Pulo Kunji was a short distance from the small Nicobari settlement, and the broader beaches at Dagroot and Renhong were both inhabited. The beach at Renhong was riddled with excavated body pits and strewn with eggshells. A Nicobari from the village con rmed that nests were commonly depredated by domestic pigs and dogs. Olive ridley turtles were also said to nest on this beach, although no evidence was found during the current survey. A substantial sandy stretch existed around Pulo-Bet, a two-hut Nicobari settlement, on the west coast of Great Nicobar; the locals reported that leatherback turtles nested here, though no evidence was found during this survey.

Along the west coast of Great Nicobar, there were several seagrass areas that may have been potential foraging grounds for green turtles. The tribals specifically mentioned a village called Cochintown on the west coast, adjacent to which green turtles were known to forage.

The only short stretches of beach to be found on the eastern and southern sides of this small island were inhabited, and there was no evidence of turtle nesting activity. Turtles were commonly caught in the surrounding waters; two hawksbills, each approximately one year old, were being reared in Nicobari homes: CCL/CCW=27.5/23.6cm; CCL/ CCW=17.9/14.2cm.

The only productive beaches lay on the southwest coast of Little Nicobar at Pulo Bahua, Monkauye and Pulo Kiyang, where leatherback, green, and hawksbill turtles were known to nest. A total of 49 leatherback nests, and10 leatherback crawls were counted. Many of the nests had been depredated, probably by the village dogs and pigs, leaving the beachstrewn with eggshells. The species could not be identified for an additional 11 nests. One green turtle carapace was found hanging from a tree (CCL= 83cm; CCW=76 cm) and another was left to decompose.

At Makachua, a village on the northwest coast, seven green turtle carapaces were found hanging outside the Nicobari huts (Table 3). The tribals on this coast claimed to eat only the green turtle,although eggs of all species were collected from the neighbouring islands of Meroe, Trak and Treis, which lie several miles o the west coast of Little Nicobar.

The uninhabited island of Menchal had only a short stretch of sand on its west coast and enormous rocks were a feature of the remaining coastline. No evidence of nesting was found, and the tribals from Little Nicobar, who visited the island frequently to collect coconuts, confirmed that no turtles nested on this rocky island.

Similar to Kondul, this island is occupied by the Nicobarese whose huts are located on the eastern coast. Apparently these tribals also harvest turtles and eggs from Meroe, Trak and Treis. One of the Nicobarese possessed a live green turtle captured at Treis four months earlier (CCL=13.3cm; CCW=11.4cm).

Access to this uninhabited island was difficult due to open sea swells and currents. Though a comparatively small island, broad beaches of coarse sand surrounded the eastern and northwestern coasts. A green turtle crawl, some green turtle scutes, and four green turtle carapaces were recorded (Table 4).

Though the broad, eastern beach of this uninhabited island was clearly visible from Treis, it was impossible to access Trak because of the increasing pre-monsoonal rough seas. The Nicobarese who visited the island during the calm months reported that turtles nested on this island, although the species was not determined.

Meroe could not be surveyed because of weather conditions and an unpredictable sea. The isolated location of the island and the treacherous currents en route make it inaccessible for most part of the year. The Nicobarese claimed to visit the island during the calm months, between January and March, to harvest coconuts, bananas, and beetlenut from their plantations. They reported year-round nesting by hawksbill and green turtles, including some daytime nesting. ey also indicated that the hawksbills of Meroe were not eaten due to a few cases of immediate death a er meat consumption. The year-old hawksbill measured in Kondul had hatched from an egg collected from Meroe.

This uninhabited island could not be visited due to its great distance from the closest island of Great Nicobar, and the non-availability of boats. The tribals indicated that no turtles nested on this island.

One of the Nicobari hunters from the west coast of Great Nicobar described a fifth species of turtle, which he called the ‘kao-heepu’. He described it as having a large head and being a little smaller than a green. It is possible that the turtle could be a loggerhead, which would be a first record for these waters.

Traditional use of turtles

Hawksbill carapaces were carved into ornaments by the older members of the Nicobari tribe; occasionally carapaces were sent to Car Nicobar Island to be carved. Green turtle scutes were used to make combs.

Based on information collected from the tribals and Forest Department workers, earlier surveys by Bhaskar (1979, 1980), and the results of this survey, leatherbacks nested from November to March with some nesting extending into July; green turtles nested primarily during the southwest monsoons (May to September), but nests were found almost year round; olive ridleys nested from December to March; and hawksbills were thought to nest on some islands year round.

Amongst all the tribals, opinions on the status of the turtle population over the past few years varied; while some claimed there was no change in the population size, others believed there were fewer turtles to be found now than in former times. Several of the recommendations proposed at the end of this survey (Tiwari, 1991) still remain to be implemented (Andrews et al., 2006) almost two decades later, because of the challenges of working in such remote locations:

• Control of the unnecessary destruction of nests by domestic pigs and dogs.
• Enforcement of laws protecting turtles.
• Control of the collection of corals and beach sand for construction purposes.
• Evaluation of the impact of the Nicobarese and Shompens on sea turtles.
• Participation of tribals in turtle conservation activities.
• Environmental education programmes in schools.
• A systematic scienti c study of the nesting turtle species and their feeding grounds.
• Extensive nesting surveys of the islands.
• Establishment of an e ective conservation programme.

I am grateful to Satish Bhaskar for his invaluable advice and to Vishnupriya for all her help in the islands. Special thanks to my field assistant Ratnam, as well as to Captain Henry and his crew for the use of their boat.

I want to thank the following people for their help in solving various difficulties during my fieldwork: Srinivasan, Dr. Das, Unnikrishnan, M.P. Singh, the AWPD Campbell Bay, the Police Radio-Campbell Bay, Virendra Kumar—Assistant Commissioner at Campbell Bay, Venkat and Vimla, Rajeev Sharma, Armugam, Phulchand, Ramaiya, M.V. Gangadharan, Allan Vaughn, the Karens and Paong, Mr. Afradi—Director of Tribal Welfare, Dr. T.N. Pandit—Deputy Director Anthropological Survey of India, and all the islanders who helped along the way. I am also grateful to the Forest Department for their help and cooperation and to all the tribals of the Nicobars for their warm hospitality. I thank Romulus Whitaker, Harry Andrews, Indraneil Das, the Madras Crocodile Bank, S. Jaganathan, and the Andaman and Nicobar Environmental Trust for their support of this study. Finally, I want to acknowledge the use of MAPTOOL, a product of seaturtle.org, for the map of the southern Nicobars.