In 1998, Watamu Turtle Watch (WTW) launched a compensatory release programme for sea turtles incidentally caught as by-catch by artisanal fisherman, in the Watamu area. The programme was first established in response to the high number of sea turtles being captured and consumed by local communities and has gone from strength to strength since it began.However, compensating fishers for turtle release is not without opponents within the turtle research and conservation community.

WTWs programme does not promote the deliberate capture or selling of sea turtles. A nominal fee (approx. $3.50 US Dollars, dependent on size) is offered in exchange for the safe release of any sea turtle accidentally captured by fishermen. This amount is significantly less than the high price turtles command on the lucrative illegal market for meat, oil and carapace, as there is still high local demand for these products some fishermen continue to harvest turtles. The By-catch Net Release Programme operates along 25km of coastline incorporating it across the 11km Mida Creek with its many channels.

Mida Creek (Figure 1) is a saltwater inlet surrounded by a mangrove forest, within the Watamu area. The creek and associated lagoons, where coral, sea grass and mangrove habitats are found, provides ideal foraging areas for juvenile green and hawksbill sea turtles all year round.

Local fishermen rely on the creek as their main source of income. With the influx of people to the coastal regions, the area is now quite heavily fished, leading to lower catch rates. The mangroves also play an important role as nurseries to a number of other marine species. 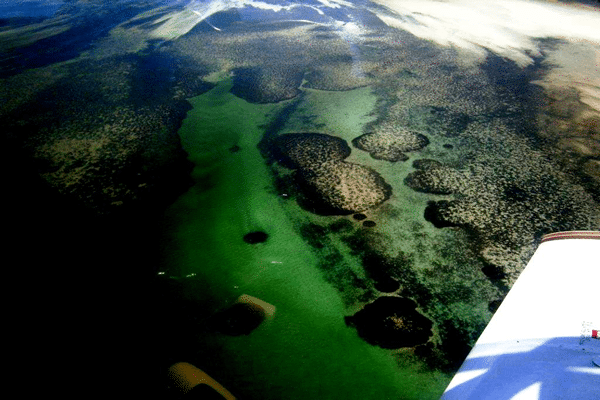 There are strict protocols that must be adhered to when dealing with sea turtles within this programme. This is essential to ensure our procedures are standardized and the LOT Team is able to deal with a wide variety of situations as and when they may arise.

When a turtle is caught in a fishing gear, the fisherman extricates it, calls the by-catch hotline number and then returns with the turtle to his landing site. Although fishermen were made aware of how best to minimise stress to the animal while awaiting the arrival of the WTW team, sea turtles were still being ‘flipped’ onto their backs in order to immobilize them. In response to this, holding boxes were constructed and made available at each of the landing sites to contain turtles awaiting release. A WTW team member attends each release, assesses the sea turtle for any signs of injury, disease or parasites, collects biometric data (Figure 2) and tags the turtle. The fisherman is then compensated for their time and effort with the amount being determined by the size of turtle. The turtle is then transported to a safe point on the beach and released (Figure 3). If the turtle has external parasite infestation, e.g. barnacles or leeches, they are removed in the field if possible; if the infestation is extensive, or the turtle is sick or injured, it is brought back to LOT: WTWs rehabilitation centre for further assessment by the veterinarian, who advises on treatment and follow up care where necessary.

The turtles that exhibit symptoms of ill health such as dehydration, fatigue, fibropapillomatosis, malnutrition or injury are admitted to the Local Ocean Trust’s Sea Turtle Rehabilitation Centre for diagnosis and treatment, after which they are released. To our knowledge, the centre is the only such facility in Eastern Africa and has treated over 170 turtles, out of which more than 70% have been successfully released. 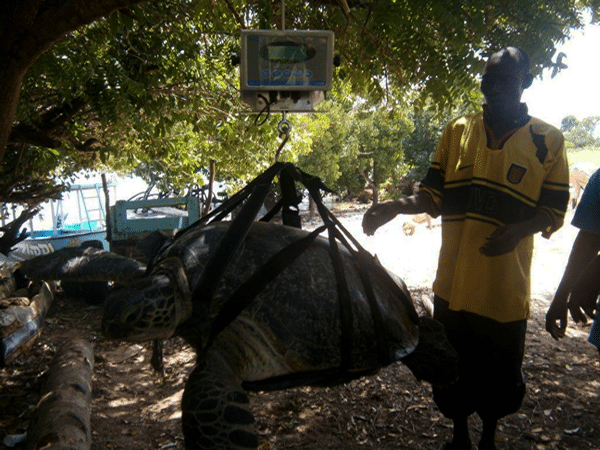 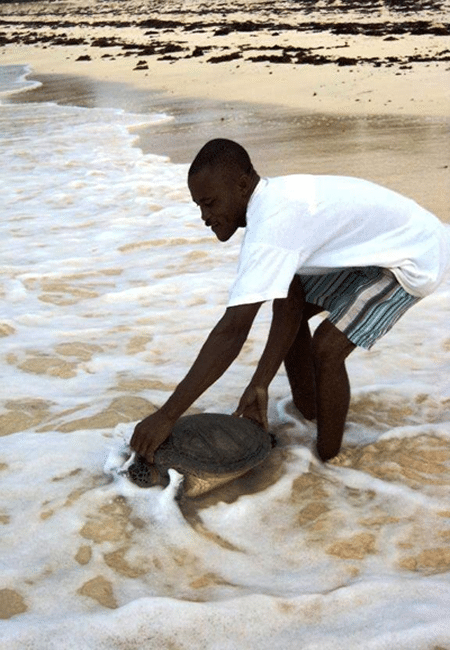 Jiwe, a large male green turtle, was admitted to the rehabilitation facility after being severely injured (Figure 4) by fishermen who had caught him in nets at sea. The turtle was dragged on to the beach from their boat where he was beaten with a rock until local residents stepped in and brought him to the LOT rehabilitation facility. Unfortunately the injuries this turtle sustained were too severe and it died. This tragic outcome clearly demonstrates the need for LOT: WTW and for sustained education and awareness within the community.

During releases it is sometimes necessary to break the fisherman’s hooks or nets in order to release a sea turtle safely. If this is necessary and is carried out by a member of the LOT team, hooks are replaced. The LOT team also carries string to repair fishing nets where necessary. We do not, however, fully compensate fishers for the damage a turtle may cause to fishing gears as this can vary in cost.The programme does not amend or increase the compensation amount as this sets a precedent for people to demand increased compensation on a regular basis. 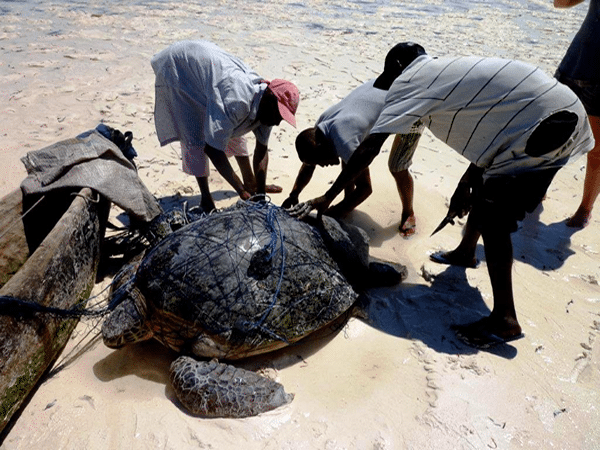 LOT team members have recently been given information by a number of fishermen who have been approached and asked for live sea turtles to be shipped to Mombasa from the Watamu area, in order to be killed in a specific way to be sold to Muslim and far eastern markets, where the demand is high. There is indication that the demand for sea turtle meat and artifacts is on the rise in many cities around the world, including countries in the Far East. As this local information is anecdotal, the LOT team continues to explore ways to gather evidence of emerging markets for turtle products in the area.

How Far Have We Come?

The By-catch Net Release Programme has come a long way since its inception in 1998. Emerging against a backdrop of limited funding and support, the program conducted 16 turtle releases in 1998 with participation from 14 fishermen. By 2011 the project had grown exponentially with 1,365 turtle releases conducted in cooperation with over 300 fishermen. With 1,638 turtle releases conducted by the 31st December 2012 has registered the highest annual total of turtle releases to date. Since the programme began, a total of 9,015 sea turtle releases have been conducted in total (Figure 5). All healthy turtles are flipper tagged prior to release. This is essential as it allows the LOT team to monitor individual turtles and turtle population dynamics in the Watamu area. Between 1998 and 31st December 2012, a total of 4,387 turtles had been tagged. In the last 5 years 2006-2011), a total of 2,602 turtles have been tagged compared to 458 tagged over the first 5 years the program ran (1998-2002). The total amount of compensation that has gone into the fishing community between 1998 and 2011 isKES 2,764,850 (approx. $33,000 USD). The project feels the relatively high cost of the programme does not outweigh the benefits of having such an initiative in place. In addition to the obvious economic benefits to the local community, the data collected through this programme has also enabled LOT:WTW to estimate population sizes within Mida creek and recent analysis suggests that this population has been steadily increasing. In 2006/2007 we estimated a sea turtle population of 1,579, which rose to 3,993 by 2010/2011, perhaps suggesting that this programme is having a positive impact on the number of protected sea turtles in local waters. All data gathered is now efficiently stored in a bespoke database where dates, species, tag ID’s, catch sites, fishermen’s details, payment etc. are all recorded. This system allows project staff to check tag numbers, track capture sites of specific turtles, identify key foraging areas within Mida creek and ‘hot spots’ for fibropapillomatosis. 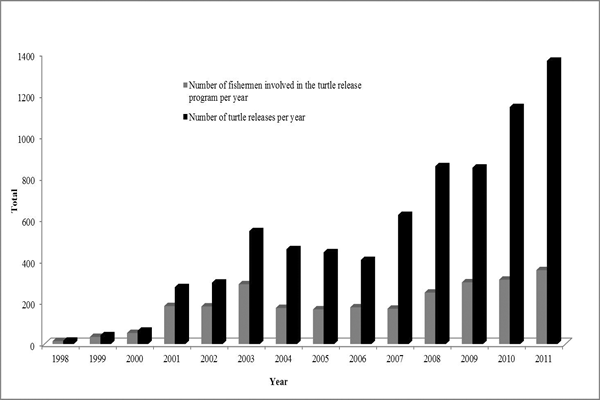 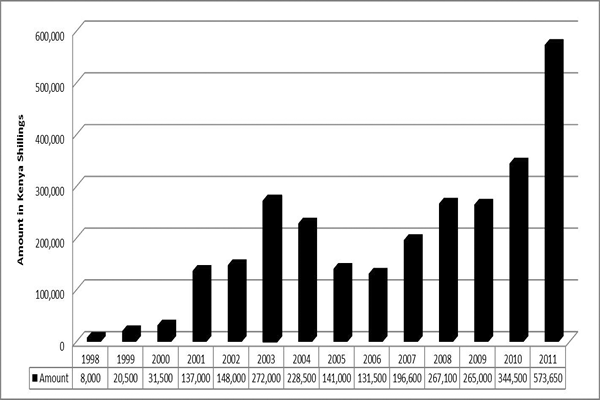 Many people have asked the following questions, “If you have been conducting successful education and awareness in the community for over 10 years, why do you still need the by-catch programme?” and “Why are the fishermen not setting the turtles free without payment?”

LOT: WTW work very hard to change people’s attitudes towards marine conservation, however the LOT team is well aware that the socio-economic pressures on these

people are immense. Turtles can cause major damage to fishing nets which can have devastating impacts on a fisherman’s livelihood. With local catches at an all-time low, many fishermen cannot afford to lose out on days of fishing due to broken nets. Conservation initiatives throughout the world face an enormous challenge in expecting people who live hand to mouth, to give up a meal for themselves and their family or lose a day’s fishing for the sake of conservation. Not only that, but with the cost of living increasing, the economic pressure on households is now more intense than it was10 years ago. The meat from a single green sea turtle, measuring 1 metre, can fetch over 10,000 shillings (over $115 USD) when traded illegally. A sea turtle of this size can also yield up to 8 litres of oil, each litre being sold at 3000 shillings ($35 USD). Even if a turtle is not sold, it represents a meal that can feed a family, in a time where over fishing is seeing catch levels fall and competition between fishermen high.

Despite these pressures and the potential economic benefits of trading illegally in turtle products, many local fishing communities embrace the LOT: WTW conservation initiatives and the LOT team believe that this is why they are seeing a steady increase in the number of fishermen joining the programme and the number of turtles being released. The project has not raised the level of compensation even though the price of turtle meat and other products continues to rise. Keeping the level of compensation low avoids the risk of encouraging people to actively catch sea turtles.

However, LOT: WTW believes that, without an incentive, sea turtles would not be released. Ongoing education and awareness is vital to the success of the by-catch programme. The project continues to work closely with fishing communities and is currently engaged with 26 local schools based around the fish landing sites. The children learn about the importance of the marine environment and seaturtle conservation. Maintaining a good relationship with local fishing communities is the key to success of the programme.

“I have been fishing all my life, fishing is in my blood. I have seen with my own eyes that there are less fish to catch and there are less turtles than when I was a boy. I survive because of the ocean. I joined the by-catch programme as a way of ‘giving back’ to the ocean for all it has provided for me.” 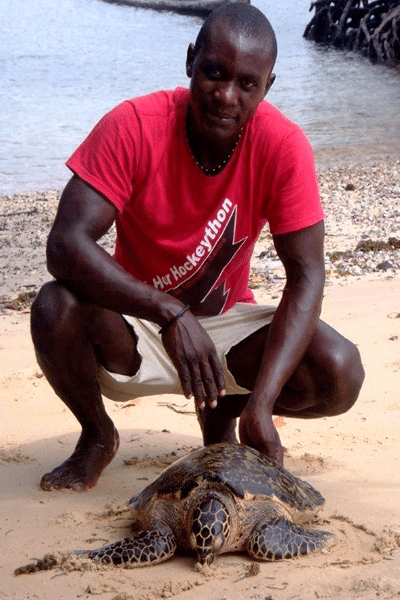