Pakistan Wetlands Programme was launched in July 2005, with a broader goal of conserving globally significant wetlands biodiversity in Pakistan. The project embarked upon an ambitious portfolio with 10 outputs and 86 sub-outputs to achieve its two objectives of: a) Creation of an enabling environment at the national level through capacity-building and training, awareness raising, communication and environmental impact assessments; and b) Developing replicable models in the four wetlands eco-regions of the country including the Makran Coastal Wetlands Complex (MCWC), Central Indus Wetlands Complex (CIWC), Salt Range Wetlands Complex (SRWC) and Northern Alpine Wetlands Complex (NAWC). The sub-set of activities under the second objective included conservation of marine turtles at Dharan Beach, one of the marine turtles nesting grounds on Makran Coast in Balochistan Province (Figure 1). The conservation efforts on Dharran Beach included patrolling the beach, safe release of hatchlings and satellite telemetry of marine turtles.

Five species of marine turtle are recorded from the coastal waters of Pakistan. Dominant among them is the green turtle (Chelonia mydas), which breeds regularly on beaches of Sindh and Balochistan provinces. The other four species, including olive ridley, loggerhead, hawksbill and leatherback turtles. are rarely observed. The WWF- Pakistan’s Pakistan Wetlands Program (PWP) conducted a study of their biology to identify threats to turtle populations and nesting beaches on the Makran Coast in Balochistan. Satellite telemetry was conducted by PWP to determine what threats nesting green turtles of the Makran Beach may face elsewhere and to determine their migration routes and feeding grounds. This article describes the efforts of the PWPat Daran Beach to conserve the nesting population of the green turtles.

Makran Coastal Wetlands Complex (MCWC) extends westwards along Baluchistan’s Makran Coast from the Basol River to Jiwani on the border with Iran. Local communities are dependent on fishing and port activities that have led to pressures on marine biodiversity through over-harvesting and pollution. This has impacted the populations of green turtles and olive ridleys nesting along that Coast. The Programme worked with the local community of Daran to conserve the nesting beaches of green turtles there by motivating and raising awareness in the local community, capacity building and training, and by providing incentives to enhance community development and alleviate poverty.

I. Conservation and research on the nesting beach

In 1999, before the PWP, WWF Pakistan had initiated conservation of green turtles in collaboration with the Daran community. Most of the work was on one beach of Daran. With inception and launching of the Makran Coastal Wetlands Complex, the PWP took over the marine turtle conservation program from WWF Pakistan. It later extended its jurisdiction to three beaches of Daran, which are owned by the Daran Community. Green turtles are commonly found nesting on the sandy beach at the foot of the cliffs, about 10 km south east of Jiwani. This area is divided into five consecutive parts from east to west, separated by cliffs: Daran Taak, Shaheed Taak, Jangan Taak, Deedlo Taak and Picnic point. Each part extends for around 1.5km to 2km. The PWP conducted its conservation efforts on the beaches of Daran Taak, Deedlo Taak, and Picnic point. The Daran village is situated in the eastern side of Jiwani city, which is close to the Iranian/ Pakistani border (Figure 1). It has sandy cum rocky beaches and most land cover is calcareous rocky bed. 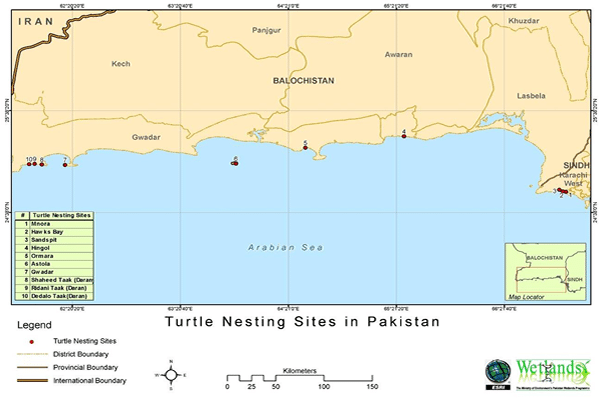 The livelihood of the local community is agro-pastoral in nature with fishing to subsidize their livelihoods. The local human population is not more than three hundred and all three beaches stretch on six km.

According to findings, particularly from 2010 and 2011, the nesting season on Makran Coast starts in July, peaks in November, and declines after February (Figure 2). To protect egg clutches and hatchlings from their natural predators which include sea gulls, crows, jackals, foxes and dogs, six turtle watchers were recruited from the local community. From July 2007 through 2012 the watchers patrolled the area at night during the breeding season from July until April/May. During their patrols, the turtle watchers monitored female turtles as they emerged from the sea and nested on the beach. On completion of nesting, the turtle watchers placed a wire-mesh enclosure on each nest, with nest being labeled with a number, date of nesting and expected hatching date. They also recorded this information in their register (Figure 3). 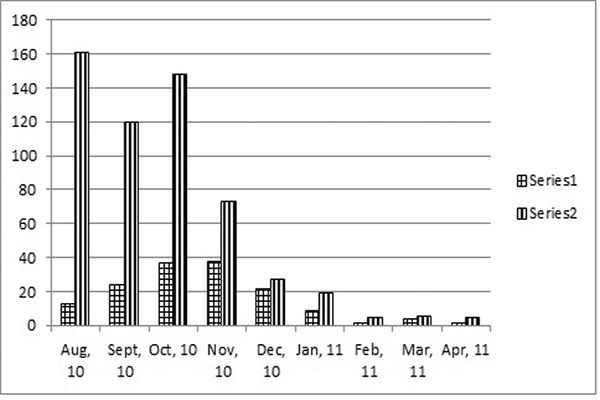 Around the expected hatching date, the turtle watchers monitor the nest in the early morning to release any hatchlings that emerged from the nest and accumulated in the wire-mesh enclosure. The usual mortality rate during travel of hatchlings from nest to sea, usually 30% to 40%, was completely eliminated by the patrolling and monitoring of nests with subsequent safe release of hatchlings to the sea. In addition, the turtle watchers dug up the contents of the nest after hatchling emergence and counted how many eggs hatched successfully and how many failed. Record were maintained on numbers of egg clutches laid, number of unsuccessful nesting attempts, and rates of hatching success at nest sites. 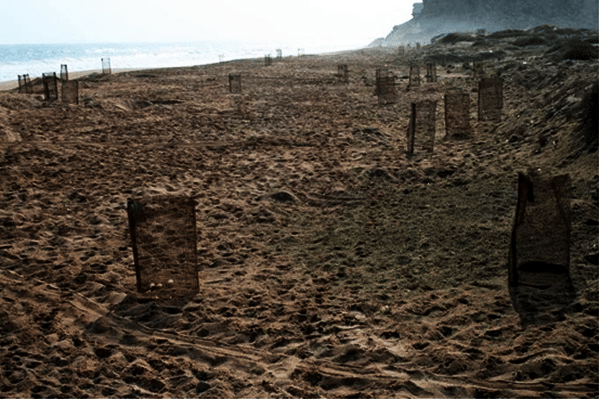 From October 2007 through April 2011, a total of 2580 nests were protected, from which ~26,000 hatchlings were safely released to the sea (Figures 4 and 5). The 3368 eggs laid in November 2008 was the highest number of eggs laid in a month. The number of nests recorded during the study period was different across the year indicating the fact that the population of the nesting turtles was fluctuating. 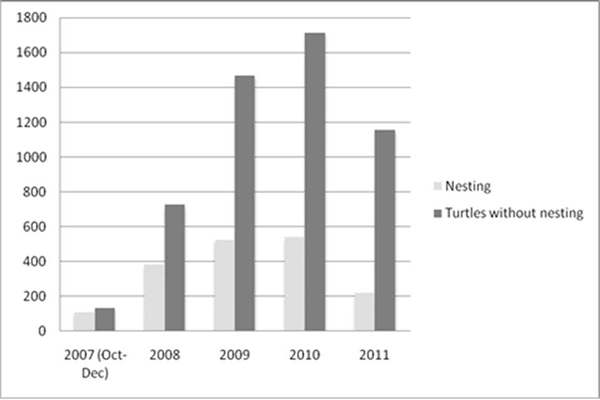 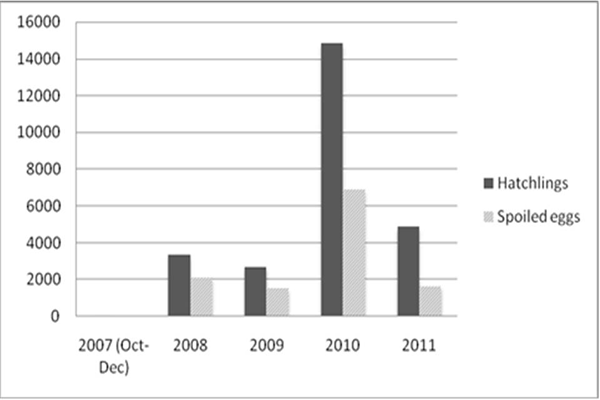 Figure 5. The number of hatchlings and unhatched eggs on nesting beaches of Daran Beach, 2007-2011.

To understand the post-nesting migrations of marine turtles nesting at Daran beach, a satellite telemetry study was conducted. A total of 15 female green turtles were tagged with Telonics A1010 transmitters during 2009- 2012. The transmitters were attached to the second and third vertebral scutes of the carapace with 3M marine glue, and were strengthened by putting fiberglass cloth on top with resin solution. The natural movements of 12 of the turtles were successfully tracked, but three of the turtles appeared to have been picked by boats, since their movements were tracked as straight lines from Gwadar to Gulf States for a few days. The three transmitter signals stopped, when an effort to recover the lost/ picked three transmitters was launched. Nevertheless, tracking of 12 of the turtles indicate a successful effort.

The results of this tracking portray daily movements of marine turtles between the Jiwani and Irani Coast. The most visited sites were Jiwani and Bandar Abbas, with turtles remaining for about 1.5 to 2 months in these areas. Two turtles, one tagged on Astola Island and one at Daran, travelled as far as UAE and appeared near Um- Alqueen (Figure 6 for the track from Daran to UAE). The westward movements of the turtles were successfully tracked to Iran, Iran, Qatar and UAE. No signals from transmitters were received from the Oman area, though. The eastward movements of two tagged turtles were tracked till east coast of India. The turtles traveled along the Makran Coast and reached the Sindh Coast in Karachi, from where these travelled to the east coast of India (Figure 7). 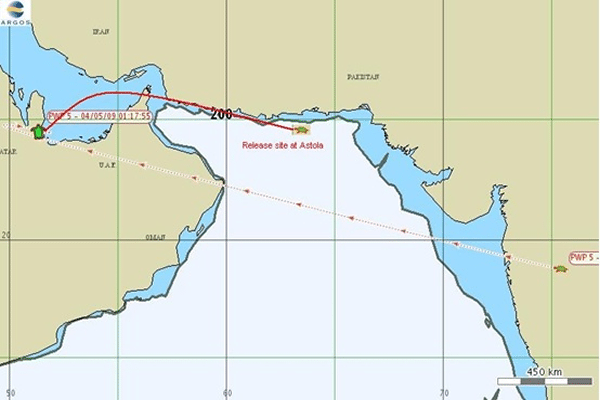 Figure 6. Post-nesting migrations of green turtles from Daran to UAE; the dotted arrowed line is between the test site of transmitter (Islamabad) and the active transmitter, while the solid red line shows the turtle movements. 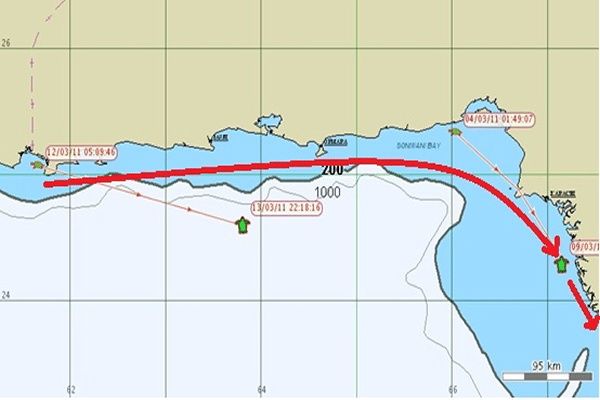 Daran is located off-road of Jiwani Town and has limited economic opportunities for the local community clustered in a 20 household hamlet. To

motivate the community of Daran village and ensure their support for turtles conservation on Daran beach, a few initiatives were launched in consultation with them, including a community primary school for the children of the community, wind turbine and solar hybrid system to provide energy for lighting in the village and replace kerosene lamps, and build their skills in improved agriculture and livelihoods. This worked effectively and the community’s support was ensured for conserving turtles.

The Pakistan Wetlands Programme used enclosures made from wire mesh, which are subject to corrosion and thus last no longer. This approach was adopted for cost-effectiveness and to utilize local skills. There is a need to use material such as fiberglass that last longer, can be re-used several times and thus might have a lesser environmental footprint.

When the Pakistan Wetlands Programme ended in June 2012 the initiatives had to stop. Further funding is needed to ensure that the activities continue or the significant achievements made to date will be wasted. Although WWF Pakistan and the Balochistan Forest and Wildlife Department are making efforts to continue the conservation efforts at Daran, there is a need for resource mobilization to maintain the activities of the past few years.