A group of Watamu residents involved with a local naturalist, Barbara Simpson, and her sea turtle nest patrols, consequently decided to increase their conservation efforts in the area. Their commitment and hard work resulted in the formation of Watamu Turtle Watch (WTW) in 1997. By 2002, in the face of extensive degradation of Kenya’s coastline and reefs, WTW had clearly recognized the need for a more broad based marine conservation effort and Local Ocean Trust (LOT) was born. LOT is a marine conservation organization committed to promoting the sustainable use and management of Kenya’s marine resources. The Trust undertakes general marine conservation work locally and nationally, promoting the protection of Kenya’s MPAs. The name ‘Local Ocean Trust’ aims to encourage people to look after their own local ocean and promote the sustainable management of our marine resource.

In Kenya, there is mounting concern as the marine environment suffers increasingly from a range of anthropogenic threats, exacerbated by a lack of sustainable management, and a need for greater understanding of and respect for this precious resource. With the advent of mass tourism, increased coastal population, commercial fishing fleets, as well as the realization that our seas may hold rich petroleum fields and minerals, the pressure on Kenya’s coastline and coastal waters has vastly increased. Around the world marine conservationists have pointed to the plight of sea turtles, a flagship species, as a key indicator of the fragile state of our oceans.

WTW have successfully run a nesting monitoring and protection programme for over 15 years, with the cooperation and support of the local community. Dedicated field staff carry out nightly beach patrols; in 2012, staff tagged and monitored more nesting females than any previous season. Nest monitoring has expanded over the years and now incorporates a number of beaches along the Kenyan coastline, including an extension of WTW on the South coast.

Watamu and the neighbouring beaches are predominantly Chelonia mydas nesting beaches but an increasing number of Lepidochelys olivacea area being encountered. Nesting females return every 3-5 years and lay on average 4 clutches of eggs per season. Since the inception of the nesting programme over 550 nests have been monitored and protected in situ, with an average hatchling success rate of over 70%. This percentage also includes nests that have been poached, washed away by high tides as well as non-viable eggs. In addition to natural pressures, nesting populations in Kenya face a range of serious anthropogenic threats, including extensive poaching for meat, carapaces and oil. Nesting females and hatchlings face additional significant pressures including illegal beach structures, sea walls, sun beds and umbrellas as well as bright artificial lighting from hotels and homes which cause disorientation.

By 1998, WTW had gained an understanding of the extent of sea turtle useby fishermen in the Watamu area and a trial ‘compensatory net release programme’ was implemented for turtles incidentally caught by local artisanal fishers. 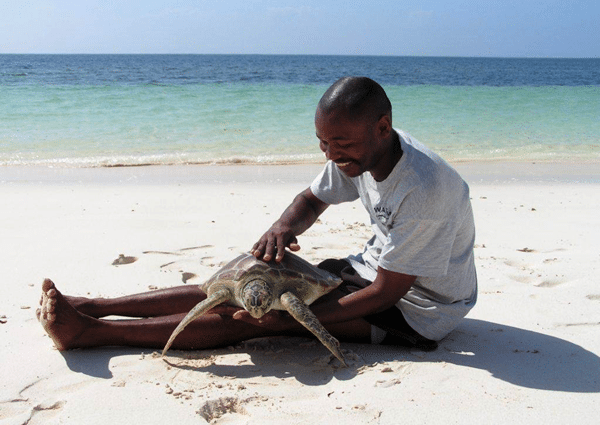 The programme encourages artisanal fishermen to release, rather than slaughter their accidental sea turtle by-catch and has grown steadily since its inception in 1998, with each year seeing an increase in the number of participating fishermen as well as the number of turtles being released. A small compensatory sum of approx. $3.50 USD (dependent on turtle size) is offered to the fishermen for their time and effort. The programme works alongside LOT’s education and community awareness programmes, in order to maintain cooperation with local fishing communities and its success reflects progress towards a change in local attitudes towards conservation.

The LOT: WTW By-catch net release programme is believed to be the longest running programme of its kind worldwide. This programme has highlighted the Mida Creek Reserve and Watamu MPA as nationally important foraging grounds for juvenile green and hawksbill turtles, which have been found to reside there all year round.

In response to a number of sick and injured sea turtles being reported to LOT: WTW, a rehabilitation facility was built in 2003. This facility has expanded over the years, to include 9 tanks and a treatment clinic. The project liaises with a local vet who visits the centre on a weekly basis and assesses any newly admitted turtles. A variety of conditions are treated, including fish hook and spear-gun injuries, boating accidents, flipper amputations, exhaustion, infection and disease. The number of turtles admitted to the centre has been steadily rising each year. Most animals come through the LOT: WTW by-catch net release programme that runs all year round, but the centre also receives turtles from adjacent areas of the East Africa coast. The centre has been home to over 170 turtles since it began and over 70% of these turtles, that would probably have died without medical assistance or care, have been successfully released.

A database has been set up to manage 15 years’ of field research data. Allowing project staff to develop a much improved understanding of Kenya’s turtles, including population estimates, population feeding patterns, and prime catch areas. A hatching model, using temperature, weather patterns and 14 years of previous data, has also been developed to more accurately predict emergences. This model has been invaluable and has enabled staff to successfully predict and attend 98% of “nest emergences” during the last season. The database has also made it possible to highlight ‘hot spots’where turtles with fibropapillomatosis have been encountered. LOT: WTW also collect data during monthly beach surveys to track changes in topography, and indicate areas ideal for sea turtle nesting and show areas that are poor nesting sites.

LOT: WTW are currently engaged with 13 community groups, raising awareness about conservation issues as well as supportingcapacity building and training. Staff work alongside the community to conduct beach clean-ups and mangrove restoration. The organisations motto ‘love your local ocean’ is used to emphasize the importance of local people taking ownership of their natural environment in order to preserve for the future.

Twenty-six local schools are currently taking part in the education programme which offers children the opportunity to learn more about sea turtle conservation, coral reef ecosystems and mangrove protection. The LOT team teach children about the importance and benefits of protecting their local marine environments and all its inhabitants. The project also welcomes international schools and universities and receives local and international university interns on a regular basis. In addition, the Marine Scout programme is designed to encourage young conservationists and teaches young people basic scientific surveying and species identification skills, as well as allowing them to assist in by-catch releases and data collection. Please ‘like’ us on facebook to follow our work.