Eritrea’s coastal and marine areas cover more than 121,000 square kilometres, include more than 350 offshore islands, and are pristine compared to other parts of the Red Sea that have been degraded by development. The Eritrean coast (Figure 1) is home to an array of marine wildlife, including five species of marine turtles: green, hawksbill, olive ridley, loggerhead and leatherback turtles. Three of these species, green, hawksbill and olive ridley, nest on Eritrea’s beaches. All species appear on the IUCN Red List of Threatened Species and are listed on Appendix I of CITES.

From 2000 to 2008, the Ministry of Marine Resources worked to conserve sea turtle through the Eritrea Coastal Island and Marine Biodiversity Project. More than 120 islands and coastal sites were surveyed for turtle nesting, and some hawksbill nesting, tagging and morphometric data were collected. These surveys included the first record of an olive ridley nesting attempt in the Red Sea.

The main threats to turtles in Eritrea are disturbance of nesting and foraging habitats, incidental net captures (gillnets and trawlers), poaching of meat and eggs, lack of adequate protection and enforcement, and limited public awareness. Although there are no records of over- harvesting, sea turtle eggs and meat are consumed locally by communities and fishermen at a subsistence level, and turtle oil is valued for medicinal purposes, as it is believed to cure several ailments. Many years ago, hawksbill turtle carapaces were sold abroad for ornamental purposes. Although conservation and management efforts were active between 2005-2007 in some areas of Eritrea, including the offshore islands of the Dahlak archipelago, the conservation status of marine turtles in Eritrea remains largely unknown. Information concerning population dynamics is incomplete, whilst knowledge on nesting populations and feeding habitats is patchy and almost non-existent for developmental habitats. 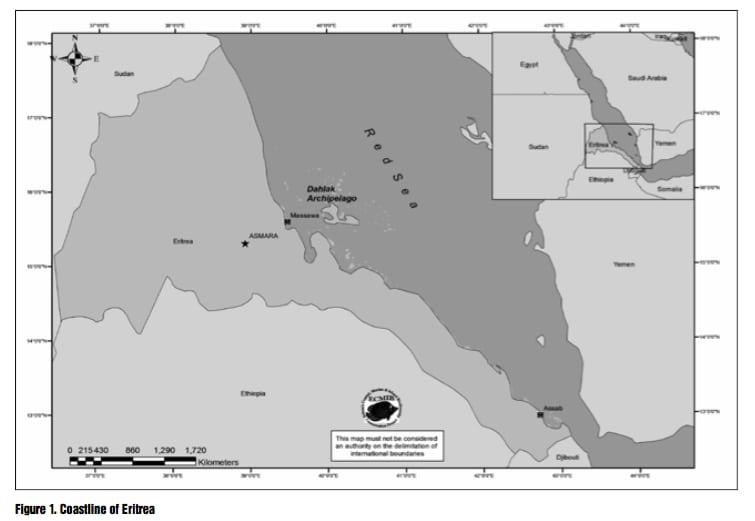 Management options to reduce incidental take of marine turtles in fisheries, notably trawlers and gillnets, include the use of turtle excluder devices (TEDs), reduced tow or soak times, and restricted use of fishing gear in important turtle habitats. Existing Eritrean fisheries regulations state that fishing vessels operating in Eritrean waters must use TEDs in all trawl nets to reduce the mortality of turtles and other megafauna. For various reasons, TEDs have not been commonly used, but their use is now mandatory in the new fishing agreement with industrial trawling investors.

The existing Eritrean fisheries regulations state that fishing vessels operating in Eritrean waters must restrict their fishing activity to authorized zones and trawl at least 4 miles from islands, 8 miles from the mainland and at depths of more than 30m, to reduce the chance of sea turtle bycatch. In the event of incidental capture, turtles and other megafauna must be returned to the sea immediately, whether dead or alive. However, due to the lack of appropriate handling experience of on-board observers and fishermen, turtles have been improperly released (while comatose or lethargic, or thrown from the stern into the sea), which decreases their chances of survival. Sometimes fishermen would kill a turtle entangled in their gear, to reduce damage to their nets, and use it for food.

Data about incidentally caught turtles is available from booklets maintained by the Monitoring, Control and Surveillance Division of the Ministry of Marine Resources. The data includes the date of incidental catch, species type, position of catch, depth, time of trawling and condition of the incidentally caught turtles. So far the greatest threat to sea turtles is the shrimp/ fish trawling associated with the main shrimp fishing grounds between islands, where turtles frequently migrate to nest and forage. Several Egyptian and other foreign-owned trawlers, in addition to a few national trawlers, have been operating in the Eritrean Red Sea.

A sea turtle field training course, complemented with practical demonstrations, was given to on- board observers of industrial shrimp/fish trawlers in 2007. Twenty copies of a photographic key to Indo-Pacific marine turtles and the other marine mammals, which can help on-board observers’ identify the captured species, and measuring tapes were provided.

Flipper tagging was conducted in Mojeidi (Southeast Dahlak), and other islands and coastal nesting areas, using titanium flipper tags with the series ERI 001- ERI 1000 and a return address to Eritrean Ministry of Fisheries in English and Arabic. Ninety-six female hawksbills were tagged during 2006, 47 of which were tagged from 18th May to 3rd June 2006 in Mojeidi only. In 2005, four hawksbills and one olive ridley were also tagged in different coastal areas of Eritrea. The tag-recapture program has been ongoing since 2005 and allowed the recapture, in 2007, of two female turtles tagged at the major turtle nesting area of Mugeidih Island. The future plan is to tag turtles, especially greens, on-board shrimp trawlers in order to elucidate their migration routes.

Domestic trade of turtles is forbidden according to the existing Eritrean fisheries regulations. There are reports that turtle products are sold illegally and there are gaps in implementation of protection measures. Nevertheless training and education/awareness programmes are ongoing. The Military, especially the Navy, has been in full support of turtle conservation activities and are penalizing their staff and locals for contravening regulations.

The Eritrean Navy held ‘Fenkel 2010’, from 12-14th February 2010, as a national event to promote the conservation of endangered marine species of the Eritrean Red Sea. Models of a giant sea (Figure 2) turtle, dugong and sawfish shark were displayed during the magnificent carnival show that coincided with the official opening of the festival on 13th February. The aim was to increase understanding and create awareness about marine biodiversity and its conservation needs by relevant governmental and non-governmental organizations. The event was observed in the port compound of the city of Massawa. Invited quests and higher officials, people from different sectors and organizations of the region, and members of the national media were in attendance. The President of the State of Eritrea, H.E. Issaias Afewerki, Ministers, Regional Administrators, Religious Leaders, and thousands of people attended the ceremony. The occasion was broadcast live via satellite through the Eritrea National Television channel (ERI-TV), watched by millions of people inside the country and abroad.

The sustainability of sea turtle conservation efforts depends mainly upon the participation and education of local people. Efforts to enhance public awareness through the fishermen cooperatives were undertaken at every coastal village and island, including fishing camps. The involvement of indigenous people and community based conservation projects is considered essential for future turtle conservation programmes. In practice, frequent meetings with the Derrder (Sultan) of the (indigenous) Afar Community have resulted in fewer turtle killing practices in some areas. 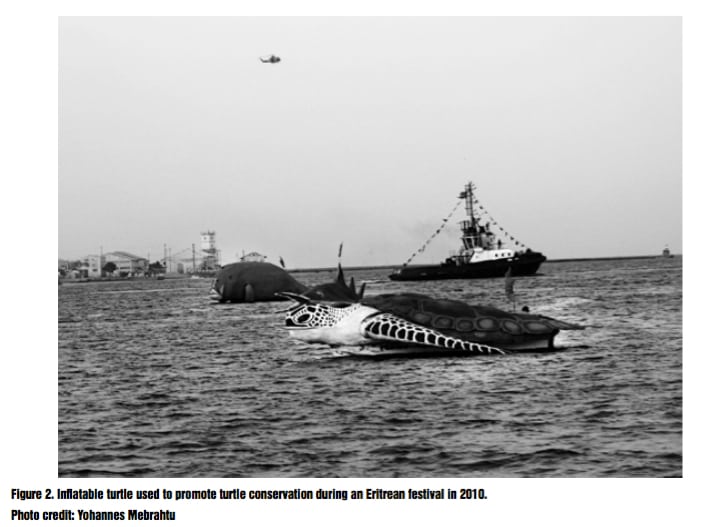 A juvenile and an adult female hawksbill turtle were released to their natural habitat on 15th of March 2012 after a period of convalescence and being nursed back to health from injuries caused by incidental capture. The programme, which was held at the Port City of Massawa, was designed to publicize this work and highlight the need to protect marine species and their habitats along the coast and islands of the Eritrean Red Sea. The activity dominated the country’s main broadcasting national media channels, including the main news on ERI-TV, radio and newspapers, with coverage in at least five native languages, Arabic and English. The hawksbills were the first species to be tagged with titanium flipper tags in front of the public and the media (Figure 3). 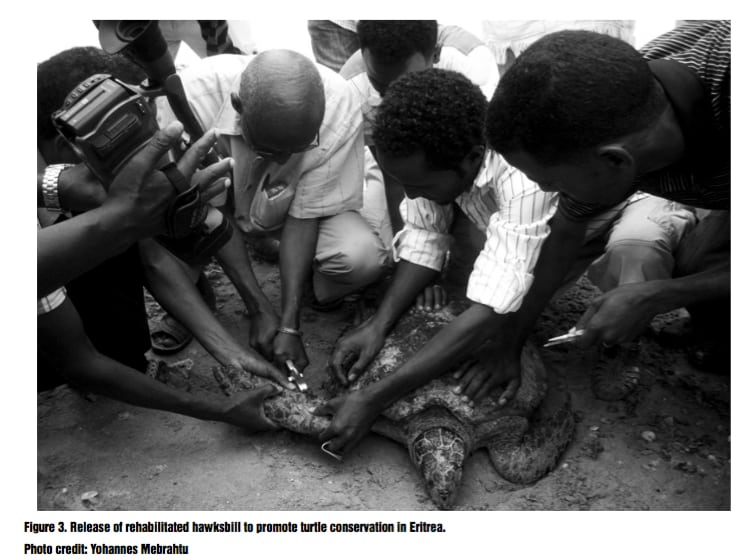 In collaboration with the National Union of Eritrean Youth and Students (NUEYS) a sea turtle club was established in the town of Assab, an active Eritrean coastal area with a lot of fishermen and a fish-landing site. An illegal market for turtle meat persists in the area. Teaching children of these fishermen will help indirectly raise awareness on turtle issues among older fishermen and directly raise awareness in future fishermen. The Ministry of Marine Resources has equipped the club with some educational and recreational materials, such as a satellite dish and TV for viewing environmental documentaries and films.

The drafting of the 2008 coastal policy that defines the coastal area, with 100 meters of setback from a fixed geological feature near the coastline, and the Integrated Coastal Area Management proclamations for the entire coastal area of the Eritrean Red Sea as ‘Multiple Use Managed Area’, are supposed to support the endangered marine turtle populations. In addition, a core national Marine Protected Areas (MPAs) network and a species conservation programme have been established with necessary technical and legal documents to declare two MPAs for their species and educational purposes. From more than 100 sites discovered to be turtle nesting areas, 40 sites have been identified for marine turtle research and conservation programmes.

Those critical habitats that will be outside future protected areas can be declared as sanctuaries and regulated as such according to the 2005 Sea Turtle National Action Plan. Marine turtles also feature prominently in plans to set aside MPAs, which will safeguard these resources and leave behind a longstanding legacy for future generations. Eritrea aims to become the first country in the world to turn its entire coast into an environmentally protected zone, to ensure balanced and sustainable development.

As most turtle nesting sites are located on remote offshore islands, Eritrea could become a safe area for endangered marine turtles and possibly seed other areas of the region that have lost their marine turtle populations. Eritrea’s interest in its marine resources in general, and particularly marine turtles, is reflected in the country sig  ning the IOSEA Memorandum of Understanding in 2006, which made Eritrea the 24th Signatory State in the region.