The leatherback turtle (Dermochelys coriacea) is rarely observed on the coast of mainland India (Shanker, 2013). Here I report the occurrence of a dead stranded leatherback found on the shore near Utukuru fishing village, Vidavalur Mandalam, Nellore District, Andhra Pradesh, India, on 6th January 2013 (Figure 1). The turtle was discovered by TREE Foundation’s Sea Turtle Protection Force members, from a local fishing community, while they were on their regular morning sea turtle patrol. The leatherback had two injuries: a crushing wound on the top of the head, and a deep puncture on the left hind flipper. It was difficult to ascertain whether the injuries occurred pre- or post- mortem. The turtle measurements were as follows: curved carapace length= 122cm, curved carapace width= 81cm, head length= 36cm, front flipper length= 60cm, hind flipper length= 36cm. Although there was no scale available, I estimate the turtle weighed approximately 200kg, given that it took more than seven people to move the turtle for burial. Based on the size, I presume that the leatherback was a sub-adult, although smaller adult leatherbacks have been documented nesting in various locations (Stewart et al., 2007). 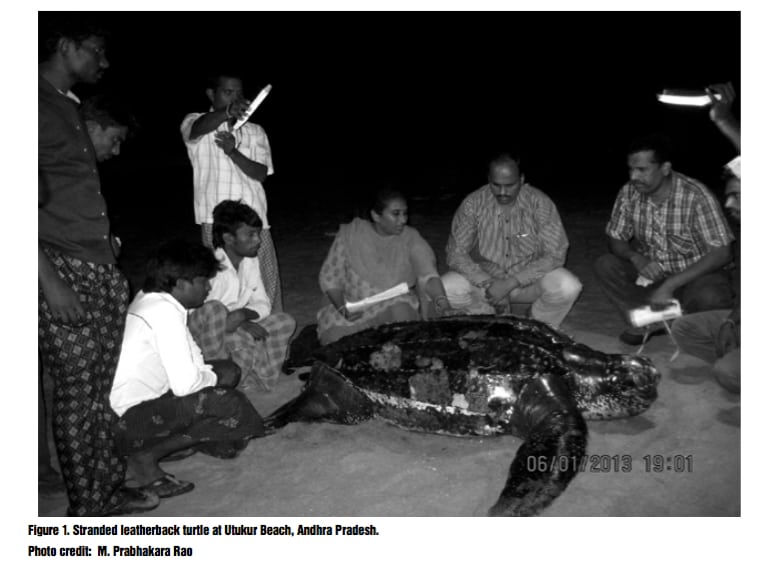 The District Forest Officer of Nellore, Andhra Pradesh, and the Assistant Conservator of Forests, Kavali Range came to the beach site and conducted a detailed enquiry with the local fishermen on the possible cause of the injuries to this turtle, and other injuries to all turtle species in the region. Most sea turtle mortalities in the area appear to be the result of fisheries interactions and there has been an alarming increase in turtle mortality along the Nellore coast, from 13 dead stranded turtles during the 2012 turtle nesting season (January to April) to 78 dead stranded turtles observed between 22nd December 2012 and 6th January 2013 alone. Concurrently, there has been an increase in the gill net fishery effort along the Paideru River estuary in the conservation area, with an increase from 34 to 54 boats operating in the area over the past 7 months.

The TREE Foundation’s community based sea turtle conservation program is partly supported by the Andhra Pradesh Forest Department and The US Fish & Wildlife Service, USA.

Stewart, K., C. Johnson & M. H. Godfrey. 2007. The minimum size of leatherbacks at reproductive maturity, with a review of sizes for nesting females from the Indian, Atlantic and Pacific Ocean basins. Herpetological Journal 17: 123-128.