SOLITARY NESTING AND MORTALITY OF OLIVE RIDLEY SEA TURTLES ALONG THE GANJAM COAST OF ODISHA, INDIA

The Odisha State has a coastline of 480 km, from which several rivers flow into the Bay of Bengal. Ganjam is the most southern district of Odisha, its 60km coastline extending from Prayagi to Patisonapur (Figure 1). Rushikulya, a well known arribada nesting site, is located north of the Rushikulya River mouth and close to the fishing villages of Purnabandha, Gokharkuda and Katigada (Bateswar). Olive ridley sea turtles have been observed to nest almost every year (Das and Kar, 1990; Pandav et al., 1994; Sankar et al., 2004; Tripathy 2008) since the discovery of this rookery (Pandav et al., 1994). Most turtle conservation work in the area has been restricted to the mass nesting events that occur on this 6km nesting beach; only one study has described the sporadic, solitary nesting that occurs along the adjacent beaches of the Ganjam coastline but no location was provided for any of the 180 nests (Pandav et al., 1994).

Of the nine beaches we surveyed, sporadic nesting occurred only at Gopalpur-Markundi and Markundi-Bahuda River Mouth. Bahuda River is the southern-most river in Odisha; Ramyapatana village is situated north of its mouth. About 14km north of Bahuda River mouth is another small rivulet mouth, behind which are Markundi and Gopalpur villages. To quantify the annual sporadic nesters and to conserve the ridley nests, hatchery management programs were initiated near Ramayapatana and Markundi Villages. At both sites a hatchery was established on a level beach devoid of vegetation. The hatchery area was cleared of plastic and metal refuse then fenced with bamboo poles to minimise the risk of predation. Within the hatchery, artificial nests, resembling the shape of the natural nests, were dug by hand to 50cm depth. Nests were spaced 1m apart. During the study period, nests were relocated into the hatchery to protect the nests from predators. Eggs were collected and buried in the artificial nests within 1-4hrs of oviposition. Each nest was marked with a small wooden stake; the stakes were serially numbered and the date and time of oviposition and clutch size was recorded.

The necks of individual nests were surrounded with a woven bamboo basket, open at both the ends, 1 week before expected emergence of hatchlings. The basket was buried 15cm below the sand surface to prevent escape and mixing of hatchling after their emergence from the nest. Hatchling were collected and released high on the beach between 5am and 7am.

Our study determined that sporadic nesting of olive ridley turtles occurred from January to April on Ganjam coast beaches between Gopalpur-Markundi (n=3) and Markundi-Bahuda River Mouth (n=195), in addition to the mass nesting ground of Rushikulaya (Figure 2). The highest density of nesting (> 4 nests/night) occurred during the first fortnight in April. We continued to monitor the beach until the end of May but there was no further sign of nesting turtles (Table 1). Temperature, weather conditions, geography of nesting beaches and the adjacent sea, conditions of tide, and surface current circulation influence nest site selection (Dash and Kar, 1990) and probably affected the olive ridleys selecting the Ganjam coast and other areas in Orissa. The average clutch size for 195 nests at Ramayapatana hatchery during the study period was 139.7±15.9 eggs (range= 96-168), and the average incubation period was 58.9±1.3 days (range= 53-61). The average hatch success for the nests at Ramayapatana hatchery was 95.1±2.2% (range= 87.2-100.0) and emergence success was 87.3±2.4% (range= 79.1-92.3).

The Orissa olive ridley population has been subjected to high mortality in recent years; more than 10,000 dead turtles wash ashore each year after fishery related incidental mortality (Pandav and Choudhury, 2000). The present study documented 113 (54 male and 59 female) dead olive ridley turtles washed ashore during the study period of December 2013-April 2013 (Figure 3); two dead green turtles also washed ashore. Many turtle carcasses do not strand on the coast (only 7–14%; Epperly et al., 1996), so the actual number of turtles killed during the nesting season is likely to be much higher than numbers recorded on the beach. Seine netting is common in the coastal waters off Ganjam coast and may be a contributing factor to turtle mortality in the region. 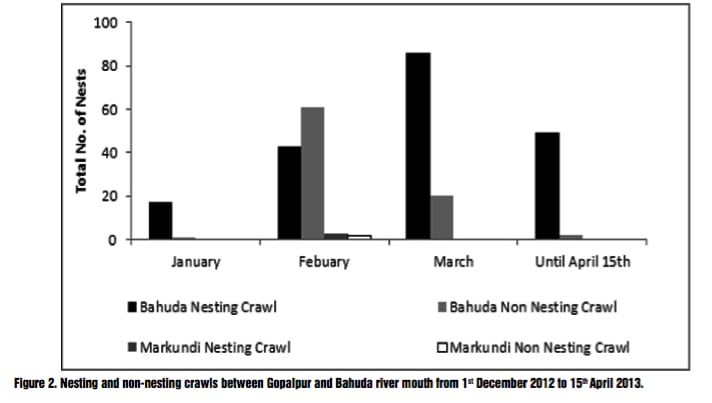 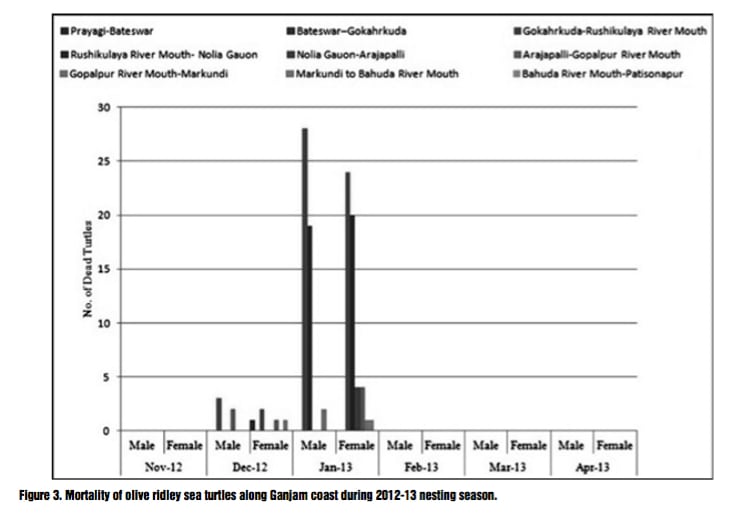 Solitary nesting of olive ridley sea turtles occurred on 21km of beach between Gopalpur to Bahuda River Mouth on the Ganjam coast of Odisah, adjacent to the mass nesting beach of Rushikulya. A greater number of nests were laid between Markundi and Bahuda River mouth (n=195) than Gopalpur to Markundi (n=3). No turtle crawls were observed between Rushikulya River mouth and Gopalpur. During the study period, 113 dead turtles were also observed, possibly as a result of interactions with fisheries.

Tripathy, B. 2008. An assessment of solitary and arribada nesting of olive ridley sea turtles (Lepidochelys olivacea) at the Rushikulya Rookery of Orissa, India. Asiatic Herpetological Research 11: 136-142.