A DEEP DIVING OLIVE RIDLEY IN THE BAY OF BENGAL

Sea turtles are known to dive fairly deep, but the deepest dives are generally attributed to leatherback turtles who have been recorded to depths of 1000m and below (Houghton et al., 2008). Not much is known about dive profiles of olive ridley turtles, but they have been recorded to dive to depths of about 150 to 200m on a regular basis (Whiting et al., 2007, Macmahon et al., 2007). A maximum depth of about 200m was recorded for olive ridley turtles in northern Australia (Macmahon et al., 2007), but typically, dives were between 10 and 20m during inter-nesting periods and 30 to 60m post- nesting (Hamel et al., 2008). In a study of sea turtles hooked in the Hawaiian long-line fishery, Polovina et al., (2003) reported that olive ridleys frequently dived to 150m and below, with one dive recorded at 254m. Swimmer et al. (2006) also reported dive depths of over 250m for olive ridleys caught on longlines.

There is limited information about dive depths of olive ridleys turtles in the northern Indian Ocean. Two post- nesting females from Masirah Island, Oman, in the northwestern Indian Ocean, displayed dives of <40m depths (Rees et al., 2012). These two animals remained in relatively shallow waters while being tracked, and thus their dive depths were constrained by their habitat. On January 20, 2013, a photograph was taken from a Remote Operating Vehicle in the Bay of Bengal, 40-50km offshore, south of Kakinada on the Andhra Pradesh coast (east coast of India) by Paul McCaffrey (Figure 1). The photograph was taken at a depth of 225m. The information reached us via Meghan Koperski of the Florida Fish and Wildlife Conservation Commission. This record adds to our knowledge of the poorly understood dive behaviour of the olive ridley turtle, and is the deepest dives recorded, to date, for the species in the Northern Indian Ocean. 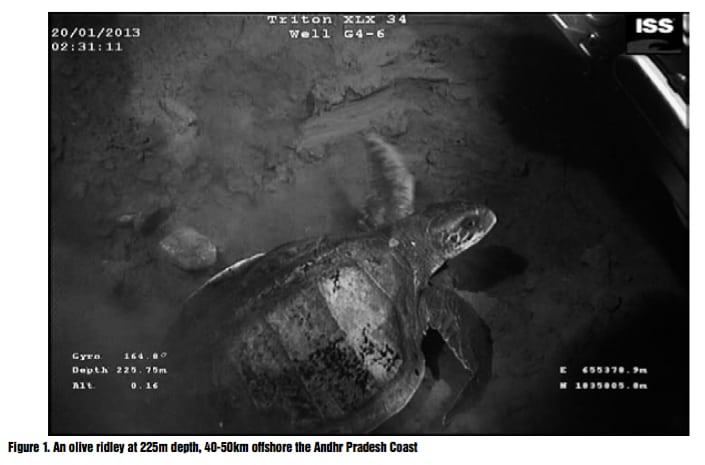