On August9th and 10th 2013, the first Seychelles Sea Turtle Festival was held on the island of Mahe. Global Vision International and the Marine Conservation Society Seychelles organised the festival, with support from the Seychelles Ministry of Environment, to celebrate the Seychelles marine turtle population and raise awareness of issues surrounding their conservation.

There are five species of marine turtle found in Seychelles waters, however it is only the hawksbill turtle (Eretmochelys imbricata) and the green turtle (Chelonia mydas) that nest on Seychelles’ shores. They are listed as ‘critically endangered’ and ‘endangered’ on the IUCN Red List respectively. The Seychelles hawksbill population is the largest remaining within the Indian Ocean, and is one of only five populations worldwide that still have more than one thousand females nesting annually.

Within the Seychelles there is a long tradition of harvesting marine turtles, and green turtles remained an important food source up until the mid 1990s. In addition to their meat, the glutinous layer known as ‘Calipee’, found beneath the lower shell of the animal, was considered a delicacy. Though the prevalence of biotoxins within the flesh meant hawksbills were never a preferred food choice, the animals were not spared as their shells were highly prized within the local and illegal international markets where they were made into jewelry and ornaments.

Although the economic value placed on turtles created a lucrative market for their products, the Seychelles has a commitment to conservation. Since 1994, sea turtles have been afforded full protection under Seychelles law, and it is illegal to kill, possess or eat turtle meat. Though small scale poaching does still occur, the main threats to local turtle populations today include coastal development, pollution, and entanglement in longlines and fishing nets.

The Seychelles Sea Turtle Festival was an opportunity to unite different organisations that have turtle monitoring programs and to raise awareness of the issues surrounding turtle conservation. In total eight national organizations and one international organization (GVI) participated in the event. On August 9th 2013 the opening ceremony of the festival tookplaceattheMinistryofEducation.Theceremony was opened by the Director General for Schools and was followed by a song entitled ‘The Turtles in the Sea’ performed by La Rosiere primary school.

During the course of the afternoon, prizes were awarded to the winners of the turtle themed artwork competition, which had been run throughout all schools in the Seychelles during the previous two months. Approximately 50% of schools in the Seychelles entered the competition, with over 150 primary and secondary school students providing turtle themed artwork. The festival provided an opportunity to discuss and share information on turtle conservation within the Seychelles and to reach the next generation of budding conservationists. Mr Chris Boyes from the Save Our Seas Foundation (Figure 1), Miss Gilberte Gendron from the Seychelles National Parks Authority and world-renowned turtle expert DrJeanneMortimerdeliveredpresentationsonturtle biology and conservation. The afternoon culminated in an animated puppet show created by the students of the Academy by the Sea and a closing speech by the Minister for Tourism and Culture, Mr Alain St Ange. On Saturday August 10th 2013, a viewing of the documentary film ‘Turtle: the Incredible Journey’ was held at the local cinema, with entry free to children under the age of sixteen. The film was followed by a ‘Family Fun Day’ adjacent to the beach area in Beau Vallon. Several NGOs and government departments provided information on turtle monitoring programmes being conducted throughout the Seychelles, including the Seychelles Islands Foundation (SIF) who are tagging green turtles on the UNESCO world heritage site of Aldabra, GVI, SNPA whose hawksbill nesting monitoring programme runs within the Curieuse Island National Park, and MCSS who monitor the beaches of south Mahe. Many of the organizations hosted interactive displays and ran turtle based activities aimed at educating people of all ages in turtle conservation. In addition to GVI, MCSS and SIF, the other participating conservation organisations (in no particular order) were the, Save Our Seas Foundation, Island Conservation Society, Seychelles National Parks Authority, Ministry of Environment, WiseOceans, and TAGS. 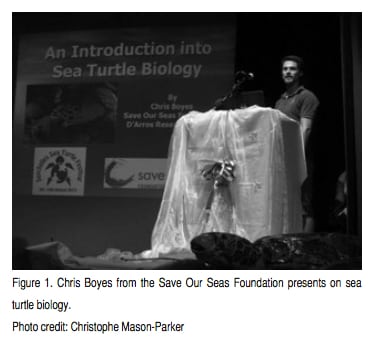 Aside from the message of education, the day was all about having fun and there were plenty of activities to keep everyone entertained (Figures 2-3). Local DJs provided music while dozens of street vendors offered refreshments throughout the day. For the kids there was face painting and arts and crafts, as well as a sandcastle competition. There was also the opportunity to try snorkeling and experience the marine environment first hand. 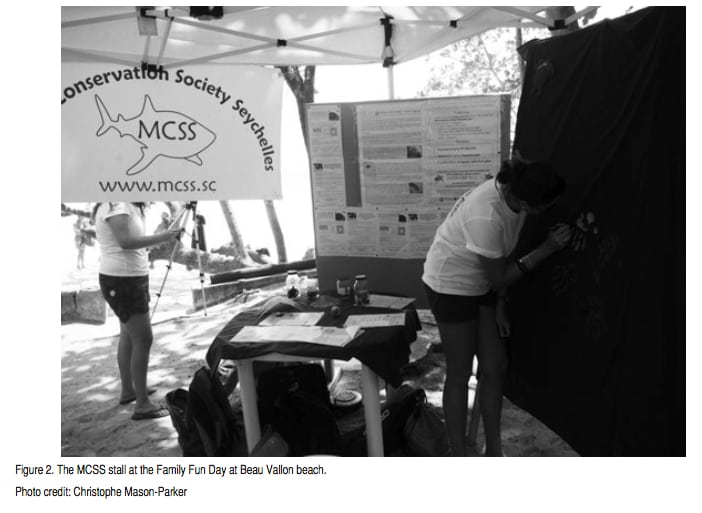 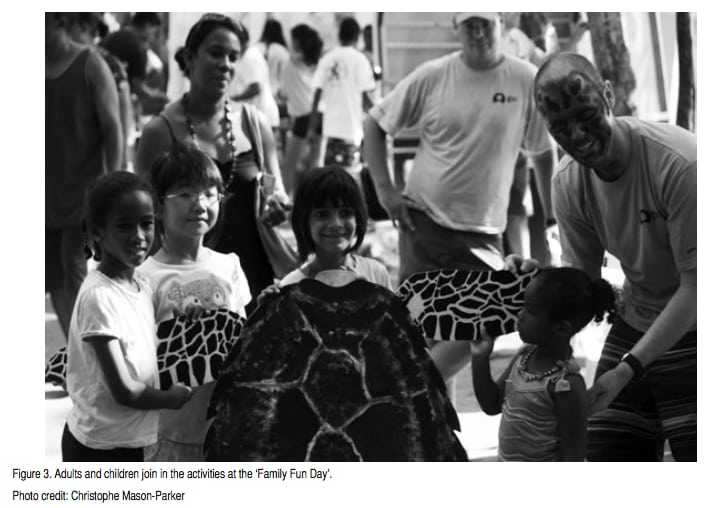 The first Seychelles Sea Turtle Festival was a great success in bringing together people from all backgrounds and ages. The festival received a significant amount of media coverage from both newspapers and local television and was well received by all those who attended. In total over the two days it is estimated that around one thousand people attended the event, while many more followed the activities though different social media outlets. As the festival was held in Beau Vallon, the main tourist area of Mahe Island, it attracted a good mix of local residents and international tourists.

The event would not have been possible without the assistance of the Ministry of Environment, the Ministry of Education, the support of the Seychelles Tourism Board, and the generosity of all the sponsors.

As we enter the start of the Hawksbill nesting season it is hoped that there will be a new awareness regarding the obstacles that face marine turtles and a heightened sense of pride in the Seychelles close association with these amazing creatures. 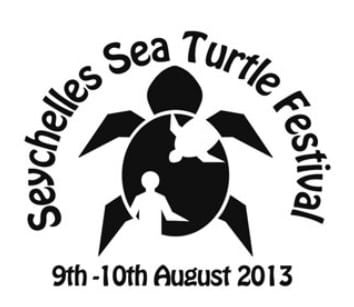