A PILOT STUDY OF THE INTERACTIONS BETWEEN MARINE TURTLES AND THE ARTISANAL GILL NET FISHERY IN TEMEKE DISTRICT, TANZANIA

Strategies to mitigate marine turtle bycatch are impeded by many factors, including a lack of reliable information on the spatial-temporal distribution of fishing effort affecting marine turtles at different life history stages, and the numbers of turtles at risk of bycatch in different fisheries (Muir & Ngatunga, 2007). Availability of reliable data is particularly problematic for artisanal fisheries in developing countries where basic data for the number of fishers, types of gear used and species of marine turtles captured are often unreliable, unavailable, or not collected. With artisanal fisheries comprising >95% of the world’s fishers, this knowledge gap presents a major challenge to threatened species conservation and sustainable fisheries initiatives (Moore et al., 2010).

In Tanzania, marine fisheries are dominated by open access artisanal fisheries in near shore waters, using simple gear types to target multiple species, and the distinction between target and bycatch species is vague (Groenveld et al., 2014). As a result, there is very little documentation on the levels and types of bycatch in these fisheries, especially those that use passive gear such as gill nets (Davies, 2009).

It is generally accepted that the most accurate method to quantify bycatch rates involves using independent observers on board fishing vessels to record information on per-vessel fishing effort, target catch and bycatch (Moore et al., 2010). However, in developing countries this methodology is often cost prohibitive. More inexpensive survey techniques such as interviews with fishers, which can be implemented rapidly and at low cost, are considered ideal in areas where there is little or no information (Aragones et al., 1997).

In 2007, Tanzania participated in a large pilot study of a rapid bycatch assessment protocol to gather basic information about fisheries and affected non-target taxa (Moore et al., 2010). The study used interview surveys with fishermen to collect comparable information on artisanal fisheries effort, gear use, and bycatch of vulnerable taxa. In Tanzania, it was estimated that the annual incidental catch of marine turtles in the artisanal gill net fishery was between 617 and 6,170 individuals (Muir & Ngatunga, 2007).

The rapid bycatch assessment protocol has been used several times in Tanzania since 2007 (West & Matiku, 2010; Alavaisha, 2012). However, there are inherent limitations in the accuracy of human response data and independent validation is required to determine the reliability of responses and describe the link between true and reported bycatch information (Moore et al., 2010).

To investigate the relationship between true and reported bycatch data, a small pilot study of marine turtle bycatch was undertaken at a popular fishing ground in Temeke District in central Tanzania (Figure 1) using on board observers. Temeke District is subject to high fishing pressure due to its close proximity to markets in Dar es Salaam, the commercial capital of Tanzania with a population of more than 4.3 million people (2012 Population and Housing Census). Therefore, fisheries interactions are likely to be a major source of marine turtle mortality. During the 2007 bycatch survey, fishers interviewed in Temeke District reported that incidental capture of marine turtles was common. Stranding data also indicates that turtle-fisheries interactions are a frequent occurrence in Temeke District. Community turtle monitors recorded 1,015 strandings over a ten year period between 2004 and 2014 in Temeke District, with many carcasses showing evidence of net entanglement (Sea Sense, unpublished data). 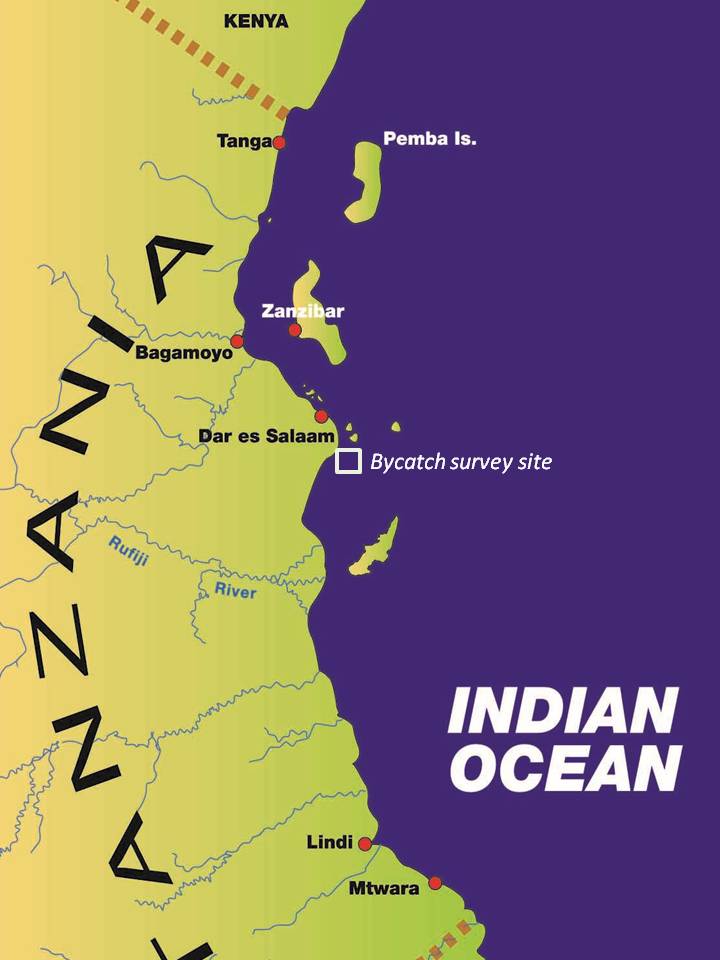 Observers were placed on two gill net boats, both departing from a fish landing site close to Minondo village(-6.9228, 39.4997) in Temeke District, Dar es Salaam. Nets were set at a reef known locally as Mindadi reef which is approximately 2.5km2 and situated 1.5km from the point of departure. Observers were on board for setting and hauling of every net over a period of six months between September 2014 and March 2015 (22 – 24 days per month in accordance with the Arabic calendar). Observers collected data on gear characteristics (net length, mesh size, setting position and soak time) and turtle bycatch (species, sex, carapace length and width and presence/absence of flipper-tags). Data were collected from a total of 152 gill net sets.

All gill nets were top set and had mesh sizes ranging from 5 – 9 inches. The mean soak time was 23.6 hours (SD ± 1.4). Turtles were captured in 43 of the gill net sets (28%). In total, 57 individual turtles were captured (green n=48; hawksbills n=9). Ten sets captured multiple turtles, including one set which captured five individuals. All of the captured turtles were juveniles except for one adult green turtle (female).

A third of the turtles (n=20) were dead when the nets were hauled. All individuals found alive were released by the observers.

Although the sample size was very small (only two boats), the bycatch study using on board observers has confirmed the presence of foraging populations of green and hawksbill turtles in near shore waters of Temeke District. Temeke District also supports one of the largest green turtle rookeries in Tanzania with an average of 102 nests (SD ± 28) laid there each year (Sea Sense, unpublished data). The bycatch study was conducted outside of the peak nesting season, so the frequency of interactions between gill net fishers and breeding adults remains unknown.

With a mean soak time of just under 24 hours, 152 gill net sets represents approximately 152 days of fishing. Therefore the level of marine turtle bycatch observed in this study is equivalent to a catch rate of 11 turtles per month. As a comparison, Young (2001) reported a bycatch rate of 50 turtles per year in the coastal gill net fishery in South Africa. The higher rate of bycatch observed in this study together with evidence from juvenile turtle strandings in Temeke District indicates that gill net bycatch poses a considerable threat to turtles within this segment of the population. Bycatch data derived from the observers were not used to estimate the annual take in the whole area because the vessels with on board observers covered only one fishing ground, and the rate of bycatch is likely to vary between areas depending on the level of fishing pressure.

Data generated by this study provided a useful comparison with estimated rates of bycatch obtained from interviews with fishers. The study using on board observers suggests that data produced by interview surveys underestimates the rate of marine turtle bycatch. Interview surveys conducted in Tanzania in 2007, 2010 and 2012 indicated that gill net fishers caught an average of 1-10 turtles per year. In contrast, 10 of the gill net sets in this study captured multiple turtles over a period of just six months, including one set which captured five individuals. The inconsistency in bycatch rates may be caused by fishers either having a poor memory for bycatch rates or untruthful answers may have been provided. During the bycatch survey in Pangani District in 2010, outside of the formal interview setting, fishers admitted to catching 1-4 turtles per month (West & Matiku, 2010).

The true impact of bycatch on the population can only be assessed effectively if post-release mortality is known (Álvarez de Quevedo et al., 2010). All of the turtles captured during this study were released in the presence of the observers. The probability of survival of the captured turtles is unknown and may depend on the length of time the turtles were captured in the net and the fitness of each individual. In Tanzania, live turtles are rarely released from fishing nets and are instead slaughtered for consumption (West, 2010). In this context, data generated by bycatch studies can be used to identify communities that interact frequently with marine turtles to ensure they are targeted for bycatch education and awareness activities including sensitization on national laws and regulations prohibiting the trade and consumption of turtle meat.

Although none of the captured turtles were flipper tagged, international flipper tags recovered in Tanzania between 2004 and 2014 show that the central Tanzanian coast is a migratory corridor and foraging ground for green turtles originating from regionally important nesting sites in Seychelles, Comoros and Mayotte (West et al., 2014). Therefore, the impact of bycatch in the artisanal gill net fishery in central Tanzania is likely to extend beyond juvenile populations and may constitute a considerable threat to marine turtles in the WIO region.

Although there is a paucity of published data on the true extent of marine turtle bycatch across the WIO region, coastal fisheries (mainly gill nets) have been identified as the single biggest threat to marine turtles, dugongs and cetaceans in the region (Bourjea et al., 2008). Wallace et al.( 2010) state that large data gaps on marine turtle bycatch in gill net fisheries across the WIO region represent urgent research priorities. Marine turtle research and conservation efforts in Temeke District and indeed within Tanzania focus almost exclusively on the protection of nesting females but little is known about the extent of in-water threats to marine turtles at other life history stages.
In view of these observations and the unexpected high level of bycatch observed in this pilot study, it is recommended that the study be expanded to increase the sample size of boats and to include comprehensive observer coverage at other locations and at varying times of the year in order to build a true picture of the extent of marine turtle bycatch in Tanzania. Access to data on bycatch rates across fisheries is essential for highlighting conservation priorities (Wallace et al. 2010).

Álvarez de Quevedo, I., L. Cardona, A. De Haro, E. Pubill, & A. Aguilar. 2010. Sources of bycatch of loggerhead sea turtles in the western Mediterranean other than drifting longlines. – ICES Journal of Marine Science, 67: 677–685.

Young, N. 2001. An analysis of the trends in by-catch of turtle species, angelsharks and batoid species in the protective gillnets of KwaZulu-Natal, South Africa. Unpublished MSc thesis, University of Reading. 101pp.