SUMMARY FINDINGS FROM TED TRIALS OFF PAKISTAN COAST IN 2014

Five species of sea turtle, green turtles (Chelonia mydas), olive ridley turtles (Lepidochelys olivacea), hawksbill turtles (Eretmochelys imbricata), loggerhead turtles (Caretta caretta), and leatherback turtles (Dermochelys coriacea), have been reported from coastal areas of Pakistan (see Zaheer et al., 2010). Given the overlap between turtle habitats and those of fishing operations, a large number of turtles are caught in trawl nets used for shrimp fishing in the coastal waters of Pakistan. IUCN Pakistan, under the USAID Ambassador Fund Small Grant Project ‘Saving the Endangered Sea Turtles on the Coast of Pakistan’ and in collaboration with Marine Fisheries Department, Government of Pakistan, has encouraged the use of turtle excluder devices (TEDs) in trawl nets through awareness raising and capacity building of fishers, and distribution of TEDs for installation in their trawl nets during fishing operations. As a part of this initiative, sea trials were conducted under the project to monitor performance of installed TEDs.

The sea trial TED monitoring programme was designed and conducted from 01-17 November 2014. A comprehensive TED Observer Data Sheet was designed by Dr. Nicolas Pilcher for monitoring of catch of target and non-target species in each trawl fishery. The data sheet included questions about duration of trawl, trawl pattern, GPS location, types of target and bycatch species, and condition of bycatch species at the time of release. An Urdu translation of the data sheet was then prepared to facilitate better understanding by the local implementation team. A colored pictorial turtle species identification guide was given to the each observer to enable identification of the turtle species encountered during the trial.

Based on the GPS location recorded during the sea trials, GIS based maps were created to mark the location of trawling. GPS locations of trawl interactions with marine animals were superimposed on the GIS map. This was possible as a result of a separate baseline study (Pilcher et al., 2015) on sea turtle mortality in fishing operations based on interviews with trawl fishermen. It was thus possible to correlate the findings of both the TED trial monitoring and baseline study. A GIS expert at IUCN provided technical support in transcribing field data on to GIS based maps.

Data analysis followed standard protocols for assessing differences in catches, including a determination of any significant differences in tow characteristics (to eliminate tow-related bias) such as time of deployment, water depth during deployment, and duration of tows. Analyses also included a description of total tow times both with and without TEDs, proportion and representativeness of tows with TEDs, values of catches, and numbers of turtles caught in trawl activities.

The eight captures equated to 0.05 sea turtle captures per hour, which translates to one sea turtle caught every 23hours of fishing per boat. To determine overall fishery mortality, bycatch rates could be multiplied by the total amount of fishing effort with shrimp trawls.

The bycatch frequency was calculated to be 0.13 turtles per trawl deployment, with fishing boats deploying their nets multiple times in one day.

The average duration of trawl tows while using a TED was 2.43 hours, while the average tow time when not using a TED was 2.63 hours. There was no significant difference between tow times amongst vessels and whether using TEDs or not (ANOVA1,86F=5.619, p=0.966).The average depth at which fishing boats operated did not vary substantially; boats equipped with TEDs fished in waters that averaged 14.7m while boats without TEDs fished in waters averaging 14.5m (ANOVA1,86F=5.558, p=0.544).

However, there were significant problems with revenue and losses when fishers use TEDs. There was a significant difference (ANOVA1,122F=5.698, p=0.019) in fish-related income, with TED-equipped boats landing an average of approximately half of what non-TED-quipped boats did, at only 3,246 PKR per TED haul compared to 8,080PKR from non-TED tows. Similarly, there was a significant (ANOVA1,122F=31.508, p=0.0001) reduction in revenue from shrimp catches, with TED boats landing an average of only 9489 PKR per haul compared to 20508 PKR per haul from non-TED boats. It is likely that the difference results from the way in which the TEDs are used rather than the TED designs themselves, but further trials and refinements will be needed before these can be marketed widely across fishing communities.

There is insufficient data from the spatial analysis component of the trawling survey (Figure 1) to be able to determine if there are any fishery hotspots, and at present it appears that fishing is spread relatively evenly across the coast with a concentration in Sindh Province. However, superimposition of GIS locations of sea trial monitoring on the baseline study map (Figure 2) shows the overlap of sea turtle concentrations and some coinciding with fishing areas. 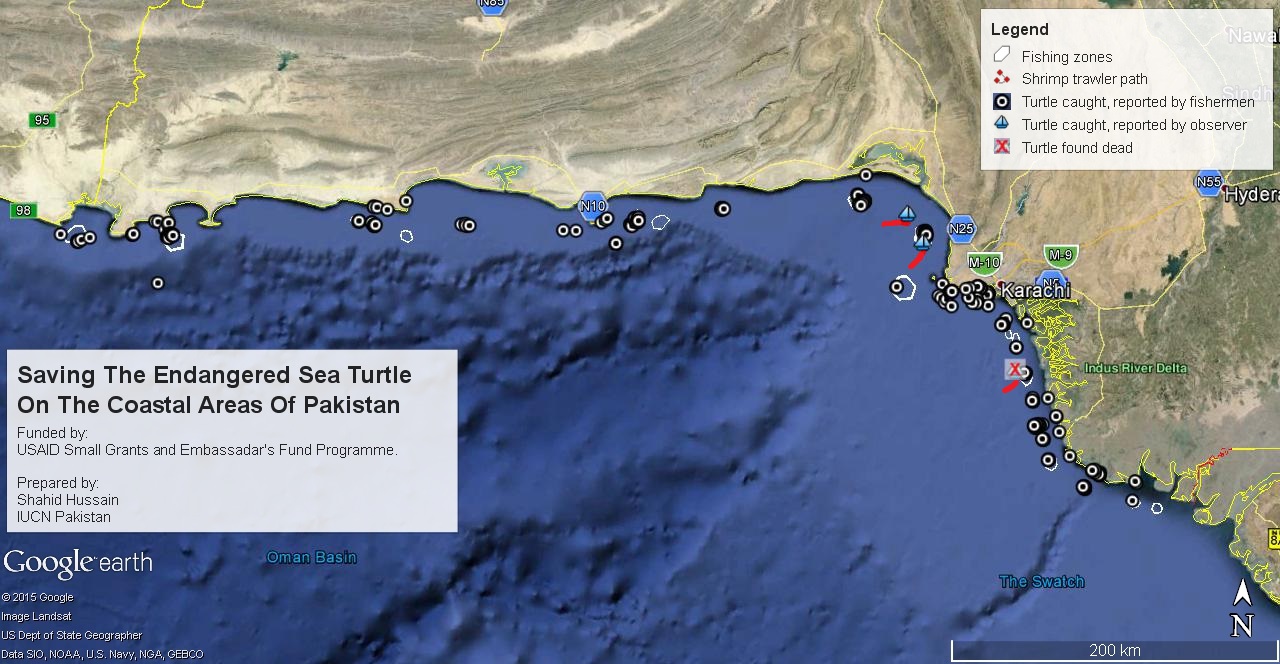 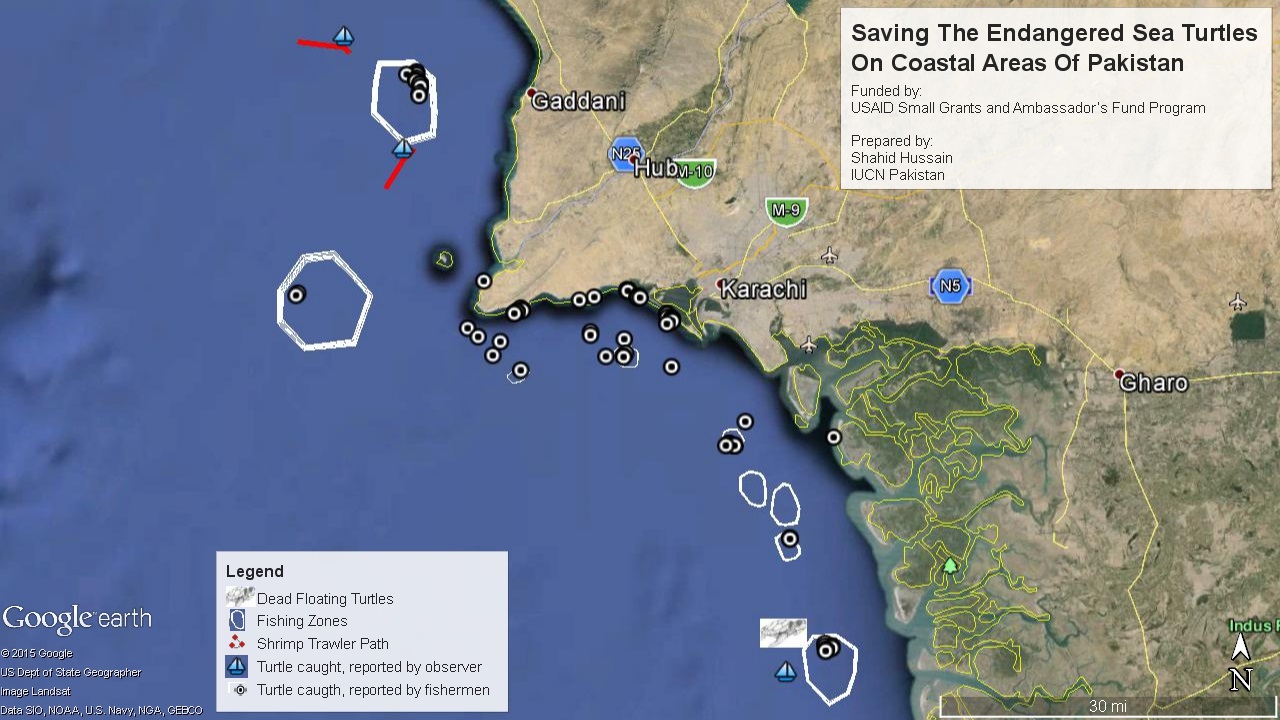 Figure 2: Locations of sea turtles caught in trawls during sea trials in Pakistan.

The findings of our TED sea trial monitoring reveal that there is an overlap of shrimp fishery areas and sea turtle occurrence. The TED Observer Programme confirmed that sea turtles were being taken in the trawl fishery in offshore waters of Pakistan, as eight turtles were caught in trawl nets when the boats were not using TEDs. This equates to 0.05 sea turtle captures per hour, which translates to one sea turtle caught every 23 hours of fishing per boat. The findings of this sea trial monitoring is in concurrence with the findings of a separately conducted baseline study on mortality of sea turtles in fishing operations (Pilcher et al., 2015), which also indicates that there is a significant bycatch problem with the shrimp fishery in Pakistan that need to be addressed.

The baseline study revealed that a large proportion (87%) of fishers reporting catching turtles accidentally in their nets in the past year. Based on collected responses from fishermen, and extrapolation of the data to the entire operational fishing fleet of 551 vessels operating out of Karachi Harbour, the extent of the fishery-wide potential bycatch of sea turtles ranges from 1817 to 2381 turtles in just the last year. These figures indicate high rates of mortality of sea turtles due to interactions with trawlers in Pakistan.

The findings of the TED sea trial monitoring and the baseline study suggest the need for a diverse programme of trials and demonstrations, along with the development of a technical TED team in the Marine Fisheries Department, to reintroduce TED use among fishers. This should lead to a significant reduction in sea turtle mortalities in Pakistan.