Sea turtles that nest along the Indian coast face many threats during their breeding, nesting and foraging due to lack of awareness and enforcement of regulations designed to protect the species. A considerable number of turtles entangled in fishing gear have their flippers intentionally or accidentally amputated by fishermen and are unable to swim, feed or fend for themselves. They are at the mercy of ocean currents which carry them to various locations along the coastline where they then strand.

The TREE Foundation Rescue and Rehabilitation Centre was established in 2010 and runs in association with the Wildlife Wing of the Forest Department (Chennai, Tamil Nadu). The centre receives many calls about injured and stranded turtles. After noting down basic details, such as a brief description of the turtle, obvious external injuries, general condition of the turtle, and approximate location, the Foundation’s stranding team attends the scene as soon as is possible, usually within one hour. Sometimes it is possible to treat the injury on site and release the turtle at the location, however the turtles often have to be brought to the Centre for rehabilitation due to the nature and seriousness of its injuries, such as a recently amputated flipper or a carapace or skull injury. Rehabilitation takes place with the help of 15 part time and five full time trained Sea Turtle Protection Force members and volunteers under the direct supervision of Dr. Supraja Dharini and veterinarians as per requirements. Since 2010, TREE Foundation has rehabilitated 35 turtles and nursed back to health and successfully released 11 olive ridley sea turtles, two green sea turtles, and two hawksbill sea turtles (Table 1). A few critically injured turtles succumb to their injuries soon after being brought to the centre. As of March 2015, there were 11 turtles undergoing rehabilitation at the Centre.

December 2014 to April 2015 saw a small reduction in sea turtle strandings, with 975 dead turtles washing ashore and 20 injured stranded turtles reported to the Foundation. This is still a very large number of strandings compared to the average number per year. In 2013, there were 235 strandings from January to April. The beginning of 2014 was a tragic time for sea turtles and by March 2014 there were 1906 turtles stranded along TREE Foundations project areas in Nellore and Kanchipuram on the south east coast of India. Most of the strandings were believed to be of turtles that had drowned in fishing gear.

TREE Foundation protects between 340-380 nests each year along the Kanchipuram coast, but buries more than 400 turtles that have died due to interactions with fisheries gear. On February 22nd 2014, more than 820 dead turtles were found on the coast of Nellore due to trawl fishers operating in violation of the 8km from shore fishing regulation as set out in the Marine Fisheries Regulations Act. Yet another mass stranding event was observed in March 2014 at the Vellar Estuary, Tamil Nadu. Through interactive discussions with artisanal and trawl fishermen we are encouraging the fishermen to check their nets at least every 30 minutes to ensure no turtle has become entangled. If they do find a turtle they are requested to release it, without causing it any injury, as soon as possible to avoid its drowning. TREE Foundation has applied ‘How to Safely Release a Sea Turtle’ stickers to over 3000 boats, however, many fishermen do not follow the guidelines despite having agreed to do so previously. If Turtle Excluder Devices are implemented in this region then future sea turtle deaths could be reduced. TREE Foundation conducted a TED workshop for trawl fishers in January 2015, followed by sea trials of TEDs on 12 boats. The trawl fishers were happy with the outcome of the trials and there is a very real chance that they will voluntarily implement TEDs in the future.

The introduction of TEDs is important as TREE Foundation data for the states of Tamil Nadu, Andhra Pradesh and Odisha over the past 13 years indicates the number of dead adult turtles washing ashore is increasing (Figure 1). Fishermen have reported that in Chennai fishing harbour alone there are 200 gill net boats, and between 40 and 100 turtles of all size class and species are caught every day during the months of August through to May of the following year. The by-catch also includes other marine species, such as manta rays and sharks. The state Fisheries Departments have not yet taken steps to regulate fishing during the sea turtle breeding season, nor check new types of fishing gear for its by-catch rate before widespread introduction. We propose that there is an urgent need for on-board independent observers on at least 30 gill net fishing trips during the coming season, between September 2015 and March 2016, to confirm this anecdotal information in order to effect policy. TREE Foundation is working in close collaboration with the Fisheries Department, Forest Department, Coastal Security Group, and the Indian Coast Guard in order to find viable solutions to mitigate sea turtle mortality. The relevant enforcement agencies are equally concerned with the increasing mortality rate we have observed, and are increasing their efforts in the hope of reversing this trend through increased awareness, stricter enforcement of existing legislation and working in closer inter-agency partnerships. 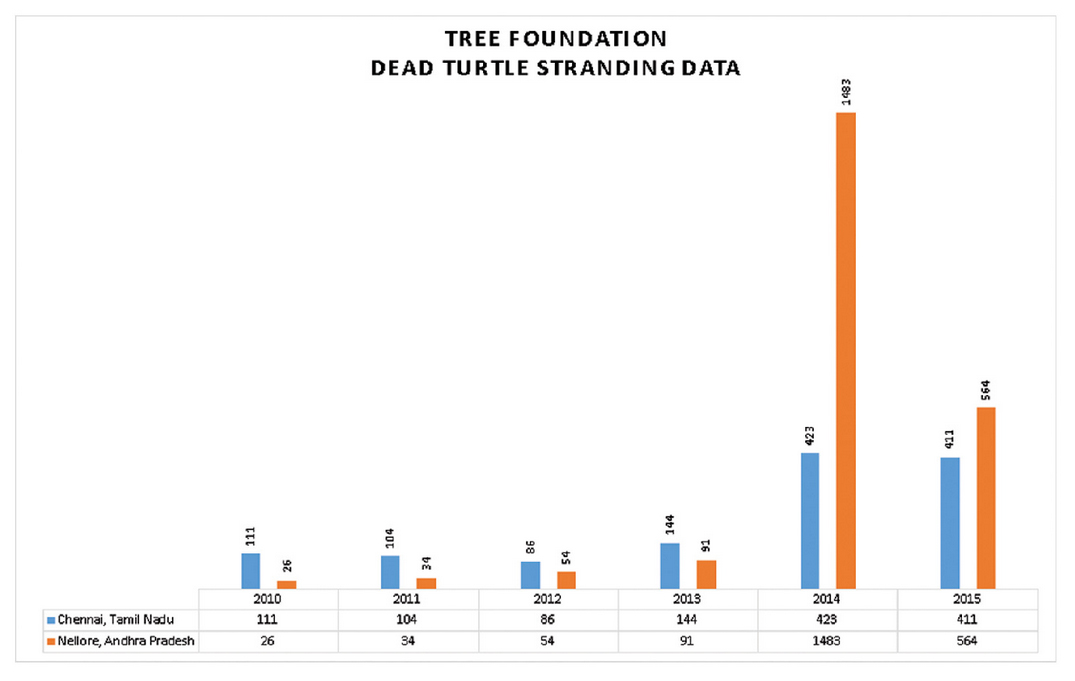