The leatherback sea turtle, Dermochelys coriacea, is rarely sighted in Indian waters and has few nesting records of on the mainland coast (Andrews et al., 2002). However, nesting of leatherback turtles does occur in the Andaman and Nicobar islands (Andrews et al., 2002), with Great Nicobar Island one of the three largest nesting grounds (Bhaskar, 1984; Andrews, 2000).

Galathea Bay in Great Nicobar Island (Figure 1) was an ideal nesting site for leatherback sea turtles prior to the 2004 Indian Ocean tsunami, with an increase in the number of nesting turtles every season. However, the nesting population was also under substantial pressure as a result of anthropogenic activities such as sand mining, bridge-port construction work, egg poaching and turtle meat consumption by indigenous peoples (Bhaskar, 1994; Namboothri et al., 2012; Tiwari, 2012) and natural predation of nests by wild pigs, monitor lizards, and stray and feral dogs (Bhaskar, 1994; Choudhary, 2006; Namboothri et al., 2012).

Galathea Bay (06° 49´ 05.99” N, 93° 51´ 16.65” E) on Great Nicobar Island is only accessible via a forest camp on the east coast. The Forest Department monitors sea turtle nesting on the east coast regularly and maintains a hatchery. The west coast is comparatively less or negligibly monitored as one has to cross the Galathea River, populated by saltwater crocodiles (Crocodylus porosus). Our study site was the uninhabited west coast, which has an expanse of 3.8km and the area characterized by sandy beach and dense beach vegetation.

The beach was surveyed each night from 18th to 20th February 2015 by two groups every half an hour during the incoming tide. After nesting activity was completed, sand samples (approximately 500g) were collected at a depth of around 10cm from the nest sites, packed in tight sealed polythene bags and transported for analysis. Samples were air-dried then sieved using five different mesh sieves (0.125mm, 0.25mm, 0.5mm, 1mm, 2mm). The sand temperature for each nest was recorded during the nesting activity using a PROBE thermometer at a depth of 25cm. Nest predation was described after direct and indirect sightings of predation during the survey period. 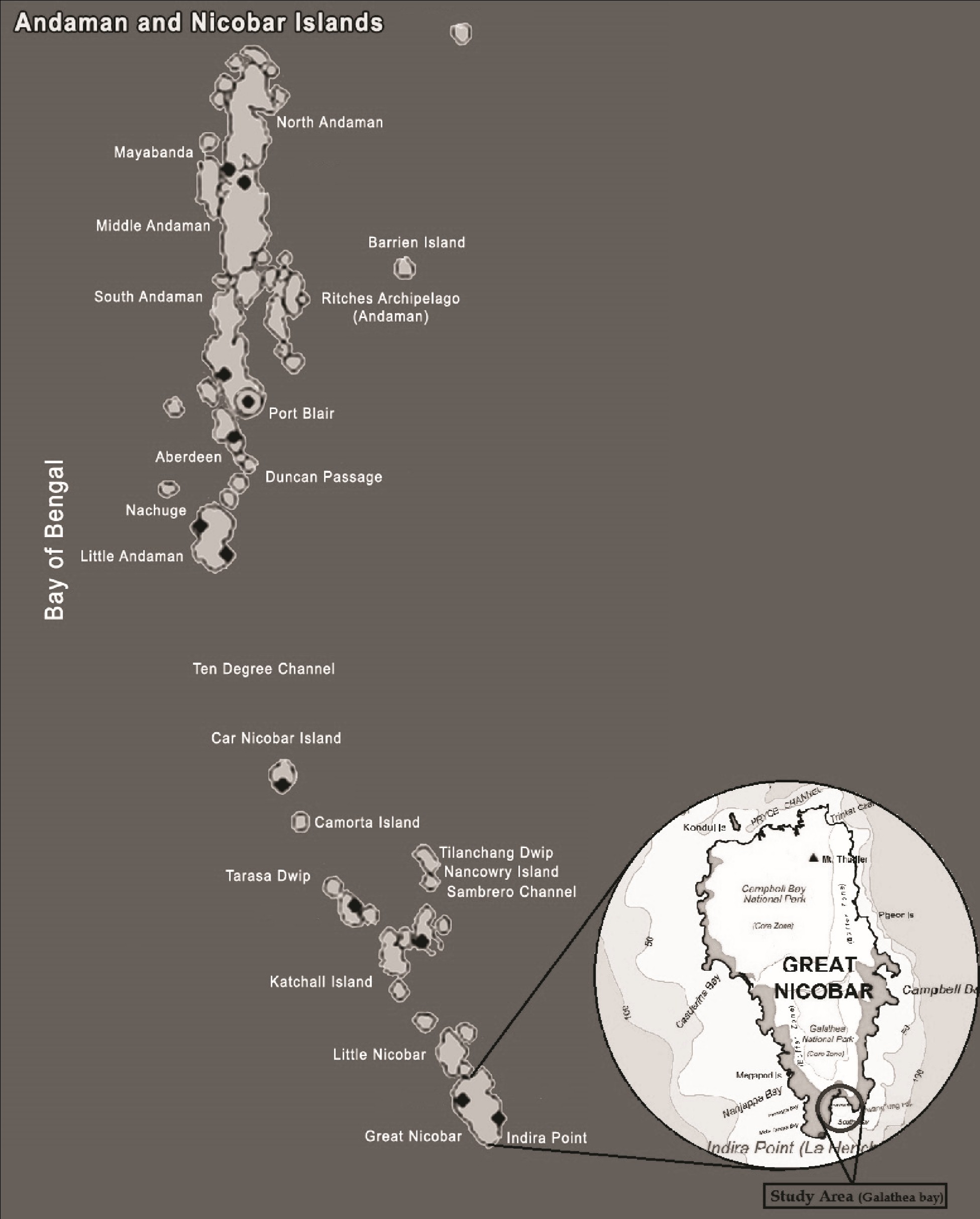 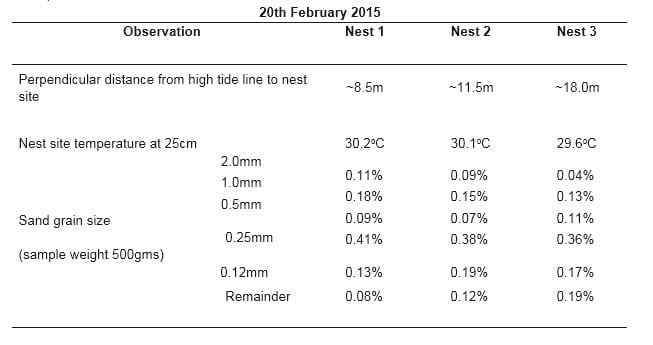 (Table 1) show general consistency among nests. We suggest two potential predators for turtle eggs from the Galathea Bay based on our observations and published literature. The most aggressive forager is likely the Nicobari pig (Sus scrofa nicobaricus), observed actively searching the beach and digging out turtle nests to eat the eggs as the female turtle returned to the water after nesting (pers.obs.). We also observed hermit crabs feeding on exposed eggs after pig depredation of nests.

The west coast of Galathea Bay, Great Nicobar Island, was previously a significant nesting site for leatherback turtles despite pressure from anthropogenic activities and natural predators. The nesting population has the potential to recover from disturbance resulting from the 2004 Indian Ocean tsunami, as human all settlements have gone and the region is, therefore, free of anthropogenic predation and light pollution which might affect nesting turtles. However, there is still predation of turtle nests by Nicobari pigs. Bhaskar (1994) also concluded that wild pigs were the chief predator of sea turtle eggs and hatchlings in this area, followed by the water monitor lizard (Varanus salvator), which was not sighted during the current survey. Predation by pigs may have increased since the tsunami, as human settlements may have deterred individual animals or controlled population numbers. A program to control pig numbers or protect turtle nests from pigs could help re-establish sea turtle populations at this site. There is no pre-tsunami substrate analysis from Galathea Bay with which to compare our results, but future substrate analysis may indicate changes as beaches re-stabilise.

We thank the director of BNHS, Mr. Asad Rahmani, for permission to conduct this survey and access to facilities; Forest Department of Andaman and Nicobar Islands, including APCCF Mr. Shukla, for his support and encouragement; Department of Forest of Great Nicobar Division for permission to explore the area, assistance during this reconnaissance, and information about the geographical area ; Dr. Kartik Shankar, Indian Institute of Science, for discussions about the status of sea turtle nesting at the site post tsunami; Forest Department staff Mr. Anand Prakash and Prem bhai who maneuvered us to Galathea; and, Forest Department staff Robert uncle and Kali bhai who transported us safely to the west coast of Galathea Bay.

Choudhury, B.C. 2006. Status of leatherback turtles in India. In: Assessment of the conservation status of the leatherback turtle in the Indian Ocean and SouthEast Asia. IOSEA Species Assessment: Volume I. Downloaded from https://www.ioseaturtles.org/content. php?page=Leatherback%20Assessment on 12 March 2016.

Hamann, M., C. Limpus, G. Hughes, J. Mortimer & N. Pilcher. 2006. Assessment of the conservation status of the leatherback turtle in the Indian Ocean and South East Asia, including consideration of the impacts of the December 2004 tsunami on turtles and turtle habitats. Downloaded from http://citeseerx.ist.psu.edu/viewdoc/ download?doi=10.1.1.471.3289&rep=rep1&type=pdf on 12 March 2016.