PRELIMINARY OBSERVATIONS OF MICROPLASTICS FROM BEACHES IN THE INDIAN OCEAN

Plastic is abundant and widely distributed throughout terrestrial and aquatic environments, and is now the main constituent of marine pollution. Sea turtles may be threatened by plastic pollution through ingestion, entanglement, degradation of key habitats including nesting beaches, and wider ecosystem effects (see Nelms et al. (2015) for a comprehensive review). Nelms et al. (2015) also recommend research priorities for each of these threats, among which are baseline surveys to establish the occurrence of plastic debris on nesting beaches and sand sampling to investigate plastic distribution and densities.

Plastic items of various types and sizes may accumulate on coastlines, including sea turtle nesting beaches (Ivar do Sul et al., 2011; Turra et al., 2014). Large plastic items may act as a barrier to nesting turtles or hatchlings and pose a risk of entanglement, but may be removed with continued, dedicated effort (as an example, see West et al. on pages 10-12 in this issue of IOTN). However, microplastics cannot be easily removed once in the environment (Cole et al., 2011) and may alter heat transfer and water movement in beaches. Changes in the thermal and hydric properties of a turtle nest have the potential to alter nest humidity and the likelihood of egg desiccation, incubation period, and hatchling sex ratio (reviewed by Carson et al., 2011). In addition, the nest substrate may become contaminated with persistent organic pollutants (POPs) absorbed by plastic articles or leached plasticisers (see Nelms et al. (2015)).

To investigate the potential for accumulation of microplastics on nesting beaches around the Indian Ocean to pose a threat to sea turtle nests in the region, we conducted a ‘snapshot study’ that would allow a rudimentary quantification of the density of microplastics and comparison among sites and previously published studies. It was anticipated that results of the study could then be used to inform design of a more detailed project, if warranted.

Beach sand samples were collected from nine countries located around the Indian Ocean: Australia, Bangladesh, India, Indonesia, Maldives, Myanmar, Pakistan, Sri Lanka and Tanzania (Figure 1). In the absence of a recognised international protocol for sample collection, sand was collected from 1m seaward of the high tide line at 0-1cm depth within a 20x20cm sq. Replicate samples were not collected due to the problem of transporting large volumes of sand between countries. The method for separating microplastics from the sand samples was modified from that of Thompson et al. (2004) and Claessens et al. (2011); 100g of sand from each sample was dried in an oven at 100ºC overnight, and three 25g sub-samples were used for further analysis. A concentrated saline solution (density of 1.2g/ml) was prepared by dissolving 357g NaCl in 1000ml of water at 25oC. The NaCl was visually checked before use, and showed no evidence of contamination with microplastics. 100ml of concentrated saline solution was added to each 25g dry sand sample before stirring using a magnetic stirrer for 2min. The slurry was allowed to settle for 1hr before vacuum filtration through GF/C Whatman filter paper with a pore size 1.2µm. The filter paper was then dried at 20ºC for 1hr before microplastics, considered to be fragments less than <1mm in this study, were identified and counted using a dissecting microscope. The mean number of microplastics in a 25g sample was calculated from the three replicates to obtain the density of microplastics.

Microfibers, but not plastic beads or granules, were found in samples from all countries (Table 1). The average number of fibers was lowest (3.3) in Australia and Myanmar and highest (13.0) in India. The weight of the microfibers per sample was negligible and could not be accurately established. 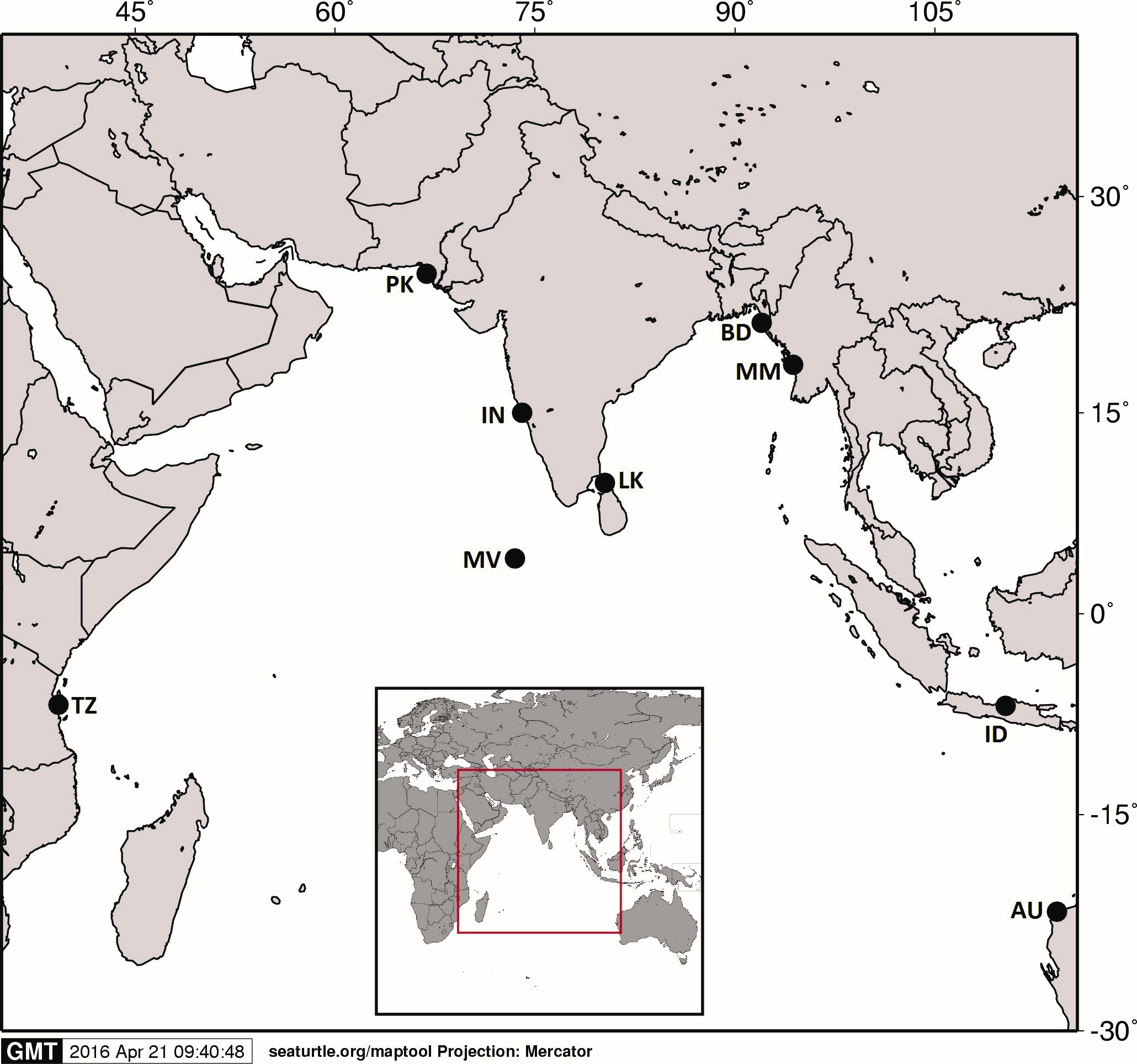 Microfibers, but not microplastics granules or fragments, were isolated from sand samples around the Indian Ocean. Woodall et al. (2014) also found a higher prevalence of microfibers than other microplastics in deep sediments and waters of the Indian Ocean, and concluded that particulates, mostly particles with larger volumes, may be transported from shallow coastal water to deeper seas by dense shelf water cascading (Canals et al., 2006; Ivanov et al., 2004), severe coastal storms (Sanchez-Vidal et al., 2012), offshore convection (Durrieu de Madron et al., 2013; Stabholz et al., 2013), and saline subduction (Talley, 2002). Hence, the reason for not finding microplastic granules or fragments could be that the deposition and suspension cycle of particles may transport microfibers to the coastal areas and other microplastics to deep sediments and oceans.

Microfibers are secondary microplastics, plastic particles derived from the breakdown of larger plastics due to physical, chemical, and biological processes (Cole et al., 2011; Stolte, 2014), and are most likely to have originated from treated or untreated domestic wastewater as more than 1,900 fibers can be released from clothes during a single wash (Browne, 2011). Fibers may also have originated from carpets and discarded and weathered polypropylene materials used in air filters, diapers and fishing materials (Naidoo et al., 2015). In the current study, the highest numbers of microfibers were isolated from samples collected in Bangladesh, India, Pakistan and Sri Lanka (Table 1); however, our snapshot study examined only one sample per location, so comparisons among countries should not be made prior to more extensive sampling. It is interesting to note that number of microfibers isolated from beaches around the Indian Ocean exceeded those of many studies worldwide (Table 2), and is likely to be an underestimation as microplasic density varies with depth and surface sediments do not hold the greatest number of plastics (Turra et al., 2014). High numbers of microplastics may influence hatch success and hatchling sex (Carson et al., 2011) but the potential effect of microplastics at the density recorded in this study, and other, has yet to be determined. 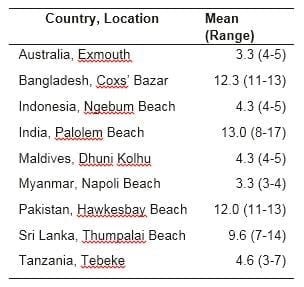 Table 2. Number of microfibers reported in studies worldwide. Numbers per sample weight were adjusted to the equivalent of 25g sand used in the current study. 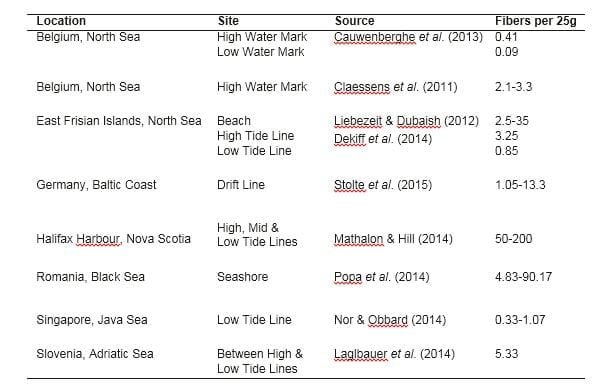 We would like to thank Chiara Fumagalli, Lindsey West, Martin Stelfox, Meresa G., Natalie Phillott, Pravinya B and Umair Shahid for collecting sand samples. Asian University for Women (AUW) provided financial support and facilities to conduct the study. The authors wish to acknowledge use of the Maptool program for analysis and graphics in this paper. Maptool is a product of seaturtle. org. (Information is available at www.seaturtle.org.)

Stolte A. 2014. The detection of microplastics in beach sediments [Master’s Thesis]. Rostock, Germany: University of Rostock.