THREATS TO OLIVE RIDLEY TURTLES ON THE SUNDARBANS COAST OF BANGLADESH

Marine turtles demonstrate continued population decline across their ranges due to an array of natural and anthropogenic threats. Threats are pervasive because turtles share multiple geographical localities and habitats (Márquez, 1990) and are often affected by both direct and indirect factors, including incidental capture in fishing nets, direct exploitation, or disturbance to nesting areas (Pandav et al., 1997). Consequently, marine turtle species are listed with different level of endangerment in the wild (IUCN, 2016).

Five species of marine turtles are recorded from the coastal waters of Bangladesh: the olive ridley, green, hawksbill, loggerhead and leatherback turtles (Ahmed et al., 1986). Coastal Bangladesh extends from the southeast Teknaf peninsula and adjacent St Martin’s Island to the southwest beaches of the Sundarbans. The largest nesting populations of all species, with the exception of loggerheads, which are not known to nest in Bangladesh, occur on St. Martins Island. Olive ridleys are the most abundant nesting species at this location (Islam, 2002) and are also reported to nest on the sandy south-face beaches of the Sundarbans in Bangladesh (Gani, 2000). However, research and conservation efforts have been mainly confined to St. Martin’s Island with little information available about populations in the Sundarbans islands.

The Sundarbans is the largest halophytic mangrove forest in the world, covering 10,000 km2 between Bangladesh and India. The forest includes a maze of rivers and creeks flowing from north to south into the Bay of Bengal, and human communities in north and east. Of the many isolated forest islands in the south of the Sundarbans, Dublar char (island) is home to thousands of artisanal fishers for six to eight months every year (Huda & Haque, 2001). Fishers employ a wide variety of gear, including gillnets (drift, large mesh, fixed, and bottom set), estuarine set bag nets, trammel nets, beach seines, push nets, drag nets, and different types of hand-operated gears and traps (Hoq, 2007).

A field survey from December 2015 to March 2016 for a tiger study allowed an opportunistic survey for sea turtles on several isolated beaches in the Sundurbans, from Mandarbaria in the west to Dimer char in the east (approximately 11km of coastline) (Figure 1). Beaches were examined for indications of turtle nesting, fishing activities on beaches and nearby coastal waters, remains of dead turtles, and beach erosion. Interviews with 14 fishermen in Dublar char fishing village were also conducted. 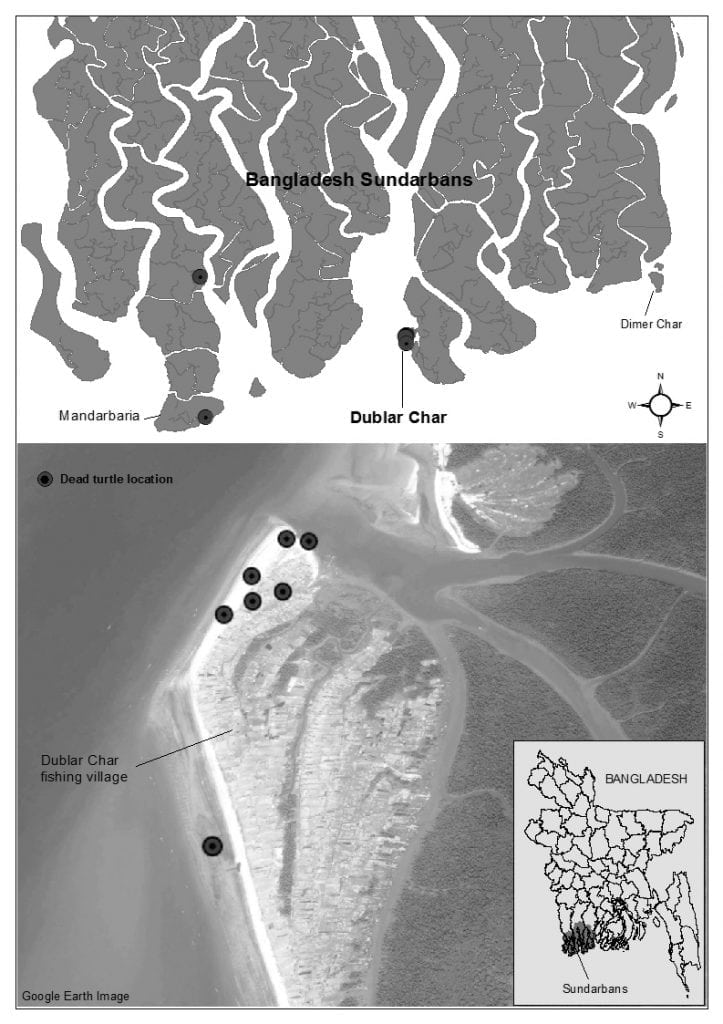 Figure 1.Study areas and locations of dead turtle on the Sundarbans coast.

No signs of sea turtle nesting on the islands surveyed were observed during our brief study. However, nine dead olive ridley turtles (Figure 1) were recorded, seven of which were within the Dublar char fishing village and included three freshly killed individuals and four older carapaces partially covered by sand. Two additional carapaces were observed in the forest and had been eaten by wild boar.

There were no indications of entanglement in nets around the neck and flippers of dead turtles, although this would have been difficult to observe on older carcasses. However, interviews with fishers indicated that all turtles died after entanglement in fishing nets and were carried back to the village by fishers with their catch then discarded. There was no indication that turtle meat was removed to be eaten before the carcasses were discarded. Other turtles were thrown into the sea for fear of detection by staff of the Forest Department (Marine turtles known to occur in Bangladesh are included in the Schedule I of the Bangladesh Wildlife (Protection & Security) Act 2012 (MoEF, 2012)). Such turtles are likely washed on to beaches across the Sundarbans.

The number of dead turtles observed during the 4-month survey suggests a need to more precisely quantify bycatch rates and mortality in the area during the fishing season (mainly from October to February). Although no butchered turtles were observed in this study, many communities, including those living in the Sundarbans, are known to consume turtle meat and trade turtle products (Islam, 2001), so it is also possible that live turtles, turtle meat or eggs may be traded to local markets in Khulna and elsewhere.

Disturbance of nesting turtles in the Sundurbans may also occur. Seine nets were prominent off beaches from December-March, which coincides with the turtle nesting season in Bangladesh from October to April (Islam et al., 2011), whilst activities such as fishing, anchoring, loading and unloading of fishing vessels, drying of fishes, and repairing fishing nets were common on the beaches of fishing communities such as that at Dublar char. Observations suggest that many beaches in Mandarbaria which were previously used for turtle nesting (Gani, 2000) are now exposed muddy banks potentially unsuitable for nests.

Long term ecological monitoring of marine turtle populations and their beach habitats across whole coastal waters of Bangladesh including Sundarbans is strongly recommended. Working with Dublar char fishermen to raise awareness about the ecological importance of turtles and introduce devices to reduce bycatch, such as LEDs (Ortiz et al., 2016), may help reduce the killing of marine turtles.

This survey was carried out during a large-scale tiger study in the Bangladesh Sundarbans that was supported by Panthera, WildTeam’s BAGH Project, and the Commonwealth Scholarship Commission of UK.