Velas (17.9588°N, 73.0361°E) is a tiny hamlet in the Mandangad taluka, Ratnagiri District of Maharashtra, India. Velas has an isolated 3km stretch of coast-line dotted by Casuarina trees facing the Arabian Sea. A small stream passes through the village to the beach surrounded by dense mangroves which flood in the rainy season.

The secluded, wide beach with offshore sand bars is suitable for olive ridley turtle nesting. The sea turtle breeding and nesting season in Maharashtra lasts from November to April. In Velas, nesting usually occurs from December to the first week of April and accounts for 40% of the nesting in Maharashtra.

SNM AND THE TURTLE FESTIVAL

Sahyadri Nisarga Mitra (SNM), a non-governmental organization, initiated marine turtle conservation along the coast of Maharashtra with the involvement of the local community. Its first onsite olive ridley conservation efforts were carried out in 2002 at Velas (Katdare & Mone, 2003)and now encompasses 36 beaches and 12 villages of Ratnagiri district.

The Turtle Festival was first organised by SNM in 2006 and has occurred every year since then. Local villagers joined the initiative in 2006 which led to the formation of Kasav Mitra Mandal (KMM), a local club of individuals supporting the conservation in Velas. At present, the local governing body i.e. the Grampanchayat along with KMM the Forest Department, Joint Forest Management Committee (JFM) and Biodiversity Management Committee (BMC) work together for the conservation programme “The Turtle Festival”.

The members of KMM provide homestay arrangements for visitors to the Turtle Festival. Nineteen families initially extended their traditional hospitality wherein they serve home-cooked Maharashtrian style food to the visiting tourists. However, the number has increased to 31 in recent times and the number is expected to increase to 34 in the next year or so. Members of the KMM contribute 10% of the total income to the SNM turtle conservation programme.

One of the major fundamental activities during the Turtle Festival is to check the local hatchery and release emerged hatchlings into the sea. The volunteers of KMM check for hatchlings at 7am and 6pm and new hatchlings are released for tourists to observe. Other activities KMM hosts during the festival are visits to a variety of birdwatching sites in and around Velas via a bullock cart safari. They also project a screening on turtle conservation during the festival followed by an interactive session with Mr Mohan Upadhye.

The Turtle Festival is a purely a conservation effort by the local community. The primary goal of the effort is to protect the olive ridley eggs from predation and other natural threats to their survival. The Turtle Festival also focuses on the active participation of the local community and visiting tourists in conservation of sea turtles and to increase the livelihood sources of local villagers

SNM volunteers patrol the beach throughout day and night during the nesting season to locate newly laid nests and supervise nests in the hatchery. A hatchery of 8 m x 3m (Katdare & Mone, 2003) is established at Velas, and all the nests laid on its 3km beach are collected and placed in hand-dug egg chambers to protect them from tidal erosion and predators. A galvanised iron mesh fixed to wooden poles fencing surrounds the hatchery to prevent depredation of nests. Wooden batons are numbered to identify individual nests, which are covered with a wicker basket and a piece of jute to reduce predation of hatchlings by birds.

In the 2002/03 nesting season when the conservation programme began at Velas, SNM relocated the 50 olive ridley turtle nests laid on the beach to the hatchery (Figure 1). The number of nests has fluctuated since, with a low of 8 in 2014/15. As female olive ridley turtles reach maturity at about 13 years ranging from 10 to 18 years (Zug et al, 2006), SNM hopes that nesting numbers will soon reflect the conservation effort of the past years. The trend of number of eggs produced (Figure 2) follows that of number of nests laid. Emergence success also fluctuates over time, with a high of 64% in 2015/16 and low of 30% in 2006/07. 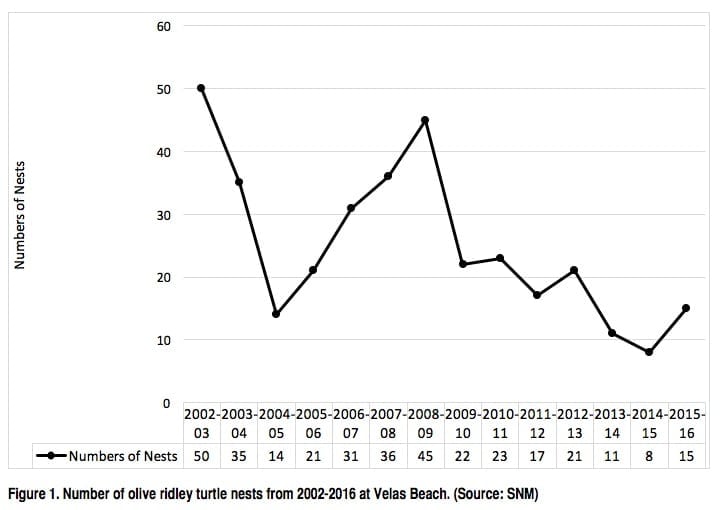 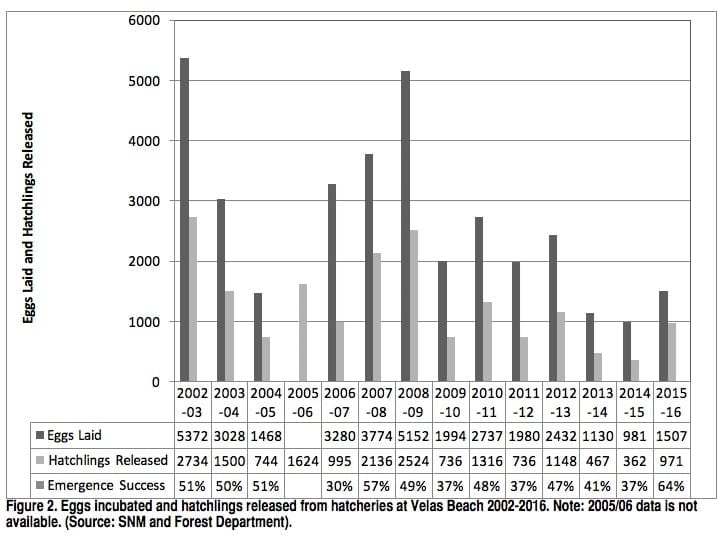 Restricted facilities for tourists: To promote the conservation of sea turtles, the use of tents, umbrellas, canopies, beach chairs, sun beds at the beach is restricted as such structures can stop female turtle from reaching suitable nesting location and/or effect the nest temperature due to shading (Shenoy et al., 2011). There are no accommodation facilities on the beach.

Also, the local governing body (Gram Panchayat) has recently prohibited the use and sale of thermocol plates and cups and is planning to ban the use of all plastic materials on the beach in the upcoming year.

Informal fishing ban: Before the conservation programme was in action, local fishermen used to fish during the nesting season,with purse seine, trawl, gill and cast nets in addition to hook and line gear. Turtles were entangled, drowned, bruised, killed or maimed after interactions with such gear and this was duly noted by SNM, resulting in an informal ban on fishing during the nesting season. The fishermen are provided with an alternative location (Harnai) to fish at a distance from the nesting beach.

No coastal illumination: Artificial light poses a threat to the turtles which rely solely on their visual stimuli for finding a route to the sea; they orient using the brightness of open seaward horizon and the illumination appearing from the reflection of stars and the moonlight on water. Artificial lighting on the beach and adjacent habitat create results in poor orientation and the same can happen to adult female sea turtles as they try to return back to the sea after nesting. Disoriented turtles still on land during the day may die by dehydration, predators, exhaustion and other such similar factors (Shenoy et al., 2011). Thus, it is imperative to bar any sort of artificial lighting on the beach in order to facilitate an efficient conservation programme. Keeping this in mind, SNM jointly with the Forest Department and Gram Panchayat of Velas has taken crucial steps to make sure that no artificial lighting is installed on the entire beach and on the approach road as well. A ‘No coastal illumination, water or sand sports’ resolution was passed in 2012-13 to help create an undisturbed habitat for the incubation of turtle nests and hatching of baby turtles.

No sand sports allowed: Sports like sand biking, paragliding, and beach volleyball causes sand to become compacted which causes difficulty for the sea turtles when nesting. Sea turtles lay their eggs at an optimal depth by digging a nest with their hind limbs, so hard sand requires more effort to dig which may result in reduced depth of excavation and sub-optimal incubation conditions. Sand sports may also uproots and-binding plants and result in sand erosion, and so are banned.

Although the conservation programme is at its peak and every possible effort is taken to conserve and save as many turtles as possible, last year there were a total of eight turtles found dead due to a variety of reasons which could be avoided if the following recommendations are adopted.

I express my sincere appreciation and gratitude to the President of SNM Mr Bahu Katdare for providing insight and expertise that greatly assisted this article. I’d like to thank Mr Mohan Upadhye for his invaluable contribution to this article. I thank, Mr YogirajRathod, for data and fact providing. I’m also indebted to Dr Sujit Sundaram for his excellent guidance and help in numerous ways. I gratefully acknowledge Dr Pradnya Sawant for offering constructive suggestions, comments and sound advice. Finally, I must thank, Swapnil Tandel, Bala Mhadgut, Dhanashree Bagade and my brother Piyush Pawar for their invaluable advice, help and continuous encouragement.