Reunion Island is located between Madagascar and Mauritius in the Indian Ocean. Its sand beaches, mostly located on the west coast, used to be important nesting sites for marine turtles, more precisely green turtles, but populations have drastically decreased since human colonisation in the 18th century (Dubois, 1669). Between the 1980’s and the turn of the century, only four nests had been recorded over all the beaches (Ciccione & Bourjea, 2006). Since 2004, this number increased to 25 on two beaches. This increase occurred after important rehabilitation efforts had been made since 1999 on potential nesting beaches, that consisted of campaigns against invasive species conducted before and during multiple planting programs for the rehabilitation of indigenous species involving schools. These efforts appeared to be successful as two thirds of the nesting activity was observed on rehabilitated beaches (Ciccione  & Bourjea, 2010; Jean & Ciccione, In Press). This progress may be taken as a sign of hope for marine turtle nesting activity on the island, although it remains very low when compared with other green turtle nesting sites in the region (Bourjea et al., 2006, 2007, 2015; Lauret-Stepler, 2007; Humber et al., 2010; Derville et al., 2015).

A National Action Plan for marine turtles over French territories of the Southwest Indian Ocean was developed in collaboration between regional and national experts as well as the ministry of environment and implemented in 2015. Specific actions have been identified for Reunion Island, among which the urgency to study, maintain and preserve any new nesting event that would occur on the island. In order to do so, Kelonia, the observatory of marine turtles of Reunion, had to make sure that any new turtle tracks would be quickly spotted and reported to scientists. 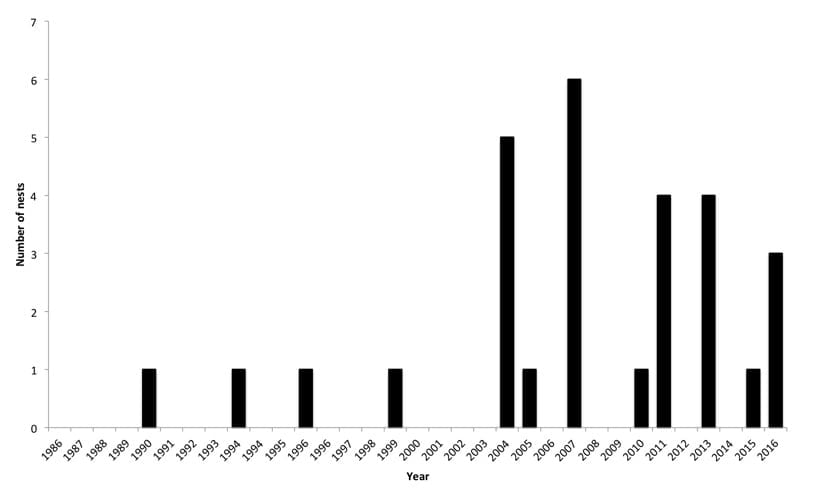 Thus, a network of volunteers was trained with the help of other environmental organisations. Some volunteers were known for being involved in volunteering activities elsewhere, and some just inquired how they could help while visiting Kelonia museum and care centre. A description of the program was also advertised on a website gathering environmental volunteeringopportunities (https://www.jagispourlanature.org/). Thanks to this network of over 30 people, it was possible to have volunteers patrolling the entire potential nesting beaches between September 2015 and April 2016. Patrols happened on a voluntary basis, at the time volunteers were available, and employees of Kelonia and CEDTM filled gaps without volunteer patrols in order to avoid more than 3 days without a patrol.

An online-shared timetable enabled volunteers to announce their intentions to patrol a beach and to confirm it occurred, as well as to add comments about the patrol. Any possible hindrance to nesting, such as the presence of stray dogs on the beach, or light pollution due to the presence of hotel or street lighting, was reported so that Kelonia could act if necessary. Some volunteers also used the opportunity of their patrols to remove rubbish from the beaches.

After a couple months of regular patrols, two volunteers found turtle tracks early on the morning of 27th November 2015. It had been 3 years without any recorded nesting attempt on Reunion despite sightings of breeding couples at sea. Patrols on this specifi c beach were then increased and even organised at night around two weeks after the first tracks had been seen in order to identify the nesting female and record nesting parameters. In this way it was also possible to make sure the beach was safe for a second nesting event. To increase the success of a new nesting attempt, volunteers asked the nearby hotel to turn off its light as it illuminated half of the 700m-long beach. They also paid attention to human activity to make sure that no one was wandering in the area. Kelonia’s team was also ready to intervene in case a nest was threatened with being flooded by a tropical storm or heavy swell as had happened in the past (Ciccione et al., 2008). When the turtle came back 2 weeks after the first nesting event, Kelonia’s scientific team was there to identify the turtle and took the opportunity to attach a satellite device on her carapace to learn more about her migration pattern. Much valuable information was collected this day and after. For example, the photo-identification process using TORSOOI application (www.torsooi.com; Jean et al., 2010) showed that the turtle was already known as ‘Emma’ and had already nested on this very same beach 3 years earlier.

Thanks to the dedication of the volunteers, it was possible to monitor the following nesting and hatchling events until the nesting season of this female ended in March 2016. Over these five months, monitoring fatigue did nevertheless occur and only some volunteers continued their patrols over the whole period. New volunteers also joined the program partway through the season. To motivate the volunteers network, they were invited to assist in the release of hatchlings and to participate in excavation of Emma’s nests. The volunteer team is now ready for the next nesting attempt and still motivated despite the low nesting activity on Reunion Island.

The monitoring activities described in this article are part of the National Action Plan for sea turtles. We are deeply grateful for the support of the “DEAL” (Direction de l’Environnement, de l’Aménagement et du Logement), which is the French governmental organisation that overlooks and funds the action plan. We are also grateful for the support of the Nicolas Hulot Foundation that funds and stimulates environmental volunteering actions nationwide. Moreover, we would like to address special thanks to all the volunteers who took part in the monitoring activities; they have been the keystones of this successful monitoring!