Many nesting sites for sea turtles in the Andaman and Nicobar Islands were severely affected by the December 2004 Indian Ocean earthquake and the subsequent tsunami. The coastline and the shore topography were severely altered in many of these islands, with the Nicobar group of islands undergoing submergence (Ramachandran et al., 2005), while coastal plates in some of the Andaman Islands were uplifted (CORDIO/IUCN, 2005; Kulkarni, 2005). In 2008, a long-term monitoring programme was initiated at Little Andaman Island to monitor the post-tsunami recovery of nesting leatherback turtles. The observations made at South and West Bay of Little Andaman suggested that leatherback nesting had recovered substantially after the 2004 tsunami, and the population appeared stable with some fluctuations (Swaminathan et al., 2011; Swaminathan et al., 2016).

Poor infrastructure and challenging logistics have limited sea turtle monitoring and conservation efforts in the Nicobars since the 2004 tsunami. Barring a few reports and surveys that indicated some beaches have re-formed, there is little information on the recovery of these nesting beaches and populations (Namboothri et al., 2011; IOSEA, 2012; Jadeja et al., 2015). Here, we report on our rapid surveys of nesting beaches throughout the Nicobar group that are being used by the four sea turtles found in this region (leatherback, green, olive ridley and hawksbill turtles), with a primary focus on leatherback turtle nesting on Great and Little Nicobar Islands. 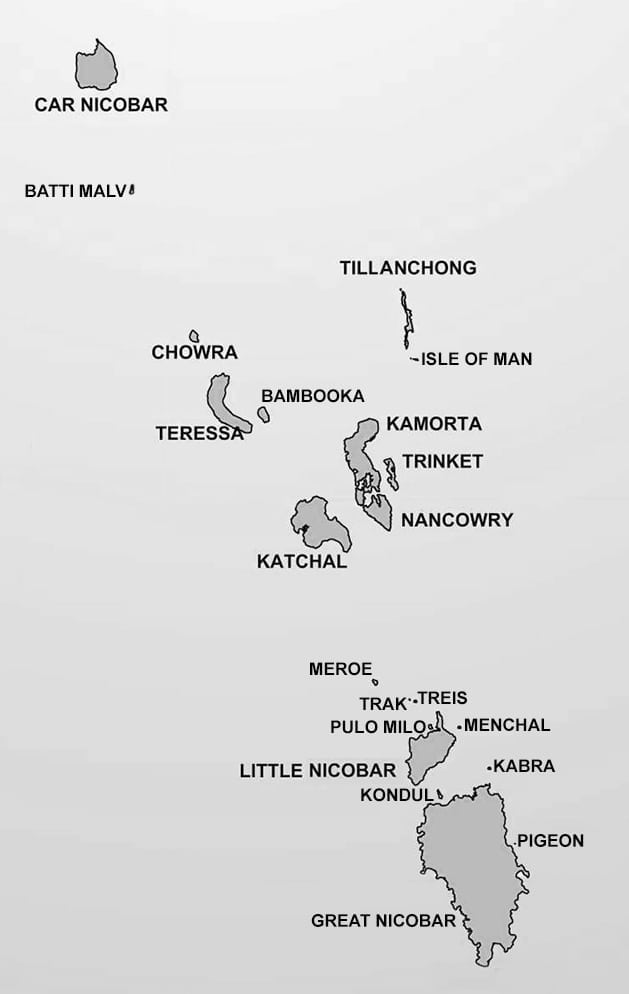 Local fishing boats were used to survey the coastline of islands, and the team carried out surveys by foot during daylight hours when a sandy beach was encountered. Upon encountering turtle tracks, the species was identified established based on track characteristics (Pritchard & Mortimer, 1999). While it is possible to misidentify olive ridley and hawksbill tracks, we classified each track to species using basic information such as the known seasonality of the different species and characteristics of the nesting habitat (Pritchard & Mortimer, 1999; Shenoy et al., 2011). Olive ridley turtles are known to nest from November to April and prefer wide-open beaches, similar to leatherback turtles; while hawksbill turtles are known to nest from July to December and prefer beaches with offshore reefs and typically nest near or in vegetation (Pritchard & Mortimer, 1999; Andrews et al., 2006a; Shenoy et al., 2011). After a thorough visual inspection of every nest mound, depth of body pits, abandoned body pits and nest chambers, we categorised each crawl as either a nest or a false crawl (Shenoy et al., 2011; Dodd, 2016). The location of each nest was recorded using a GPS.

All nests were examined for evidence of predation based on tracks and other signs. Wherever possible, the identity of the predator was established based on tracks. The surveys were non-invasive and did not involve any direct handling of the turtles, eggs or hatchlings. The surveys were conducted during the day and there were no instances of nesting directly observed. This was done due to logistical feasibility for conducting a survey over a large area and non-availability of necessary permits for the direct handling of nests and eggs.

Of the 21 islands in the Nicobar group, three islands (Pigeon, Kabra and Isle of Man) did not have any sandy beaches and three islands (Trak, Meroe and Batti Malv) were not accessible due to unfavorable sea conditions. We surveyed the remaining fifteen islands of the Nicobar group for sea turtle nesting activity. We recorded 2140 nests and 21 false crawls were recorded on 12 islands. The highest number of nests for all the four species were recorded on the Great Nicobar Island followed by the Little Nicobar Island.

A total of 1,068 leatherback nests were found on five of the fifteen islands surveyed (Table 2). The islands of Great Nicobar and Little Nicobar together comprised 94% of the total nests found in the Nicobar region. No nests were found on Teressa and Tillanchong Islands where leatherback nesting had been reported in the past (Andrews et al., 2006a; Chandi, pers. comm.).

Green turtles were found to be the most widespread species nesting in this region. The study identified 519 nests on 12 of the 15 islands surveyed (Table 1), including on Chowra, where green turtle nests had not been previously documented (Chandi, pers. comm.).

The surveys were designed to be conducted towards the end of the peak nesting season of leatherbacks and olive ridleys. The leatherback nesting season in the Nicobar Islands is October through March, with a peak in December/January (Andrews et al., 2006a). Olive ridley nesting runs from November through April, with a peak in January (Andrews et al., 2006a). The reported nesting season for green turtles for this region is May to September, peaking in June and July (Namboothri et al., 2012). The nesting season for hawksbill sea turtles commences in July and end by early December (Andrews et al., 2006a). Nests of both green and hawksbill turtles were documented during our survey period, suggesting that they may nest year round in this region, as green turtles do in nearby Thailand (Yasuda et al., 2008) and on Tromelin Island in the western Indian Ocean (Derville et al., 2015). Nevertheless, as our surveys were limited to a seven week stretch in the early part of the year, it is likely that we did not fully characterise nesting effort of green and hawksbill turtles in the region. 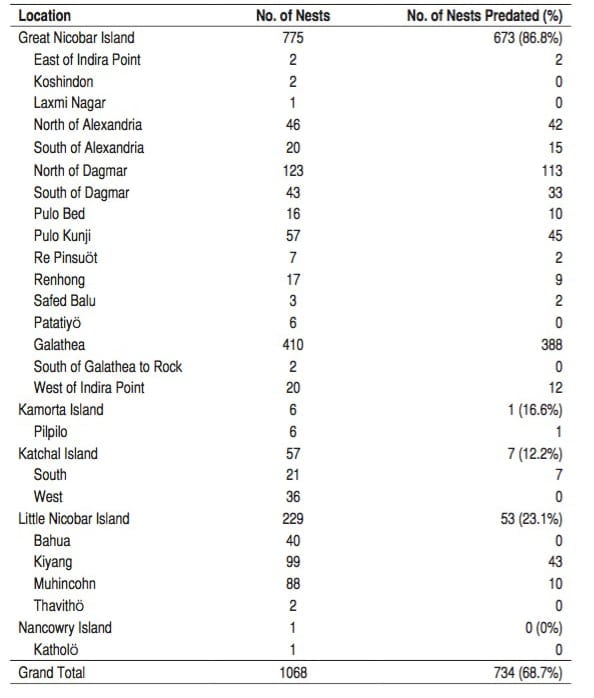 Prior to the 2004 tsunami, the islands of Great and Little Nicobar were important nesting sites for leatherback turtles (Andrews et al., 2006a). Harbouring 87% of all turtle nesting in the region, the beaches of Great and Little Nicobar Islands continue to be crucial nesting sites in the region for all four sea turtle species. The most important nesting sites include Galathea, Alexandria and Dagmar Bay on Great Nicobar Island and Pulo Kiyang and Bahua (previously referred to as Dahayu/Dahvu by Bhaskar (1994) and Andrews et al. (2006a)) on Little Nicobar Island. The current surveys revealed that most of the beaches in this region have formed again and leatherbacks continue to nest in high numbers (Table 3). The numbers for Alexandria and Dagmar from 2016 indicate a decline in comparison to the data from the 1978 to 2001. 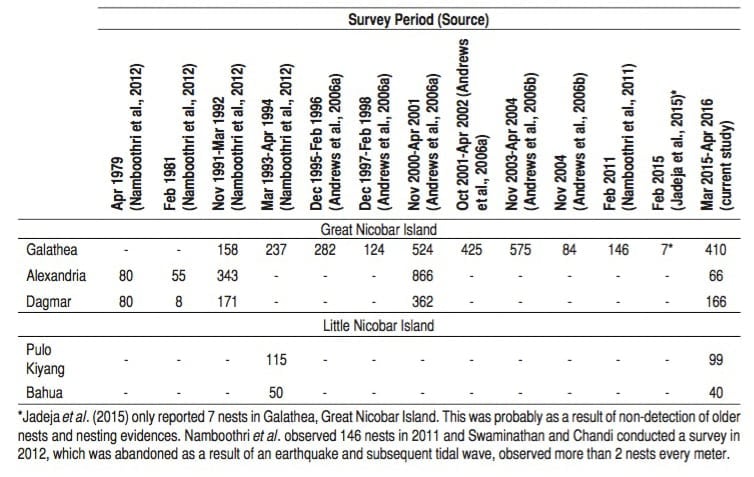 However, regions which were severely damaged by the 2004 tsunami still have dead trees and tree debris along the coast, particularly on Great Nicobar Island, which is likely obstructing sea turtles from accessing the nesting beach and also reducing the nesting area. Several previously known nesting beaches were either partially or fully inundated during high tide, forming creeks along the coast.

Of the 2,140 nests that were recorded in the Nicobar region, 57% (1,223 nests) were predated by either feral dogs, water monitor lizards or in some cases feral pigs. While monitor lizards are natural predators of leatherback nests and occur on many beaches, predation by feral dogs and pigs that once belonged to the Nicobari settlements that existed prior to the 2004 tsunami was found to be particularly high on the Great Nicobar Island. Namboothri et al. (2011) also observed that approximately 70% of the nests on Galathea were predated by feral pigs during the 2011 survey.

The ongoing leatherback monitoring programme in Little Andaman has revealed a stable increase in the nesting population, with over hundreds of nests laid every season, and also reformation of the nesting beaches (Swaminathan et al., 2016). The satellite telemetry study of ten leatherback turtles nesting in Little Andaman has indicated two corridors for migration, one on the southeastern corridor towards Papua New Guinea and Australia, and one along the southwestern corridor towards Madagascar and east coast of Africa (Namboothri et al., 2012; Swaminathan et al ., 2016). A long-term monitoring programme should be re-established at Galathea Bay to monitor the nesting beach and to understand long-term trends in nesting and reproductive efforts. Further studies on remigration intervals through tagging, genetic studies on population structures, and satellite telemetry studies to understand migration patterns of leatherback turtles nesting are required in this region. Accessibility of the nesting sites remains an issue, but the roads are in the process of being re-laid and should reach the nesting beach in the coming years. Several rapid and intensive surveys need to be carried out on prime nesting beaches where regular monitoring efforts are logistically impossible. In regions where predation from feral dogs and pigs are high, the feral animals need to be either controlled or culled to reduce the pressure.

We thank the Forest Department of Andaman and Nicobar Islands, including G.N. Sinha, PCCF (WL) Dr. K. Ravichandran CF (WL), Jabestin (Divisional Forest Officer), Great Nicobar Islands; all the rangers and forest staff for the logistical support; and the local staff and fishermen who accompanied us for our surveys We also thank the Wildlife Trust of India, Rapid Action Projects, staff for awarding the grant and supporting us in conducting this survey; the International Seafood Sustainability Foundation (ISSF) and the Marine Turtle Conservation Act Fund of the US Fish and Wildlife Services for the additional financial support for running the program activities.

Indian Ocean–South-East Asian (IOSEA) Marine Turtle Memorandum of Understanding. 2012. Assessment of the Conservation Status of the Leatherback Turtle in the Indian Ocean and South- East Asia.

Kulkarni, S. 2005. Interim Report on Tsunami Impact assessment of coral reefs in the Andaman and Nicobar Submitted to CORDIO. Pp. 1-7.