RECENT NESTING RECORD OF THE LEATHERBACK IN COASTAL MYANMAR 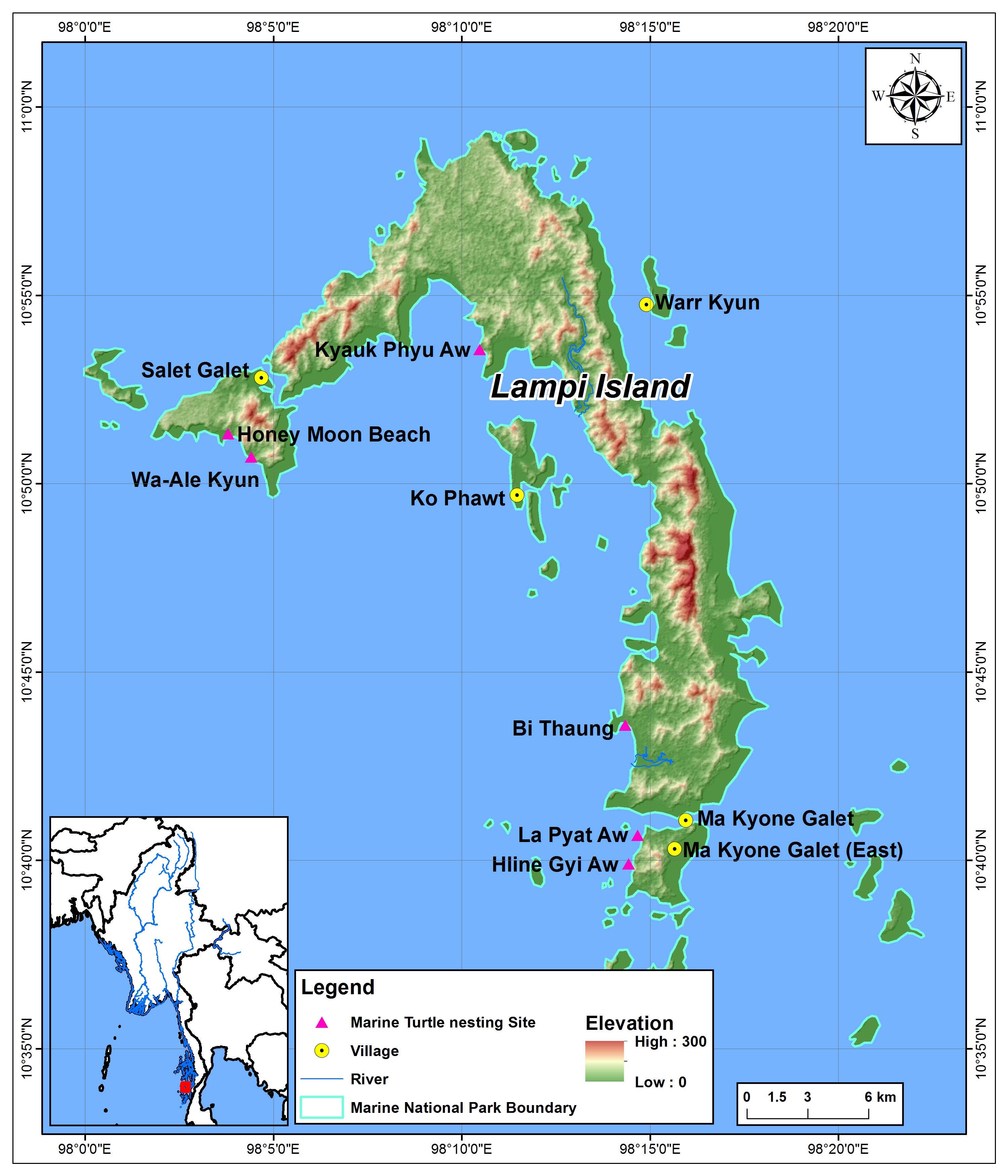 Given the ubiquity of these threats and the absence of effective law enforcement, Platt et al. (2015) recommended that community-based marine turtle conservation efforts be implemented in collaboration with eco-tour operators granted concessions within LMNP. In accordance with this recommendation, a turtle nest protection and monitoring program was initiated by Wa Ale Resort (Lampi Foundation) working together with NWCD during late 2015. As part of this effort, locally hired “Beach Wardens” conduct daily patrols of Wah Ale Kyun and Honey Moon beaches to search for signs of turtle nesting activity. During the 2016-17 nesting season, when freshly laid nests were encountered during patrols, they were marked and allowed to incubate in situ. Warning signs were posted at each nest and Beach Wardens provided 24-hour security to deter potential egg collectors. At the end of incubation, hatchlings exited the nests unassisted and made their way into the surf. On the morning a er primary hatchling emergence, each nest was excavated to search for dead hatchlings or those that had been unable to successfully exit the nest chamber; the latter were collected, held until nightfall, and then released. Basic data were recorded for each nest, including dates of egg-laying and hatchling emergence, number of hatchlings (dead and alive) and unhatched eggs found when the nest was excavated, and species identification.

During the 2016-17 nesting season, 22 C. mydas nests and one D. coriacea nest were found on Wah Ale and Honey Moon beaches. Nesting occurred from 16th November 2016 through 7th May 2017, a period coinciding with the annual dry season in southern Myanmar. The single leatherback nest was found on Honey Moon Beach on 27th December 2016 the morning a er the clutch was laid. Hatchlings emerged from the nest on the night of 22nd-23rd February 2017 following an incubation period of 59 days, within the range of eight to nine weeks given by Hirth (1980). Egg-laying occurred two nights before the New Moon (29th December 2016) and hatchlings emerged three nights before the New Moon (26th February 2017). Maxwell (1911) reported nesting by a single leatherback on 1st February; otherwise data on the reproductive phenology of this species are unavailable for Myanmar. Elsewhere in the region, leatherbacks nest from October through March with a peak in December (Limpus et al., 1984; Eckert et al., 2012; Swaminathan et al., 2017). Five live hatchlings and 11 unhatched eggs were found when the nest was excavated on the morning of 23rd February 2017. Yolkless eggs (Eckert et al., 2012) may have been among those that failed to hatch, although this was not determined when the nest was excavated. e hatchlings were held during the day and released shortly a er nightfall. Although the number of eggs in the nest was not determined, clutch size reported for other leatherback populations in the eastern Indian Ocean ranges from 29 to 140 eggs (Eckert et al., 2012).

To our knowledge this is the first confirmed nesting of D. coriacea in Myanmar in recent years, one of the few nesting records ever reported for the country (Maxwell, 1911), and further highlights the importance of LMNP to marine turtle conservation in the region (see also Platt et al., 2015). According to the IUCN (2017), recovery of the biologically relevant subpopulations of D. coriacea is dependent on successful conservation actions that mitigate current and future threats, especially those in breeding and foraging habitats. To this end, we recommend that nest protection and monitoring be continued at Wah Ale Kyun and Honey Moon beaches and extended to include Bi Thaung, La Pyat Aw, and Hline Gyi Aw beaches in the southern part of LMNP. These beaches host a number of turtle nests each year, yet remain unprotected and subject to illegal egg harvesting, especially the latter two sites which are easily accessible from Ma Kyone Galet Village (Platt et al., 2015). Additionally, we strongly reiterate our earlier recommendation (Platt et al., 2015) that existing fishing regulations within the protected area must be rigorously enforced, particularly the prohibition of commercial trawlers from within the legal exclusion zone. Outside of the protected area, marine turtle conservation hinges on the rigorous enforcement of regulations requiring the use of Turtle Excluder Devices on commercial fishing trawls (Aung Hlaing Win & Maung Maung Win, 2012; Holmes et al., 2014). Without dramatic improvements in the effectiveness of conservation measures, all species of marine turtles will likely be approaching extinction in Myanmar by 2030 (Limpus, 2012).

We are grateful to Director General Dr. Nyi Nyi Kyaw and NWCD Director U Win Naing aw for granting us permission to conduct this project and for their long-term commitment to conservation in Myanmar. We thank Colin Poole, U an Myint, U Saw Htun, and Daw Annie Chit for assisting with various aspects of this project. We also thank U Ba Tin for able assistance in the eld, Deb Levinson and Thomas Rainwater for providing relevant literature, and Lewis Medlock for reviewing an early draft of this manuscript. A special

debt of gratitude is owed by CK to Bald Head Island Conservancy (North Carolina, USA) for spurring a long-standing interest in marine turtles, which ultimately led to the conservation program at LMNP.