The waters of southeast Africa contain important habitats for several sea turtle species, including the leatherback Dermochelys coriacea, loggerhead Caretta caretta, hawksbill Eretmochelys imbricata, green Chelonia mydas, and olive ridley turtle Lepidochelys olivacea. Many of these species are of conservation concern (Rakotoniria & Cooke, 1994; Thorson et al., 2012; Nel et al., 2013) and vulnerable to regional threats such as fisheries by-catch or boat-strikes (Bourjea et al., 2008; Grantham et al., 2008; Pusineri & Quillard, 2008). To help in the development of effective conservation plans for these species, many conservation or research organisations have used satellite transmitters to help identify critical habitats for sea turtles (Harris et al., 2015; Robinson et al., 2016). Here, we review the movement patterns of sea turtles that have been tracked through satellite telemetry from their nesting beaches on the east coast of South Africa.

Sea turtles nest along most of the southeast African coast line. Leatherback and loggerhead turtles predominantly nest below 22°S from southern Mozambique to northern South Africa, while green, hawksbill, and olive ridley turtles predominantly nest above 22°S and throughout northern Mozambique (Costa et al., 2007). In addition, the nesting range of green and hawksbill turtles, although not olive ridley turtles, extends further north into Tanzania (Muir, 2005). The longest running monitoring program for nesting sea turtles in the region, and one of the longest running worldwide, is found in the iSimangaliso Wetland Park (hereafter referred to exclusively as iSimangaliso), South Africa. This project, which was founded in 1963, has predominantly used metal identification tags to monitor the nesting leatherback and loggerhead turtles (Hughes, 2010; Nel et al., 2013). In the past few decades, however, these mark-recapture methodologies have been complemented with several satellite tracking studies. 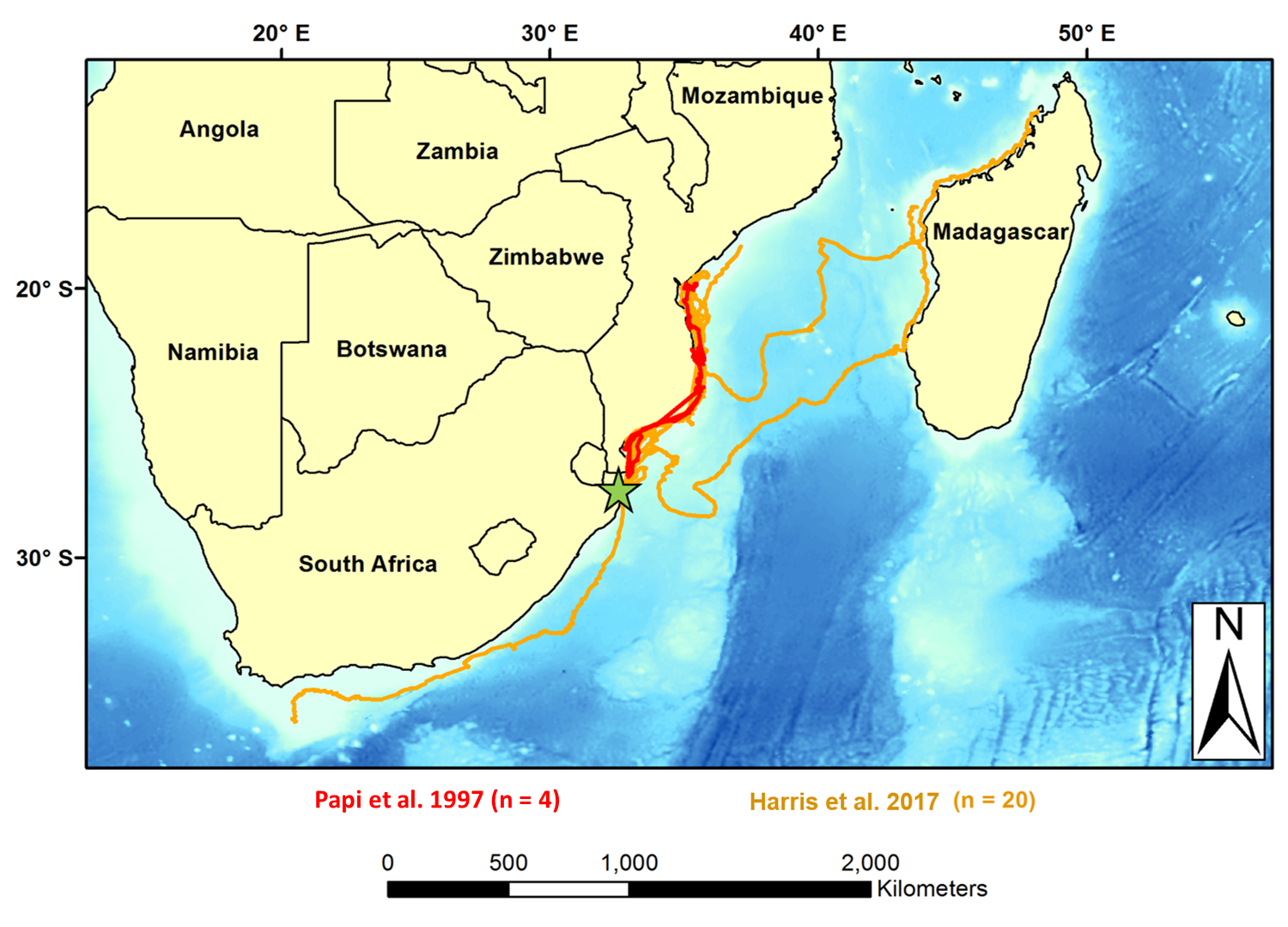 Figure 1. Movements of 24 loggerhead turtles tracked from their nesting beach in the iSimangaliso Wetland Park, South Africa (green star) between 1996 and 2013. Red lines represent the movements of four turtles that have been previously published in Papi et al. (1997). Orange lines represent the movements of 20 turtles that were tracked by the South African partnership and published in Harris et al. (2017).

After the completion of the nesting season, both loggerhead and leatherback turtles conduct long-distance migrations to foraging areas (Figure 1, Figure 2). Of the 20 loggerhead turtles that have been tracked since 2006, 17 have followed migratory routes in the coastal waters of Mozambique (Harris et al., 2017). Of the remaining three, two migrated across the Mozambique Channel and into Madagascar’s coastal waters and one migrated south to the coastal waters of the Cape of Good Hope (Harris et al., 2017). Evidently, this only represents a subset of all the foraging habitats utilised by this population. Of the 102 loggerhead turtles with metal tags that have been recaptured since 2012 outside of iSimangaliso, they have occurred over a far wider range of coastal habitats, stretching north from iSimangaliso into Mozambique, Tanzania, and Madagascar, and to lesser extent Kenya and Somalia (de Wet, 2012). 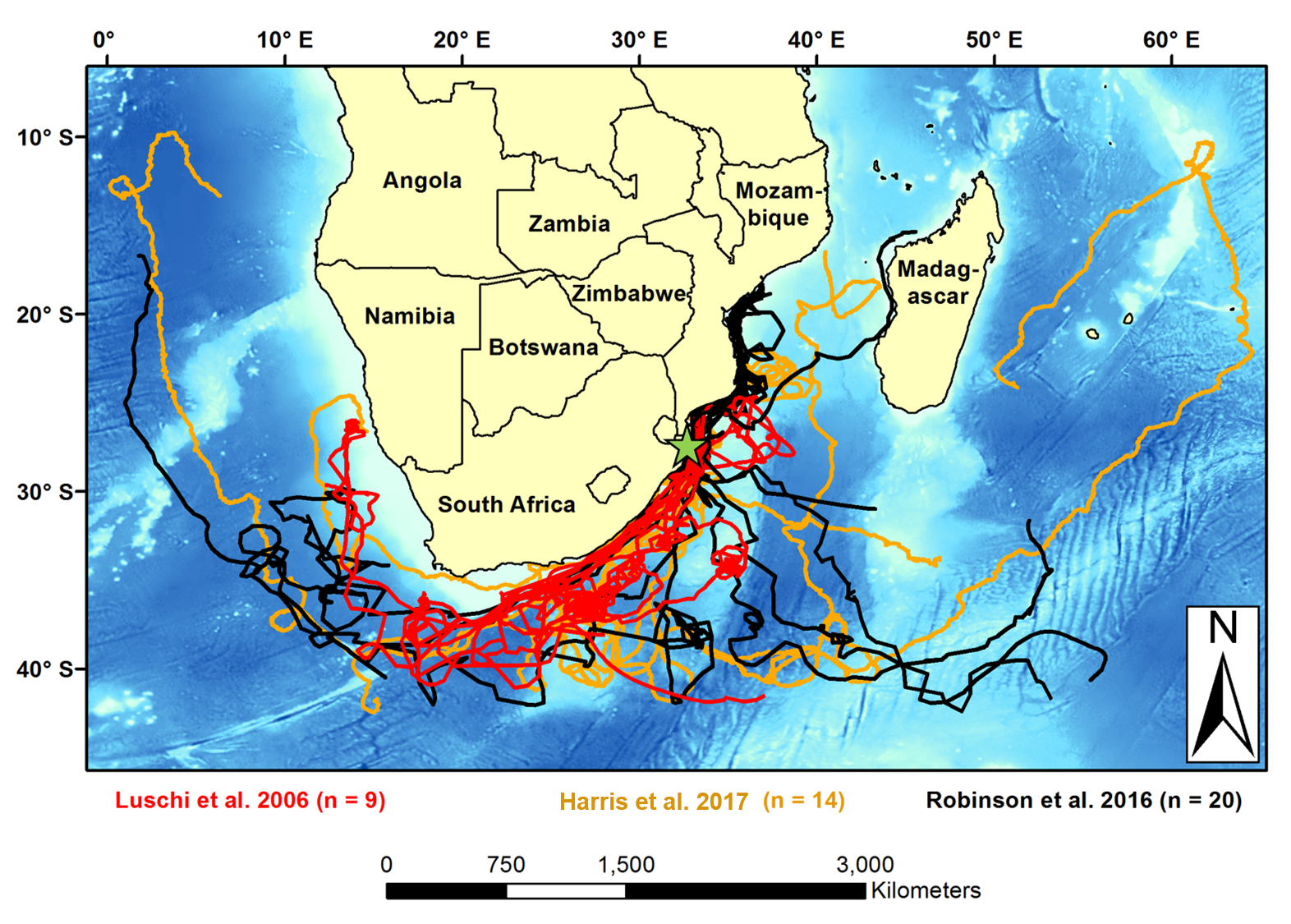 Other satellite tracking studies have also been conducted on the loggerhead turtles in the area to assess the navigational abilities of these animals when displaced from their capture location. In the first of these studies, loggerhead turtles were captured just before oviposition and relocated distances of up to 70km along the coast (Papi et al., 1997). All but one of these animals immediately swam back to the capture site to nest, thus demonstrating an impressive capacity for homing behaviour. In the second study, five animals were captured just before beginning their post-nesting migrations and relocated distances up to 2,193km, often offshore and far away from their presumed foraging areas in the coastal waters of Mozambique (Luschi et al., 2003a). Three of these turtles migrated and eventually settled in coastal foraging habitats, while two instead conducted nomadic wandering movements in the open-ocean of the western Indian Ocean (Mencacci et al., 2010). Presumably, these animals were unable to compensate their migratory behaviour to account for their earlier displacement (Luschi et al., 2003a).

In distinct contrast to the loggerhead turtles, the first satellite tracking studies on leatherback turtles revealed that almost all individuals migrated into pelagic habitats (Figure 2). After nesting, leatherback turtles would migrate south, following the Agulhas Current along the east coast of South Africa before heading east into the Agulhas Retroflection or west in the Benguela Upwelling System (Hughes et al., 1998; Luschi et al., 2003b; Lambardi et al., 2008). Once in open-ocean water, the leatherback turtles followed meandering movement patterns that were considered more “as a prolonged sojourn in vast feeding areas than as a true migration” in Luschi et al. (2006). Oceanographic analyses revealed that these movements largely followed the prevailing surface flow of the Agulhas Current (Luschi et al., 2003b; Lambardi et al., 2008), which flows south along the east coast of South Africa. However, these turtles did not drift passively within the currents, but were found to swim actively during most of their journey, albeit without being able to detect the direction of the flow that they were being entrained by (Galli et al., 2012). Satellite telemetry data also revealed that turtles dove almost continuously throughout their journey, mainly at depths shallower than 200m, but with occasional deep dives that could exceed 1,000m (Sale et al., 2006; Robinson, unpubl. data).

The leatherback and loggerhead turtles of South Africa have been satellite tracked intensively for many years now and much is now known about their in-water behaviour. Interestingly, some of the earliest paradigms concerning the habitat preferences of these species, e.g. leatherback turtles as open-ocean wanderers and loggerhead turtles as coastal specialists, were largely established following studies conducted on these populations (Luschi et al., 2006). Through continued tracking however, it is now clear that the migratory patterns of both species are far more diverse than originally considered. This highlights how far we have come in understanding the spatial ecology of these animals and how much there is still to learn. For example, satellite tracking studies in iSimangaliso are yet to investigate the movements of male or non-adult leatherback or loggerhead turtles in the region. Green and hawksbill turtles are also commonly encountered in the waters of iSimangaliso, yet no published studies have reported on the movement patterns of these animals.