Since 2012 we have been satellite tracking nesting green turtles in the Chagos Archipelago, Indian Ocean which forms part of the British Indian Ocean Territory (BIOT). In 2010, the UK Government created a massive Marine Protected Area (MPA) around this archipelago, spanning 640,000km2, making it the World’s largest MPA at the time (Sheppard et al., 2012). We have conducted one of the first satellite tracking studies of a migratory species within this MPA to assess use of protected versus unprotected areas. We describe here the initial results from eight tags deployed in 2012.

Satellite tags were attached to nesting green turtles on the island of Diego Garcia (7º25´S, 72º27´E) within the Chagos Archipelago. We describe here initial results from the first deployments in October 2012 and mention subsequent deployments in the discussion. Tagging was done on a beach that supports the highest numbers of nesting turtles in the archipelago. In short, turtles were first located while ashore nesting at night. Upon their return to the sea they were restrained in a large open topped and bottomless wooden box. The carapace was cleaned with acetone and then lightly sand-papered, in order to provide a better surface for attachment of the tag. The tags were then attached with quick setting epoxy and covered with anti-fouling paint (see Hays et al., 2014 for full details). Once epoxy had hardened and the paint dried the turtle was allowed to return to the sea. We used two models of Fastloc-GPS Argos satellite tag: (a) SPLASH10-BF, Wildlife Computers, Redmond, Washington USA and (b) model F4G 291A, Sirtrack, Havelock North, New Zealand. These tags provide high resolution Fastloc-GPS locations accurate to a few 10s of meters (see Dujon et al., 2014).

At the end of the nesting season, turtles departed to a broad range of destinations. Four turtles travelled more than 2,500km westwards from the Chagos Archipelago to the Amirantes Islands, which form part of the Seychelles; two turtles travelled >3,800km westwards to the coast of Somalia on mainland Africa; one turtle travelled >1,000km northwards to the Maldives, and one turtle travelled 166km to foraging grounds on the Great Chagos Bank, which lies north of the original nesting beach (Figure 1). Our satellite tracking data also enabled us to assess home range and diel activity patterns of the turtles at their various foraging grounds throughout the region (Christiansen et al., 2016). On their foraging grounds, we have found that turtles tend to use fairly restricted home-ranges only a few kilometres in extent, often with distinct night-time resting and daytime feeding areas. 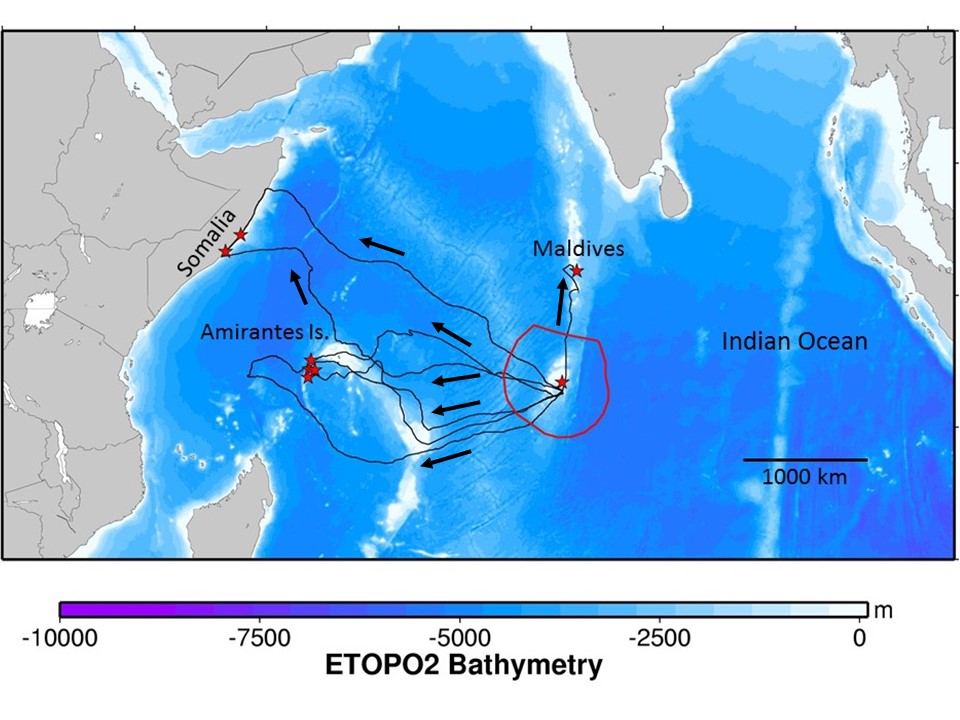 Our initial results emphasise the value of the full protection sea turtles currently receive within the Chagos MPA. These findings have been reiterated by our subsequent deployment of more satellite tags on adult green turtles in July 2015 (see Esteban et al., 2017). We have shown how the Chagos MPA protects adult green turtles during the breeding season because they remain within the MPA close to their nesting beaches. Furthermore, some adults clearly travel to foraging grounds within the MPA and so will remain in protected areas outside the breeding season. In addition, the protection of nests located on beaches in the heart of the MPA will help increase hatchling emergence (i.e., the proportion of eggs laid that result in hatchlings successfully emerging from nests).

Our results show how international co-operation is needed to help the conservation of wide-ranging species and highlight the value of the Memorandum of Understanding on the Conservation and Management of Marine Turtles and their Habitats in the Indian Ocean and South-East Asia (IOSEA Marine Turtle MoU). Our satellite tracked turtles have travelled to countries including the Seychelles, Kenya, Somalia, Madagascar, Tanzania and the Maldives. Our conclusion that even the largest MPAs should be supplemented by targeted smaller MPAs or national legislation as well as international agreements, is likely to apply to a broad range of marine migrants spanning several taxa.