4Centre for Ecology and Conservation, University of Exeter, Cornwall, UK

The Egyptian Red Sea is home to five species of marine turtles, however only the endangered green turtle (Chelonia mydas) and the critically endangered hawksbill turtle (Eretmochelys imbricata) are frequently observed and known to feed and nest in the Egyptian waters (Frazier & Salas, 1984; Hanafy, 2012). The less common species are the olive-ridley turtle (Lepidochelys olivacea), the loggerhead turtle (Caretta caretta) and the leatherback turtle (Dermochelys coriacea) (Frazier & Salas, 1984; Mancini et al., 2015a).

Very little is known about nesting and feeding activities of hawksbill turtles in the Egyptian Red Sea.

Frazier & Salas (1984) reported two main nesting sites in Shedwan and Giftun Islands (Hanafy & Sallam, 2003), with 50 to 100 nests estimated per year (PERSGA/GEF, 2004). No information is available on their post-nesting migratory routes.

More information is available on green turtle nesting and feeding activities. Feeding aggregation sites have been identified in various shallow lagoons and bays along the

Little is known about movements of green turtles within the Egyptian Red Sea, as only four adult females have been tracked by satellite telemetry after nesting on Zabargad Island in 2010 (Attum et al., 2014).

Zabargad Island, located in the Southern Egyptian Red Sea, is approximately 71km from the mainland coast (Figure 1) and covers an area of around 4.5 square-km. The island is part of the Gebel Elba Protected Area. Access on land is forbidden, however, due to low enforcement, fishers are known to stay on the island at night. Carcasses of turtles have been found on the nesting beach, suggesting that poaching is on-going although the scale of such a threat is unknown (Mancini & El-Sadek, pers. obs.). Mooring facilities for safari boats are located in front of the east end of the nesting beach and diving activities usually take place around the island. From May to October, a relatively stable population of approximately 200 green turtles lay eggs on the sandy beach (3.5km long) located on the southern side of the island (Hanafy & Sallam 2003; Hanafy, 2012; EEAA, unpubl. data). 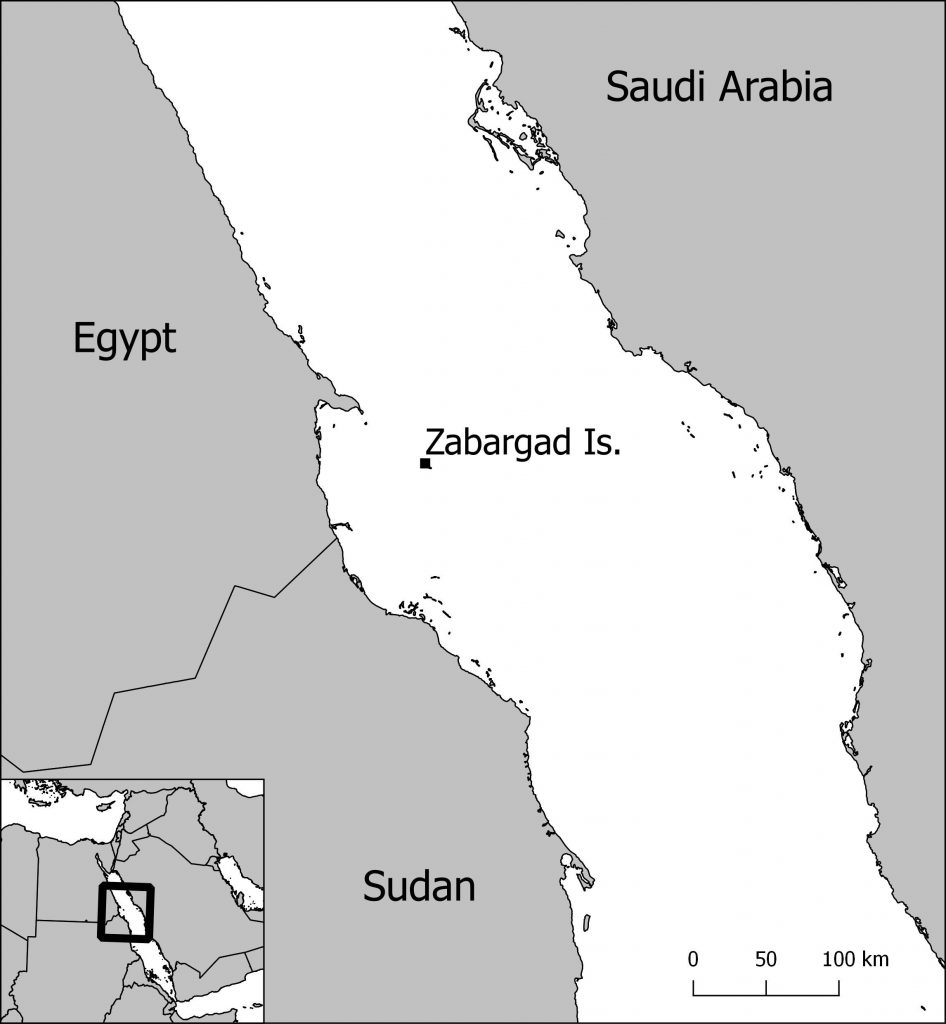 Table 1. Details of the four green turtles tagged and released after nesting on Zabargad Island, Egypt, on 25th July 2010. The migration distance refers to the minimum distance (sum of distances between each migration point) travelled by each turtle during the tag deployment period. (Modified from Attum et al., 2014.) 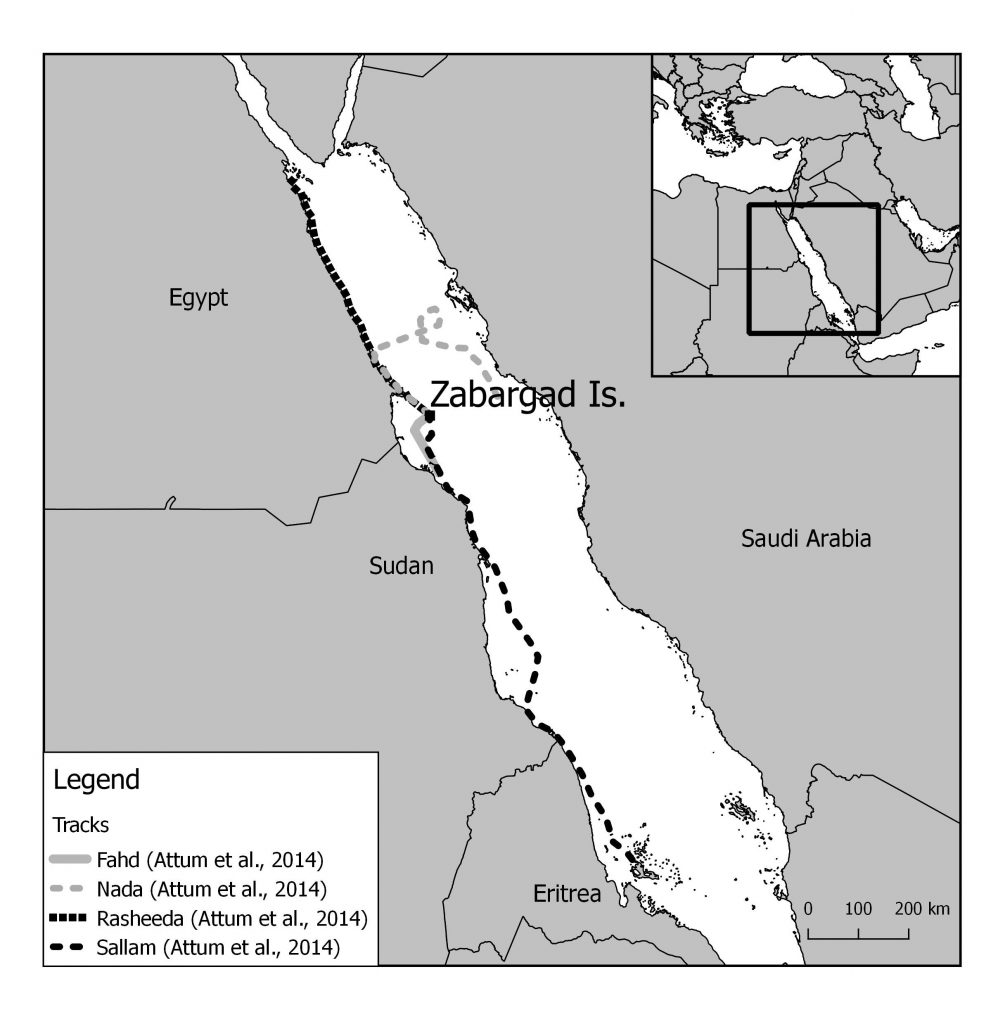 Figure 2. Migratory patterns of green turtles tagged and released from Zabargad Island (Egypt) in 2010. (Based on data from Attum et al., 2014.)

Green turtles tagged in the Egyptian Red Sea executed short-to-long range (from 150 to 940km) post-nesting migrations in order to reach their preferred feeding grounds. The four turtles tagged by Attum et al. (2014) showed that Zabargad Island may act as a hub for adult female turtles feeding in at least four of the seven countries encompassing the Red Sea. In addition, two of the four turtles in that study moved past suitable feeding grounds during their post-nesting migration, which suggests that those turtles may be exhibiting fidelity to particular feeding and nesting sites and not simply frequenting the most proximate areas (Attum et al. 2014).

Finally, while no turtle tracked from locations outside the Red Sea have migrated as far north as Egyptian waters (see Rees et al., 2012), nesting green turtles tagged in Ras Baridi (Saudi Arabia) were found to migrate to Egyptian waters for feeding (L. Glower, pers. comm.). This seems to suggest that feeding grounds along the Egyptian Red Sea coast are shared by green turtles coming from different nesting areas, therefore highlighting their importance for conservation management of populations within the Red Sea.

Further satellite tracking studies should focus on the virtually unknown hawksbill populations, for which only scattered and anecdotal data are available. Furthermore, migratory studies should focus not only on adult females but include also adult male and juvenile individuals of both species for which almost no information has been collected. Currently, a photo-identification study conducted between 2011 and 2013 shows high site fidelity of both green and hawksbill adult male and juvenile individuals, with only one juvenile green turtle moving to a different feeding area during the study period (Mancini et al., In Prep.). Further data are needed in order to cover migratory patterns of all species and size classes and identify important turtle areas.

The use of satellite tracking equipment is not easy in Egypt and no clear procedure currently exists to apply for permits. Tracking and GPS devices are generally considered military equipment and would require the approval of the Ministry of Defence. However, when a program is run in collaboration with the Ministry of Environment (i.e. EEAA) no permit is required (M. Hanafy, pers. comm.).

We would like to thank Dr Mahmoud Hanafy for providing information on how to obtain permits for research programmes in Egypt.

Hanafy, M.H. 2012: Nesting of marine turtles on the Egyptian beaches of the Red Sea. Egyptian Journal of Aquatic Biology & Fisheries 16: 59–71.

Hanafy, M.H. & A. Sallam. 2003. Status of marine turtles nesting on the Egyptian beaches of the Red Sea. National Report to PERSGA, 45 pp.

Mancini, A., I. Elsadek, & B. Madon. 2015b. When simple is better: Comparing two sampling methods to estimate green turtles abundance at coastal feeding grounds. Journal of Experimental Marine Biology and Ecology 465: 113–120.

PERSGA/GEF. 2004. Regional Action Plan for the Conservation of Marine Turtles and their Habitats in the Red Sea and Gulf of Aden. PERSGA, Jeddah.

Rees, A. F., A. Al-Kiyumi, A.C. Broderick, N. Papathanasopoulou & B.J. Godley. 2012. Each to their own: Inter-specific differences in migrations of Masirah Island turtles. Chelonian Conservation and Biology 11: 243-248.