1Centre for Ecology and Conservation, University of Exeter, Penryn, UK

2Ministry of Environment and Climate Affairs, Muscat, Sultanate of Oman

The Masirah Turtle Conservation Project (MTCP) aimed to establish a population assessment of the four species of turtle that nest on Masirah Island as well as produce environmental education packages and a General Management Plan for the Island, based on sustainable development. The 5-year project (2004-2008), the first of its kind in the region, worked closely with local authorities, fisher’s associations and schools as well as the people of Masirah. An integral part of the project involved the use of satellite telemetry to track loggerhead, olive and green turtles that nested on the Island.

The transmitters were programmed to be continuously on for the duration of the battery life, with transmissions suppressed when the turtles were submerged through use of an on-board saltwater switch. Tracking data were collected and managed through the Satellite Tracking and Analysis Tool (STAT; Coyne & Godley, 2005).

As indicated above, analysis and reporting of tracks from these three species have been previously published (Rees et al., 2010; Rees et al., 2012a, 2012b). The dispersed end-points of the tracks for the different species and individuals ranged from the southern Red Sea to the vicinity of the Strait of Hormuz (entrance to the Arabian Gulf). No turtles migrated eastwards to the Indian sub-continent (Figure 1). For loggerhead turtles the main findings were that they largely remained in oceanic habitats with a focal area between Socotra Island and mainland Arabia (see also Tiwari et al., 2018). For olive ridley turtles, the main findings were that they mainly migrated to neritic habitats often within 120km of the nesting site, and that there was a suggestion that foraging site selection had carry-over effects on adult body size. For green turtles the main findings were that both individuals migrated over 2,400km into the Red Sea, but selected different foraging grounds separated by several hundred kilometres. 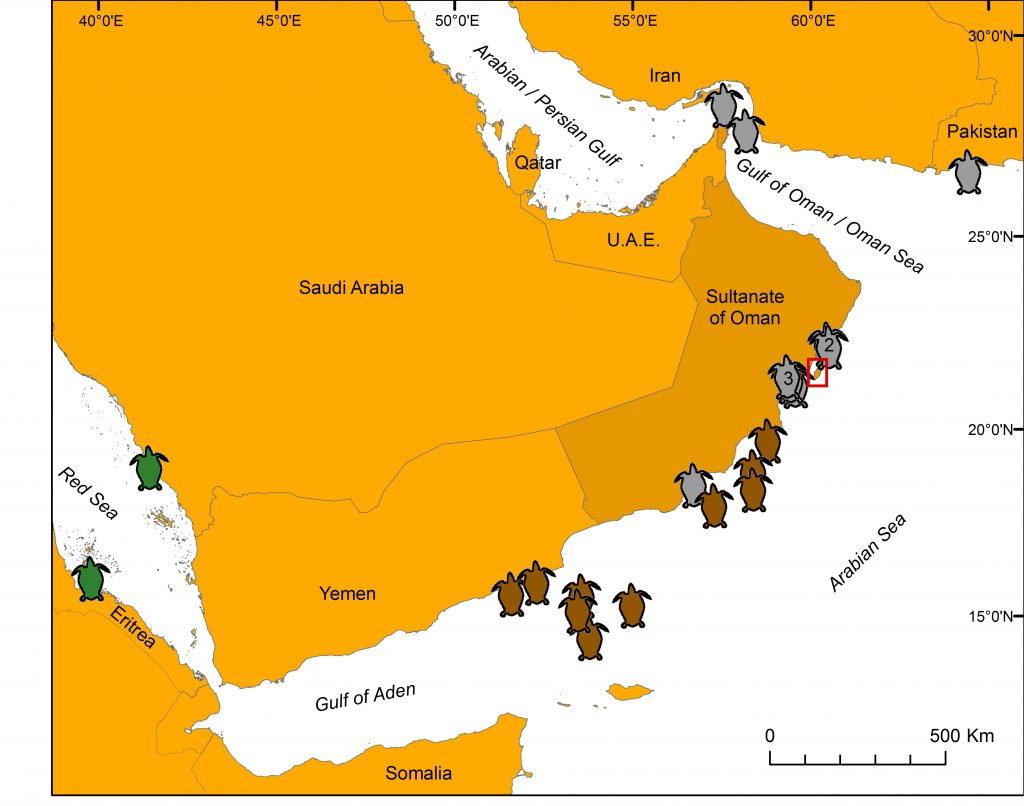 Since the initial MTCP tracking study, extensive tracking of nesting loggerhead turtles has been undertaken by the Masirah Conservation Project and continues to date (Tiwari et al., 2018). The tracking results, when analysed and published, should benefit practical conservation and management of this threatened population significantly.

No further tracking of green turtles from Masirah Island has taken place since the MTCP work in 2008, so interpretation of overwintering and foraging hotspots of that population remains hampered by small sample size. There is a pressing need for additional turtles to be tracked from the island to verify the single migratory route exhibited by both turtles from this area and to confirm the importance of the coastal waters of Oman and Yemen as a critical migratory corridor for this population. However, additional green turtles have been tracked from Ras Al Hadd, the species’ main nesting area in Oman (Ross & Barwani, 1982). Some information on those tracking efforts is outlined in Antonopoulou & Pilcher (2018) and combining these data with the published data from the Masirah population will benefit understanding of regional, metapopulation behaviour of this species.

No further tracking of olive ridley turtles nesting on Masirah Island has been undertaken. Consequently, no progress has been made on confirming the influence on foraging area on body size, suggested in results of the MTCP project, and the relative importance of Oman both for nesting and foraging locations of this species lacks verification. Further tracking of nesting females in combination with extensive tissue sampling for stable isotope analysis (e.g. Zbinden et al., 2011) would facilitate broad-scale interpretation of the behaviour and distribution of this unique Arabian population.

It should be noted that the hawksbill turtle, which also nests on Masirah Island, was not tracked as part of the MTCP but has subsequently received some attention with a total of 10 individuals tracked from the Island in 2011 & 2012. Data on these turtles have been published in Pilcher et al. (2014) and Antonopoulou & Pilcher (2018).

The MTCP was funded by the TOTAL Foundation and TOTAL SA, Muscat Branch. The authors wish to thank Salim Al Saady who helped facilitate the project as Director of Biodiversity of the then Ministry of Regional Municipalities, Environment, and Water Resources (now the Ministry of Environment and Climate Affairs–MECA); Khamis Al Farsi, municipal leader of Masirah Island; Salman Al Farsi and the municipality wildlife rangers who assisted with locating and tagging the turtles; and Mussalam Al Madhousi who coordinated activities on the island. We would also like to thank Jean-Claude Farina of TOTAL SA, Muscat Branch; Guy Sallavyard, Gina Sardella-Sadiki, and Laure Fournier of the TOTAL Foundation; and Henri Crouhade, Hubert Faure, and Maurice Drapier of IPEDEX/ SPIE who each supported implementation and showed personal interest in the projects. Permission to work with turtles was granted by Oman’s MECA.