In the Arabian (Persian) Gulf, hereafter referred to as the Gulf, hawksbill turtles (Eretmochelys imbricata) nest at several key sites in Saudi Arabia (Miller, 1989; Pilcher, 1999), on a number of Kuwaiti islands (Meakins & Al-Mohanna, 2004), the Iranian coast and islands (Mobaraki, 2004), Qatar (SCENR, 2006; Pilcher et al., 2008), and the United Arab Emirates (UAE) on islands off Abu Dhabi and Sharjah (EAD, 2007; Pilcher et al. 2014a). In the Gulf of Oman and the Arabian Sea, nesting hawksbill populations are present in the Daymaniyat Islands and Masirah Island (Ross & Barwani 1982; Salm et al., 1993; Rees & Baker, 2006). The Gulf is a relatively shallow water body that undergoes extreme water temperature fluctuations with surface waters typically exceeding 30oC for sustained periods during the summer. Monitoring behavior patterns of marine turtles within these conditions can offer valuable insights on how turtles might adapt to climate change and elevated global temperatures in other parts of the world.

The Marine Turtle Conservation Project was implemented as a partnership between the Emirates Nature-WWF, formerly known as Emirates Wildlife Society-WWF (EWS-WWF), the Marine Research Foundation (MRF), as well as a number of other organisations in the region:

• Iran: Wildlife and Aquatic Affairs Bureau of the Department of Environment.

The overall goal of the project was to identify post-nesting migratory routes and key foraging grounds for hawksbill populations in the region. To achieve this, the project used satellite telemetry from 2010-2013 to monitor 75 post-nesting female hawksbill turtles tagged at various nesting sites in four countries in the Arabian region; UAE, Oman, Iran and Qatar (Table 1). These sites (Figure 1) were selected based on previous published literature and expert advice offered by project partners. This allowed the project to obtain differing migration patterns and to determine whether turtles from nesting sites spread across the region used the same or differing feeding sites.

Table 1. Summary of PTT deployment dates and locations. Deployment coordinates are given in decimal degrees.

The project used Kiwisat 101 Platform Terminal Transponders (PTTs) made by Sirtrack Ltd. The PTTs were attached using a modified version of the Balazs et al. (1996) fiberglass and resin attachment. Satellite signals were sourced from Service Argos with Kalman filtering (www.argos-system.com) and automatically downloaded by the Satellite Tracking and Analysis Tool (Coyne & Godley, 2005). Table 1 describes the number of PTTs deployed per year and by location. 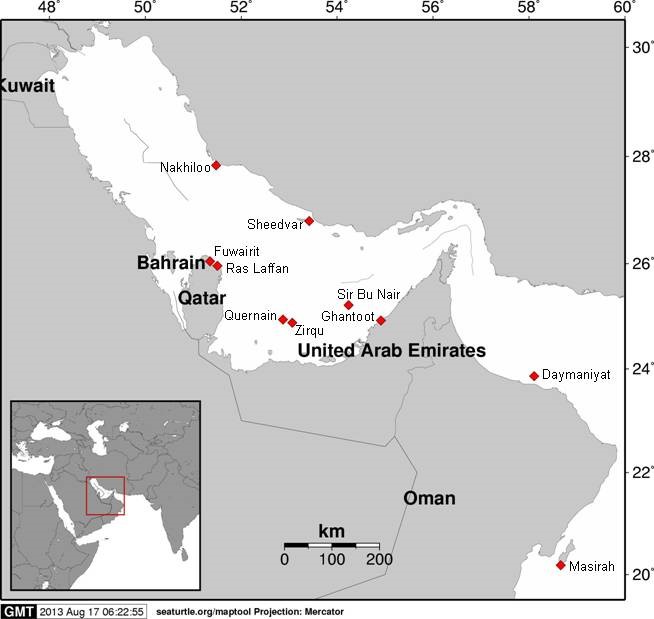 Figure 1. Locations where PTTs were deployed on hawksbill turtles in the Arabian (Persian) Gulf. (Source: EWS-WWF, 2015.)

The project identified a number of foraging grounds, primarily in the southwest corner of the Gulf, across the waters of the UAE in Abu Dhabi, as well as areas shared by the UAE, Saudi Arabia, and Qatar (Figure 2). Only a few turtles traveled into the Gulf of Salwa (between Qatar and Saudi Arabia) or northwards towards Saudi Arabia and Kuwait. Outside the Gulf, hawksbill turtles utilised discreet foraging sites along the Omani coast south of Masirah Island (Figure 3).

In the Gulf, the foraging habitats were spread over large areas, but at the individual turtle level typically ranged over only 40-60km2 with core areas of only 3-5km2. Home ranges and core areas for Omani turtles were substantially smaller than those for Gulf turtles, suggesting Oman turtles have access to higher quality foraging areas than those turtles living in the climate-challenged Gulf, where sea surface temperatures can exceed 35oC in the summer and fluctuate over 5-10oC in a period of months, and therefore likely did not need to conduct wide-spread foraging movements (Pilcher et al., 2014b).

Another interesting finding of this project was the temporary movement of turtles from shallower warm waters to deeper and cooler waters during summer months (June-August), when sea surface temperatures averaged 33.5oC and peaked at 34.9oC (Pilcher et al., 2014a). This behavior was recorded in 55 turtles out of 65 tracked inside the Gulf over three consecutive years. and turtles typically returned after 2-3 months to resettle at the same foraging grounds. Figure 4 shows such a typical migration loop track by a hawksbill turtle nesting in Qatar. This type of behavior was unique only to turtles foraging in the Gulf, indicating that these populations employ thermoregulatory responses which take them out of high temperature and potentially physiology-threatening conditions (Pilcher et al., 2014a). 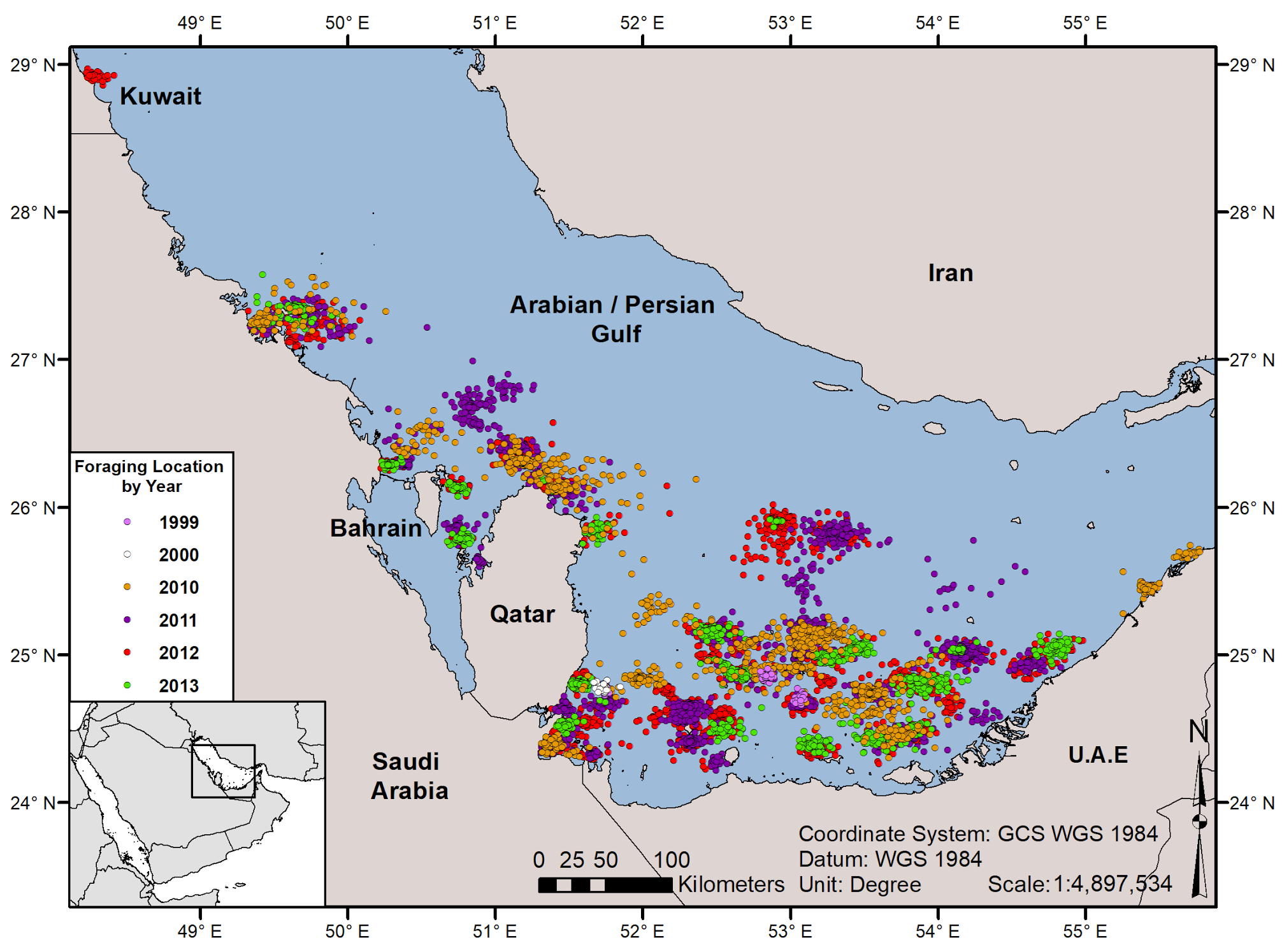 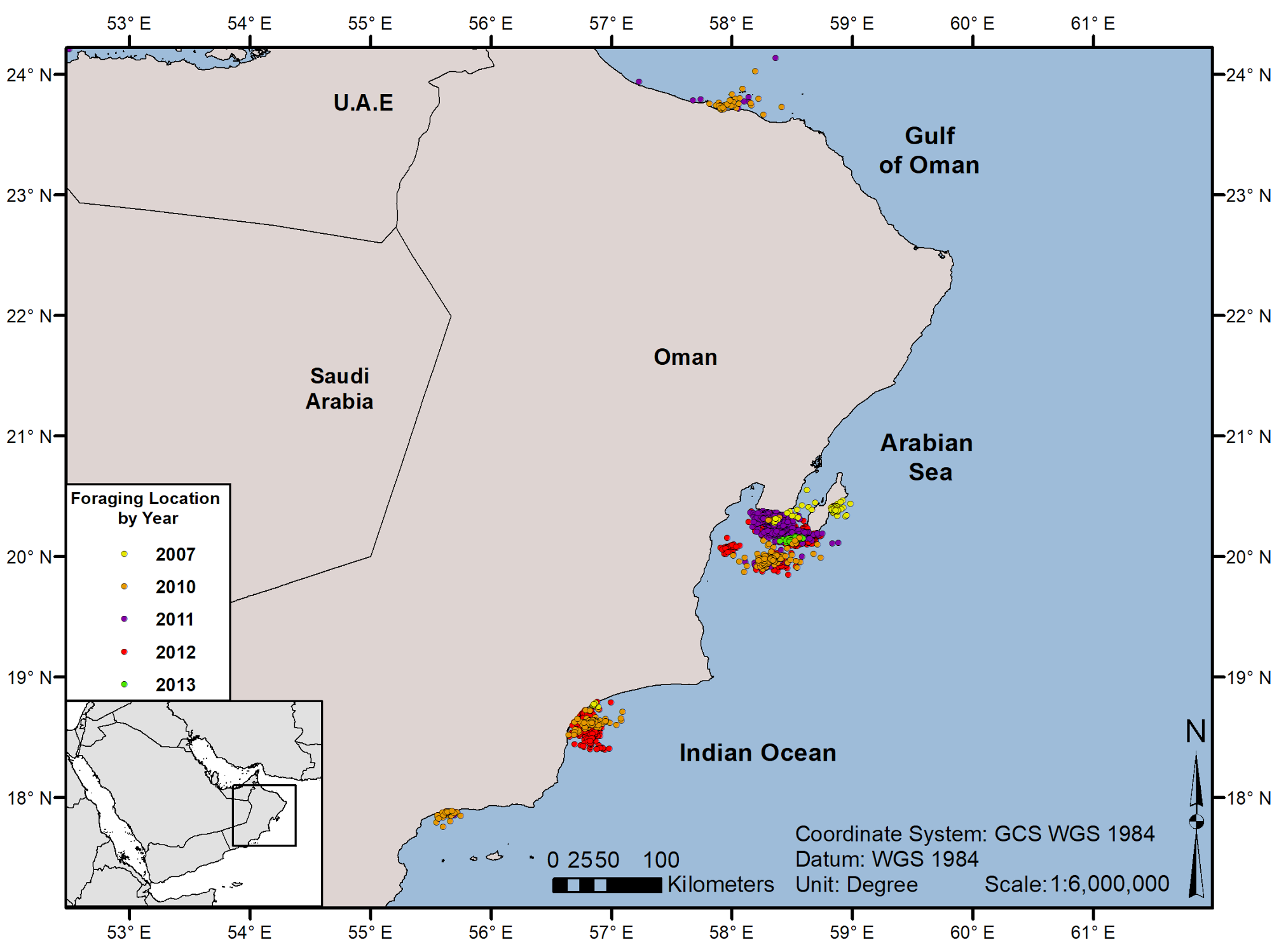 Figures 2 and 3. Locations of individual hawksbill turtle foraging grounds in the Gulf and off the coast of Oman. (Source: EWS-WWF, 2015.)

The information gathered by the project helped improve our understanding of at-sea hawksbill habitat and behavior in a climate-challenged environment, where extreme high and low temperatures cause physiological stress and reduced growth rates for both turtles and prey species, and contributed to the identification of habitats critical for the survival of these populations. In an effort to streamline our findings with policy decision making processes, the critical habitats identified by the project were characterised as ‘Important Turtle Areas’ (ITAs) and were shared and integrated in a number of biodiversity conservation planning and policy related initiatives. Such initiatives were: (i) The process to describe ‘Ecologically and Biologically Significant Areas’ (EBSAs) as part of the Convention of Biological Diversity (CBD), (ii) Sites in the UAE nominated under the Indian Ocean and South East Asia Memorandum of Understanding for the Conservation of Marine Turtles (IOSEA MoU), and (iii) Local spatial planning and conservation prioritization initiatives, as well as integration of findings into local GIS databases managed by local Environmental Authorities.

The project results can be further used to prioritise marine turtle conservation action by government and conservation agencies, as well as to support spatial analysis on risk assessments for turtles in the face of urban and industrial development, climate change, fishery pressure, and shipping activities. 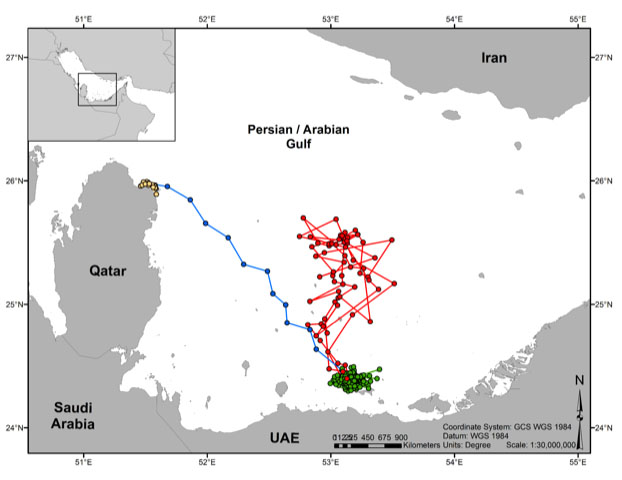 NEXT PHASE OF RESEARCH FOCUSING ON GREEN TURTLE POPULATIONS

Following on from these results, in 2016 Emirates Nature-WWF commenced a new phase of research focusing on green turtles (Chelonia mydas) in the region with the launch of the Gulf Green Turtle Project. This project is again implemented in partnership with MRF and a number of partner organisations in the region: the Environment Agency – Abu Dhabi, Environment Protected Areas Authority – Sharjah, Environmental Protection and Development Authority – Ras Al Khaimah, Environment Society of Oman, Five Oceans Limited, Ministry of Climate Change and Environment – UAE, Ministry of Environment and Climate Affairs – Oman.

The new study aims to gather information on green sea turtles, as these comprise the most abundant turtle species in the inner Gulf region and the second most abundant in Oman. The project will use multiple methods such as satellite tracking, genetic analysis and laparoscopic research targeting reproductive adults in foraging areas as well as post-nesting females. Up to now, the project team deployed 46 satellite transmitters on turtles at various sites. Early data highlights the regional importance of the Oman rookery, as well as linkages between Oman and the UAE’s nesting and foraging grounds. This project is in its final year of implementation and aspires to engage with key governmental agencies and stakeholders on the research findings and relevant recommendations.